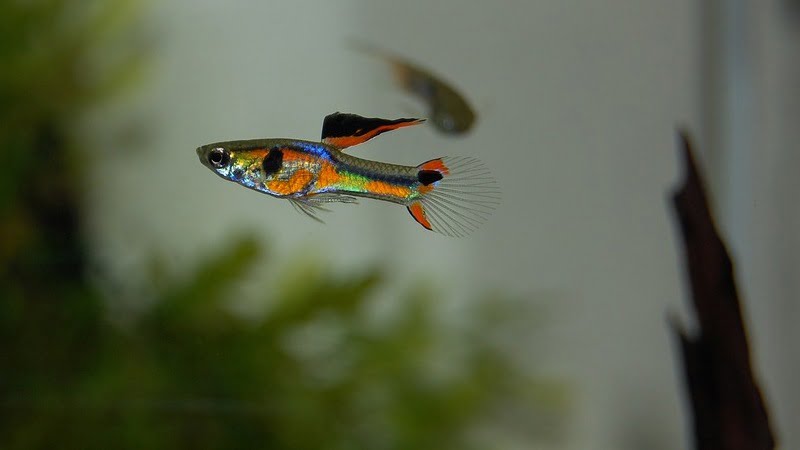 If you’re looking for a quick and affordable way to get your aquarium started, then guppy fish with Betta is the way to go. Guppy fish are small, peaceful, and easy to care for, making them the perfect beginner fish. Plus, they’re fun to watch and add a splash of color to your aquarium. Betta fish are also a good choice for beginners, as they’re relatively easy to care for and are very striking to look at.

How Are Guppy and Betta Different?

There are a few critical differences between guppies and bettas. While they are both members of the freshwater fish family, they have different preferences when it comes to habitat and diet. Guppies are also livebearers, meaning they give birth to live young, while bettas are egg-layers. Here is a more detailed look at the critical distinctions between these two popular fish.

A guppie is a small freshwater fish from the family Poeciliidae. People keep guppies as pets in aquariums. Guppy is the colloquial name of a species of fish coined by American ichthyologist Dr. Theodore Gill during the early 1800s as an informal way of referring to these fish among Harvard University students based on the apparent appearance of their eyes.

Guppies tend to live in shallow water pools within or at the margin of dense vegetation in warm climates.

Various species of guppies can reach lengths of between 2.5 centimeters (1 inch) and 9.4 centimeters (3.7 inches).

These intriguing critters can adapt to various habitats and are reasonably easy to care for. Betta fish are a great addition to any aquarium.

Keep in mind, though, that it will likely die after a few weeks of living in a tiny bowl. As a result, a tiny aquarium is not recommended for betta fish.

The ideal temperature for a Betta aquarium is 78 degrees Fahrenheit (25 degrees Celsius), as they are tropical fish.

Guppy Fish With Betta: Can They Coexist?

Some tank owners are reluctant to put other fish species with Betta fish, even if they are experienced.

Betta fish (also known as Siamese fighting ones) have been known for their fierceness and aggression around other fish.

Fortunately, Betta fish can be kept in the same aquarium as Guppies. In addition, their aggressive nature makes them a good match for the peaceful, calm guppy, so establishing a common ground between the two is not hard. You can’t go wrong with a pair of people that are complete opposites!

Introducing bettas to guppies is still a delicate process, though. Fish of both sexes, in specific proportions, can be lethal.

If you are thinking about getting fish as pets, two of the most common species that you can choose from are bettas and guppies. Although these two types of fish are relatively easy to take care of, they require specific tank conditions and habitats. This section will go over some of the things you need to know to provide a betta or guppy with a comfortable and safe home.

You’ll need a tank big enough to house both your Betta and a small group of guppies, for starters. Overcrowding your aquarium is a surefire method to stress your fish, increasing their vulnerability to illness and even death. A minimum of 10 gallons, ideally more, is a good starting point for the size of your aquarium’s tank.

One gallon of water is suggested for each fish in your aquarium. However, if you have guppies and a betta in the same tank, you’ll want to give them a little more area. As a result, a 10-gallon aquarium might comfortably accommodate a male betta and three guppies. Three extra guppies can be added for every five liters of water.

One male for every two females is ideal when purchasing guppies. Having more females than males is the greatest strategy for keeping male guppies from becoming overly attached to their mates, which can cause stress in the females.

Unlike guppies, which seldom jump, bettas can and will do so. To find food, a new area, or a partner, bettas will jump from puddle to puddle during the dry season to save water.

As a result, to prevent escape attempts, always use a tank with a lid or cover the top with fine-gauge wire.

The temperature And pH Of The Water

The heater should be placed near the pump so that the heat may be uniformly dispersed throughout the tank. Make sure you have a thermometer located at one end of your aquarium so that you can check to see whether the water temperature is consistent throughout.

As long as the pH of the water is maintained between 7.0 and 7.2, guppies are OK. For Betta fish to survive and remain healthy, they must have a pH level of 7.01. So, in that respect, the two species are compatible.

The water in a betta tank and a guppy tank should be free of ammonia, nitrite, and nitrate, with an ammonia level of no more than 20 parts per million, preferably less. You’ll need a pH-monitoring kit to keep track of your tank’s pH levels.

Fast-flowing currents in a Betta fish tank will not be a source of enjoyment, so choose a filter that can be set at a low flow rate.

By introducing species like Corydoras catfish and Amano shrimp to your aquarium, you can keep it looking clean and tidy. Bettas and guppies get along nicely with these creatures.

Keep your tank water free from nitrates and ammonia by completing a partial water change of around 25% every week.

Planting And Decorating The Tank

A well-planted aquarium with live plants, rocks, and substrate is ideal for guppies. You might want to choose a substrate that will showcase the colorful guppies and bettas while also highlighting your live plant collection.

Make sure you provide your fish with hiding places as well. Bettas usually hide away whenever they’re stressed, such as when they’ve just been moved into a new tank or when they’ve got new tankmates new to them. On the other hand, Guppies generally do not stay out in the open unless they are stressed or sick.

It’s best to keep the number of bettas in your guppies in check to provide a peaceful tank environment.

Keeping only one or two in a single tank is preferable because bettas have limited tolerance for each other.

Betta fish, by nature hunters, will nibble on the guppy’s fins, resulting in serious health problems for the animal. Keep many guppies and a restricted number of bettas for the optimum tank environment.

You may prevent your Betta from being obsessed with just one fish by keeping many different kinds of gophers.

The Right Combination of Betta and Guppies Gender

While most people want a betta that is either male or female, there are some who want both genders in their fish tank. This can be accomplished by getting the right combination of bettas and guppies. By following these tips, you can have a beautiful and thriving aquarium with a nice variety of fish.

You need to know that male bettas and male guppies make an awful combination in a tank. Actually, this is the worst combination for your guppies. The male guppy fish will typically be brightly colored.

You cannot keep male bettas with a bright fish or a fish with vibrant color. I know that this is not the ideal situation, but this is the reality you will have to face.

A betta male with a large tail was bred to compete with another betta with highly pigmented wings. The fish will attack if they see another fish of the same color. It doesn’t matter whether the other fish is of another species.

However, some male guppies and betta fish can get along quite well. Nevertheless, you will need a large tank and a large area to cover.

Male bettas and guppies may coexist, but you do not want to mix a female betta with a male guppy.

Female betta pets do have a less antagonistic nature. However, they resemble female guppies. When combined with a male guppy, the male will attempt to mate with the Betta. Your female Betta is not going to be pleased and will almost certainly fight back.

You can keep them together if you have a male betta and a female guppy. You might prefer doing this over using two male fish.

Basically, female guppy fish are not as colorful and vibrant as their male counterparts. The possibility of things going wrong exists with any pair, but they are less likely to do so with this pair. Female guppies and betta fishes are probably a good choice for the safest pairing. Betta females seem to be a bit more peaceful than their male counterparts. That means they’ll make good friends with other female aquarium fish.

How To Set Up The Ideal Tank For Guppies And Bettas

When it comes to setting up a freshwater fish tank, you need to take a few key things into account. You can choose among various options available, but it can be difficult to decide which is best for your new pet, guppies, or bettas. Here’s a quick guide on setting up the ideal tank for these beautiful creatures.

For all fish, the size of the tank is essential. The issue becomes more significant if different fish species are not 100% compatible in a tank. Bettas typically maintain territoriality. They dislike intrusion into their territory.

Guppies will have plenty of hiding places in a tank with many plants. The betta fish will also seek refuge in the aquarium’s planted areas when threatened. As a result, both fish will appreciate the aquarium’s presence of real plants.

Additionally, your guppies may nibble on aquatic vegetation. Therefore, pick plants that are not toxic to guppies.

The Correct Order To Feed Bettas And Guppies

Bettas and guppies have different nutritional requirements. Beetles are carnivores and need protein-rich food to survive. Guppies can consume betta food because they are omnivores. Yet they will not receive all of their nutritional needs from it.

It’s best to feed your guppies before your betta food to keep them from eating it. Bettas are not interested in guppy food, so they will not bother them. Spot feed your bettas when your guppies are full.

Video: Can Betta and Guppies Live Together

Does a female Betta attack a guppie?

Female bettas are aggressive, although not as aggressive as males. Additionally, female guppies are less likely to provoke female betta hostility.

What diseases affect bettas and guppies?

Why do bettas chase guppies?

Bettas are also notorious for being aggressive, and one typical behavior is chasing and nipping at other fish. Bettas are territorial, and they see the smaller guppies as a threat to their territory. In the wild, bettas eat small fish, so it’s instinctual for them to chase and nip.

When it comes to choosing freshwater fish for your home aquarium, you can’t go wrong with a guppy or a betta. These two species are not only beautiful but relatively easy to care for, making them an excellent choice for beginners.