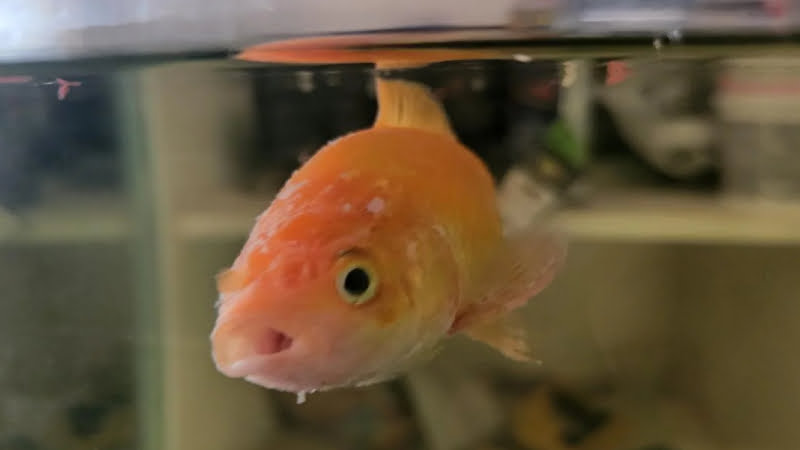 When you asked this question, I’m sure you had watched the same experiments on Youtube, right? If you don’t, feel free to check the video below. Honestly, the result is extremely surprising. You can see the goldfish was frozen in nitrogen liquid, but then it can move its body nearly immediately after being put in the water that is at room temperature.

Why did this happen?

This section will explain how the experiment is typically prepared.

First, you need to prepare a liquid nitrogen container, such as a bowl, and a goldfish tank. Due to the difference between the boiling point of liquid nitrogen and the room temperature, you can observe that the gas evaporates very rapidly and strongly.

Next, place the goldfish in liquid nitrogen for approximately three to five seconds, then return it immediately to room temperature water. When removed from liquid nitrogen, the fish will initially be ice-hard and extremely brittle, but it will resume normal swimming when returned to its natural habitat.

However, why? Before delving into the specifics, let’s define liquid nitrogen.

What Is Liquid Nitrogen?

LN2 is nitrogen that is in a liquid state at low temperatures. Let’s quickly review what nitrogen is. It is one of the most prevalent substances in the universe. The simplest way to demonstrate this is that your body contains approximately 3 percent nitrogen and that nitrogen makes up more than 70% of our atmosphere. Nitrogen is a nonmetal and the lightest member of group 15 of the periodic table, which is commonly referred to as the pnictogens.

The boiling point of liquid nitrogen is approximately 195.8 °C (320 °F; 77 K). It is manufactured by fractional distillation of liquid air. It is a colorless liquid with low viscosity that is commonly used as a coolant.

Liquid nitrogen is frigid enough to cause severe frostbite to live tissue upon contact. Inappropriate handling can result in frostbite or cryogenic effects. Because it boils so quickly, the phase transition from liquid to gas can rapidly generate a great deal of pressure (one-liter liquid evaporates 700 liters of gas).

Due to its capacity to produce extremely low temperatures, liquid nitrogen has many applications. Cryopreservation of biological samples, such as sperm, eggs, and animal genetic samples, is one of its applications.

As water expands when it freezes, freezing typically causes cell damage. Animal cells are surrounded by thin membranes. When ice crystals form, the cells are destroyed. This describes frostbite.

Whether or not an animal can survive freezing will depend significantly on how long it has been frozen. For example, you can safely place your hand in liquid nitrogen for a fraction of a second. A goldfish that has been frozen for a brief period of time may still be alive when it thaws. This is because the ice crystals did not have sufficient time to cause tissue damage and eventually kill the fish. However, if it were to be placed in a freezer, it would almost certainly perish relatively quickly.

There are animals that can survive temperatures below freezing because their blood contains “antifreeze” molecules (AFP) that prevent it from freezing. AFP will bind to ice crystals within the cell, preventing their growth, spread, and crystallization in order to protect the cell. Simultaneously, the cytoplasm becomes denser, making it more difficult to freeze. So, although an animal may be partially frozen, there are not enough ice crystals to kill it.

Time is the central factor here. If you immerse your hand in liquid nitrogen (for a few seconds), the Leidenfrost effect will manifest. This effect creates an insulating vapor layer that prevents the liquid from boiling rapidly, same for the case of a goldfish whose cells are not completely frozen but appear to be revived.

If the experiment is prolonged, the cells will completely coagulate, and the fish (as well as your hand) will suffer from severe frostbite and die.

Video: Look What Happened For The Goldfish In Nitrogen Liquid

Can you swim in liquid nitrogen?

No, you can’t. Due to the Leidenfrost effect, when a hand is placed in liquid nitrogen, a thin layer of insulation is produced. Due to this repulsive force, a droplet floats above the surface as opposed to making physical contact with it. However, keep in mind that the duration of this effect is extremely brief. If you jump into a pool of liquid nitrogen (which takes much longer than placing your hand in the liquid), you will immediately develop frostbite. The freezing of cells, fatty tissue, blood vessels, and other bodily fluids. Organs cease to circulate, and cells become damaged. I’m afraid you cannot return.

What happens if you submerge your hand in liquid nitrogen?

A rapid submersion in liquid nitrogen will cause your hand to feel frozen. However, because of the Leidenfrost effect, there would be no frostbite or harm to the body.

It boils at a temperature of -196 °C (320 °F), which means that any surface at room temperature will bead up and generate a layer of vapor behind it, just like when you drop water onto a heated surface.

You would be protected from freezing if you plunged your palm in liquid nitrogen because the vapor barrier would quickly form. However, this protective shield would only last for a short time.

What is the difference between dry nitrogen and liquid nitrogen?

Carbon dioxide molecules in dry ice are composed of a carbon atom covalently linked to two oxygen atoms. Furthermore, it undergoes sublimation at 78.5 °C and transforms into a gas.

Liquid nitrogen is elemental nitrogen in liquid conditions. It is composed of nitrogen molecules with two nitrogen atoms covalently bound to each other. In addition, at 195.79 °C, it undergoes vaporization and becomes a gas.