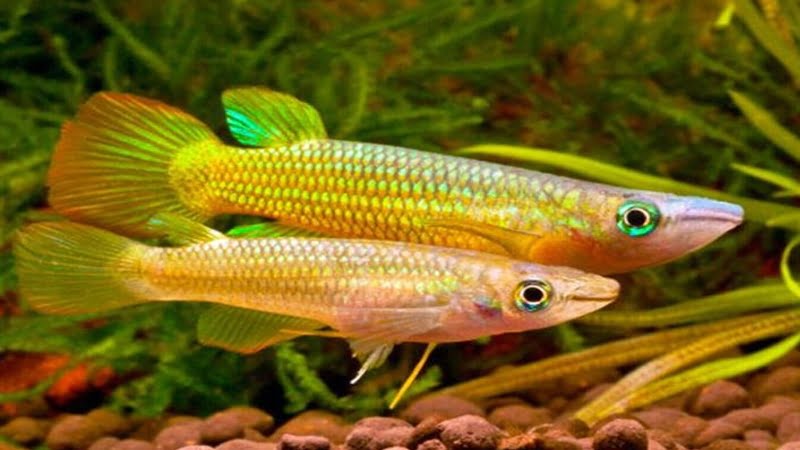 If that is the case, why not come here and seek an answer?

Golden Wonder Killifish is a native of Sri Lanka and India and can be found in streams, rivers, swamps, and paddy fields. They belong to Aplocheilidae family and have Aplocheilus lineatus as their scientific name. Though they used to only meet in Asia’s tropical environment, now they survive in all aquariums in any part of the world. Most of the killifish are found in habitats that have overhanging shrubs and trees, Golden Wonder Killifish included.

As an adult, the Golden Wonder Killifish can grow up to 4 inches long, or 10 centimeters long.

When kept in aquarium captivity, a fry can reach a good length of up to 3 inches (7.5 cm), which is excellent and average for fish purchases and can live for up to 4 years if given ideal care and surroundings.

In most circumstances, Golden Wonder Killifish social behavior is peaceful, shoaling, or schooling in small groups in the vicinity of one another. Unless they feel threatened, you won’t observe any aggregation behavior from them.

Attempting to jump out of the tank could result in their death if they are frightened by the situation. If that’s the case, you could want to give their tank a weighted lid.

Also, you’ll notice them swimming at the top of the tank, where they hunt for food. To demonstrate their predatory tendencies, when insects fall into the water and take hold of them, they suddenly grasp hold of the insects.

Males are usually bigger than females. The other distinguishing feature is color. A golden shine covers the Golden Wonder Killifish male’s body, which is why this species is known as a Killi. There is also a golden shine that appears on the females, but it is much less noticeable. The silver coloration on females is more subdued.

Golden Wonder Killifish: How To Breed Them

The first thing you should do is set up at least a 20-gallon tank. This will give your fish enough room to swim. It is better if it is bigger. Those fish are good jumpers, so they’ll spend most of their time at the top. People will not do that because you also have a tight-fighting lid.

A lot of live plants are recommended, too. Not only decorate your tank but you can also use them to improve water quality. You can also add a few rocks, driftwood, and caves so that you can hide and have more places to stay.

Golden Wonder Killifish can live in a wide range of water conditions, but it doesn’t mean you don’t have to be careful about them. You should keep the temperature between 72° and 77° F. Another thing to keep in mind is that you should keep water with a hardness of between 5 and 20dGH. The right pH is about 7.

To keep the water clean at all times, you need a high-quality filter, and you should change the aquarium water every two weeks to keep it clean.

Because these fish like slow-moving water, you can change the filtration system to meet their needs. Alternatively, you can add dense plants or rocks to act as a barrier.

You should also know that Golden Wonder Killifish are very sensitive to water conditions, so you should put them through an acclimation process and don’t try to get them used to the new water too quickly.

As compared to some other Killifish, Golden Wonders are more tolerant of water conditions that fluctuate frequently. As a result, it’s critical that you keep your aquarium water crystal clear.

It is recommended that you use a filter system that is appropriate for the size of your aquarium and perform 30 percent water changes at least twice weekly. Killifish love slow water flow, so tweak your filtration system or buffer it with tall, thick plants or rocky outcroppings.

Having bottom-feeding scavengers like Corydoras catfish in the community or vacuuming the substrate periodically is the best way to eliminate uneaten food from the tank.

As a peaceful species, Golden Wonder Killifish get along with the majority of their species. They also can coexist peacefully with cichlids like the Ram or other dwarf varieties and larger tetras, Banjo Catfishes, and most Corydoras Catfish. They may coexist quietly with snails and huge, gentle crustaceans like vampire shrimp. Small groups of Golden Wonder Killifish are the best way to keep them.

As with most predatory fish, the Golden Wonder Killifish will eat any animal that will fit in its mouth.

The Golden Wonder Killifish isn’t a fussy eater, so it may flourish on a wide diet of meaty items and remain vibrantly colored. A wide variety of high-quality flake, pellet, freeze-dried tubifex, and bloodworms will be accepted. Frozen meaty foods replicate their natural diet of insects and insect larvae that the fish take from the surface of the water are needed for carnivores like them, too.

Golden Wonder Killifish Eggs: What You Should Keep In Mind When Raising Healthy Fries

The first thing is collecting eggs by using a spawning mop. When the eggs hatch, the fry will have a secure place to seek shelter from their parents who will see them as a potential food source. It’s great if you have one. If don’t, you can make your own to simulate the job of plants in the wild, catching the eggs and offering some protection from the predatory parents until you can spot the laid eggs. The mops with the eggs and parents should then be separated.

Wool is a perfect material for a spawning mop. Not only good at catching eggs but also wool is soft for Killifish fries’ bodies and doesn’t cause any harm.

You can also use plants for catching eggs, but you should get plants that are large enough for fries to hide within.

Let’s move to the next stage, preparing water in a shallow container. Use water from a cycling aquarium tank and add aquarium salt to prevent your fries from diseases and other health issues. Aquarium salt also boosts immunity, stimulates slime coat production, and inhibits many infectious agents. Essential electrolytes can be lost during water changes. Therefore, adding low dosages during regular water changes may be beneficial for some fish. The recommended amount of aquarium salt is 1/2 tsp every gallon.

To minimize the likelihood of the eggs developing a fungus, it will be necessary to add an anti-fungal chemical to the water. When selecting an anti-fungal agent, be cautious. However well-known methylene blue is, it is extremely poisonous and can discolor anything it touches. After adding the antifungal of your choice, remove the spawning mops from the breeding tank and place them in this shallow container that is prepared earlier. This container will be used to incubate the eggs. Allowing the eggs to be exposed to air for a brief while will not hurt them as long as they remain moist.

Viable eggs will hatch into free-swimming fry in 10-14 days. Please keep in mind that you must separate them from their parents. If possible, it is ideal to keep the fry in a small container where they can quickly find their food. It is possible to feed the fry a diet of baby brine shrimp, micro worms, and vinegar eels. To make cleanup easier, the fry tank’s bottom should be bare. Male and female fish may be distinguished after two months, and immature fish are ready to breed after five months. They have a three-to-four-year life expectancy.

Breeding the Golden Wonder Killifish in a fish tank is thought to be easy, and their spawning process isn’t very different from that of other types of fish.

How many Golden Wonder Killifish should be kept together?

When compared to other fish, this species doesn’t always appear to be aggressive. They get triggered only when they feel threatened. Even though Golden Wonders aren’t a schooling species, you can keep them in groups of up to four individuals.