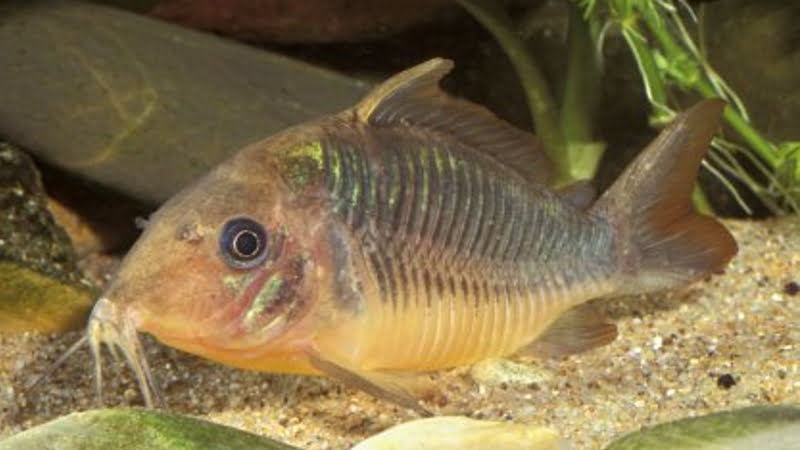 Having a stand-out appearance with a metallic green coloration and being easy to breed, no wonder why Emerald Catfish, also be described as Brochis splendens, become so popular with aquarists.

Not only that, if you’re looking for a Giant Cory Catfish, it’s a waste if you pass this one. The maximum length that has ever been recorded is 9.9 cm. They’re also peaceful and durable, so why not have a group of Emerald Catfish?

Are you beginning to have an interest in them? Good, this article will supply useful information for breeding them.

Overview Of This Giant Cory Catfish

Size: The mature fish can reach 7 – 8.4 cm in an aquarium environment, though some particular cases show that the large male can reach 9.9 cm in length and 40g in weight. The large female can reach 9 cm. Normally, the female grows bigger than the male.

Distribution & Habitat: They mostly live in South America, the Amazon River basin which includes Brazil, Peru, Ecuador, and Colombia in specific. That also means they are available in a wider range of places in their family than other species of catfish. One more fact, Emerald Catfish are freshwater fish. They inhabit sluggish waters with dense vegetation and occur in shallow muddy waters.

Lifespan: 13 years if kept in a well-cared aquarium.

Usually, when mature, females are larger than males, and their bellies are thicker when carrying eggs. In addition to that, females may also have a pinker belly while males have a yellower belly.

Emerald Green Cory are considered a friendly community fish, which can be kept with most other peaceful and not too large community fish. Small peaceful community fish such as livebearers, small Tetras, Danios, Rasboras, and dwarf cichlids are excellent tank mates. However, aggressive fishes are not recommended.

They enjoy the company of their own kind and are gregarious. Their sociability is so great that they need to be kept in schools of at least six individuals and prefer groups of ten or more. When left alone, they are shy, reserved, and easily frightened, which results in stress.

It isn’t a challenge to care for Emerald Catfish, but when you decide to have them in your aquarium, please note that you should keep the pond environment like their natural habitat, including these factors:

It’s better if you keep a group of Emerald Catfish that includes 6 or more individuals. A minimum tank size of 30 gallons with a near-neutral pH for a group of 6 fish is recommended. Unlike most Corydoras that require subdued lighting, this fish tends to be out during the day, so normal lighting is ideal. High light levels are accepted if plenty of shade is available.

Their natural habitat should be considered when decorating and arranging the aquarium. Well-planted tanks with twisted roots are ideal for these fish. Driftwood and caves can also be used as hiding places. The barbels of these fish are sensitive, so it is preferable to keep them in good condition with small, smooth gravel. Poorly maintained gravel can cause infections in these barbels. To maintain an oxygenated tank and clean substrate, this fish needs an under gravel filter.

In addition, they prefer water movement that is moderate. They tend to mostly swim at the bottom of the aquarium, and their barbels are prone to infection from a poorly kept substrate. So, using a vacuum hose to siphon the substrate is a good way to keep the gravel free of decomposing animal and plant matter.

One more important care tip is a weekly change of 10-20% of water to remove their waste and keep the environment clean.

Also, they are happiest if living in an environment with high oxygen levels. At low oxygen levels, these fish will swim to the top and gulp air before swimming back down.

Emerald Catfish are foraging omnivores and will accept most sinking dried foods and small live and frozen varieties such as chironomid larvae (bloodworm), Tubifex, etc.

They can also be fed a varied diet will ensure the fish are in optimum condition.

They should never be expected to survive on the leftovers of other aquarium inhabitants or to be relied upon to keep the aquarium clean.

In captivity, the female collects the eggs in her pelvic fin basket and lays them close to the water surface and are easy to remove elsewhere for raising. In detail, the female pastes them individually to plants and other objects. The two pairs reportedly produce about 900-1100 eggs. Another female spawned about 830 eggs.

Diseases That They Can Be Affected By

Parasites, bacteria, and fungi are the common cause for not only catfishes but also other aquarium fishes. These causes make catfish have difficulty in breathing, or develop cotton-like tufts on their skin, eyes, or mouth.

High nitrate levels can cause them to develop infected barbels; this makes it difficult for them to navigate and eat normally. So, maintaining the water change is the most important to keep them healthy.

Catfish such as Emerald Catfish can also have Red Blotch Disease. Symptoms include reddened skin, particularly on the belly. The sores are sometimes relatively clean, but they’re usually accompanied by dead white skin and nasty-looking blisters. This disease can take a long time to spread, and affected fish may exhibit symptoms of red blotch disease for weeks or even months before they eventually die.

What is the largest cory catfish?

Besides Emerald Catfish with a maximum length is 9.9cm, Banded Cory Catfish, or Scleromystax Barbatus as their scientific name, is also terrific with a 9.8 cm length, and become one of the largest cory catfish.

How many cory catfish should be in a tank?

Cory catfish is a social community, so a group with 6 or more individuals living together will be the best for them. Stress occurs when they are left alone and are shy, and easily frightened.