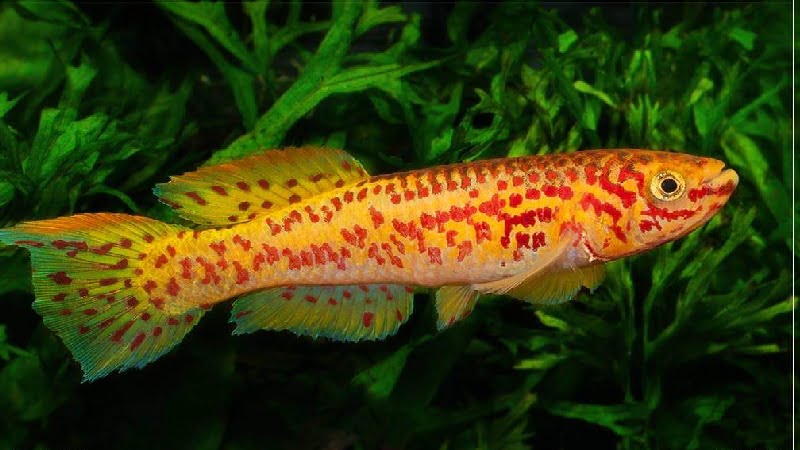 The Gardneri Killifish is a beautiful, peaceful fish that makes a great addition to any aquarium. They are easy to care for and can live peacefully with other fish, making them popular for beginners and experienced aquarists alike. However, there are a few things to consider before adding Gardneri Killifish to your tank. This article will discuss five of the best Gardneri Killifish tank mates that make you feel joyful.

Gardneri killifish is a species of freshwater fish in the family Cyprinodontidae. The species’ name derives from the Dutch word ‘killy,’ which means a ditch or canal. The name suggests that they can often be found in shallow waters, such as water holes, streams, and marshy areas. Generally speaking, killifish do not grow to incredible sizes since they are adapted to swimming in shallow waters.

They originally became available for sale on the aquatic market in 1913 and are a highly sought-after fish to this day. It’s unsurprising, given their brilliance in person. Consider the intricate patterns and colors, and you’ll see why they’ve been the headline attraction in many home aquariums for the last century.

They are small, typically less than 2 inches in length. They are brightly colored, with orange, red, yellow, and blue patterns on their bodies.

In the Cyprinidae family, dainos are schooling fish. Several danios types, such as the dangila and giant danios, reach a length of five inches. Generally, most species grow to less than two inches in length. In addition to being exceptionally hardy, Danios can withstand a wide range of temperatures and water chemistry, making them the perfect fish for beginners and newly set up aquariums.

Fishes of this species are often boisterous and active but rarely injure other fish. The selective breeding process has led to the development of a variety of colors and long-finned forms. The white cloud mountain minnow belongs to the danio group since it is a closely related fish that comes from the same region as the danios and requires similar aquarium requirements.

Danios are communal shoaling fish that are nonaggressive in character. Danios thrive in the company of small, peaceful fish such as minnows, tetras, swordtails, killifish, and guppies. The size of your Danio will determine this.

Barbs are a vivacious, sturdy, and vibrant species. However, it’s preferable to maintain them in groups of at least five or more because they’re all schooling fish, so keep that in mind while making your decision—the majority of people like well-aerated, somewhat chilled water with a soft acidic pH.

Due to the Barbs’ high level of activity, tank mates should be able to deal with their raucous natures. When maintaining a group of Barbs, it’s also necessary to consider the male-to-female ratio. Males will harass females during spawning, which is why keeping an appropriate male-to-female ratio is critical. If a guy pursues a single female, she will become anxious, resulting in health concerns.

The optimal male-to-female ratio is one male to every two females. This not only provides them with a reprieve from being pursued but also allows you to showcase your vividly colored males.

Tetras are Characidae schooling fish. They are serene, colorful, and mainly tranquil, making them excellent for both novice and experienced hobbyists. Red-eye, black skirt, serpae, and bloodfin tetras are popular starter tetras, although neons, black neons, glowlights, and lemon tetras are all viable options.

Others, including cardinals, emperors, and penguin tetras, are more difficult to care for and thrive in established tanks with softer, more acidic water. Certain tetras can also be found with selectively developed color variations and long-finned strains.

The albino cory cat or one of its relatives is one of the first bottom-feeding fish many aquarists purchase. Corydoras has over 170 recognized species, including 100+ that haven’t been named scientifically. Their range extends from the Andes Mountains to the Atlantic coastline and from northern Argentina to Trinidad in South America.

They are in the family Callichthyidae. This guide includes Brochis, Aspidoras, and other such species with smaller, overlapping ranges and similar aquarium needs. Each of the three genera is a peaceful bottom feeder that can be kept in community aquariums. They have pectoral and dorsal fins that are heavily armored and covered in sharp spines. Some species contain a mild toxin in their spines, so handling them should be taken with care.

Malaysia, Borneo, Sumatra, and Kalimantan are all home to the clown loach. Their breeding grounds are in rainforest regions where smooth, tea-colored water runs along sluggish streams during spawning seasons. Leafy plants and plant debris like fallen leaves, twigs, and branches are preferred by this species of loach.

The clown loach is a peaceful species that want to have partners with whom it may create a school. Almost any nonaggressive fish can be used as tankmates. It’s best to maintain four or more in a tank because they love to live in groups. They dislike intense light and prefer to hide amid plants or rocks, as well as sleep in holes, caves, and other hidden locations.

3 Advantages Of Having Tank Mates For The Killifish

Aquarium tank mates are an essential part of any fish colony, and for killifish, tank mates can be especially beneficial. Here are three benefits of having tank mates for the killifish in your aquarium:

It’s best to keep killies with other fish that school in the wild. That way, they can all stick together and feel more comfortable. There are also some benefits to having tank mates for your killifish. They can help keep the aquarium clean and provide entertainment for your fish.

When fish are in close proximity to one another, they tend to socialize and interact with each other more frequently. This interaction can take the form of play, aggression, or simply hanging out together.

The more social a fish is, the less likely it is to become stressed. Conversely, a stressed fish is more susceptible to disease and less likely to thrive in its environment.

How big can Gardneri killifish get?

Gardneri Killifish grow to a maximum size of 2.5 inches, so they are actually small fish. Their coloration and patterns make them stand out despite their small size.

Can killifish be with guppies?

While some species of killifish may coexist peacefully with guppies, others are utterly incompatible. If you must combine the two species, seek a smaller, less aggressive breed of killifish.

Can Gardneri killifish live with shrimp?

Yes, killifish and shrimp can coexist. You can effectively maintain shrimp and killifish together as long as you keep the proper sort of shrimp with the right kind of killifish. Killifish, on the other hand, may devour the shrimp’s fry.

What temperature do killifish live in?

Killifish normally requires water temperatures between 72 and 75oF, so an aquarium heater will suffice if you have just one tank. However, serious keepers who have a room full of tanks may rather heat the room as a whole.