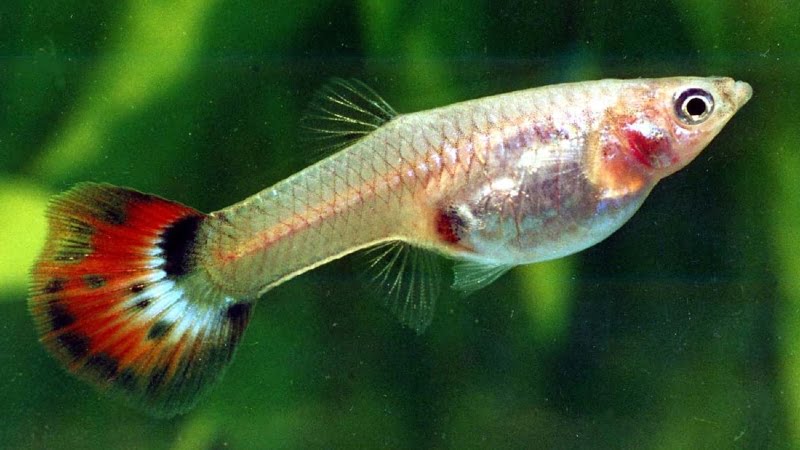 Do you know that female guppy fish are relatively less colorful than their male counterparts? Various minor details differentiate the female guppies from males. If you need advice on how to tell them apart, or if you want to know whether your female guppy is pregnant or if it’s actually a male with diseases, this post will solve every mystery. Check out my 5 tips on how to tell the gender of a guppy.

After many investigations, I can assure you that there is no better way to tell if a guppy is female or male than by looking at their physical aspects. The behavior can be misleading sometimes. But judging by the caudal fin or the colors always helps.

Like many aquarium fish species, female guppies are generally larger than males. An adult female guppy can grow up to 2.5 inches in length, while a male can only develop to as large as 1.5 inches. That’s is significantly smaller compared to the females’.

However, if you keep young fries in the same tank as the adult guppies, it can be complicated to distinguish the gender through the size. So I suggest you compare the length of the fish only when you keep the same generation of guppies in a single tank section.

Other than the size of the fish, you can compare the body shape of each member of the tank. Male guppies tend to have a slimmer body shape with no bulky underbelly. When they aren’t pregnant, female guppies still have slightly more visible bellies. And when they are carrying fries, they become incredibly bulky, and the bellies swell into a balloon shape.

Compared to male guppies, females’ tails look much more “dressed down”. They usually don’t have unique patterns to them. Color-wise, they can still have vibrant shades like turquoise or orange. But most of the time, females’ tails are monotone and significantly less majestic than males’. It’s understandable since males have to attract females with their beautiful tails and body color.

The tail patterns of males are very diverse. You can easily catch one with mosaic, leopard, or lace tail. The females usually don’t have tail patterns.

As for the shape of the tails, males are much flashier with wide caudal fins. Halfmoon, delta, fan, or veil are common tail shapes for males. Females own simple flag tails or round tails, and they are significantly smaller as well.

Male guppies are much more colorful than females. They come in different colors like yellow, turquoise, red, orange, or green. One single male guppy can have different abstract colors, for example, a mixture of turquoise and orange. It’s possible to encounter a mysterious black guppy as well, but the rarity of color can shoot the price of the fish up to the sky.

Furthermore, many male guppies have colorful metallic specks all over their bodies. If you encounter a turquoise guppy with silver and purple specks over its body, it’s definitely not a rare sight. Females, on the contrary, tend to come in silver color with silver metallic specs only. We can still encounter more colorful ones. But the beauty of the females lies mainly in the color of their tails.

Is My Female Guppy Pregnant?

If your aquarium includes both male and female guppies, they will constantly mate without even needing your involvement. A normal pregnancy for female guppies lasts a month, and each time they will give birth to around 20-50 guppies if they are young. More mature females can reproduce more.

How do we know if a female guppy is pregnant? Here are the signs:

Some female guppies are colorful, but compared to male guppies, they are significantly more toned down. If you want to get colorful guppy fish, it’s best to opt for male ones. If you wish to breed guppies with elaborate colors, it depends totally on the males’ colors. So you don’t have to think much when picking a female guppy except for its health.

Can you tell male from female guppies by color?

More or less, it’s possible. Male guppies have extremely elaborate colors and patterns. The caudal fins are more extended and flowier as well. When you have a tank full of guppy, the flashier ones are the males, and the simple silver-brown ones are the females. There are still exceptional cases where females have vibrant colors, but it’s rare.

Female guppies can get aggressive during pregnancy. And, they feed on young fries after giving birth if owners don’t provide enough food either. Nevertheless, they are still much more chill than the males. Males will even fight to the death for the chance to mate with a female guppy.

Do female guppies eat their fries?

If there aren’t enough hiding spots, food, and space, a mother guppy can feed on her own children. That’s why it’s important to separate the fries from their mother and generally from adult guppies.

Where can I buy female guppy fish?

There are many online and offline stores that sell guppy fish. You can check out local PetSmart stores or PetCo. Live Aquaria ships live fishes if you are interested. If you are considering buying at PetSmart, make sure that you go to a local store and check the quality carefully instead of letting the workers pick randomly.