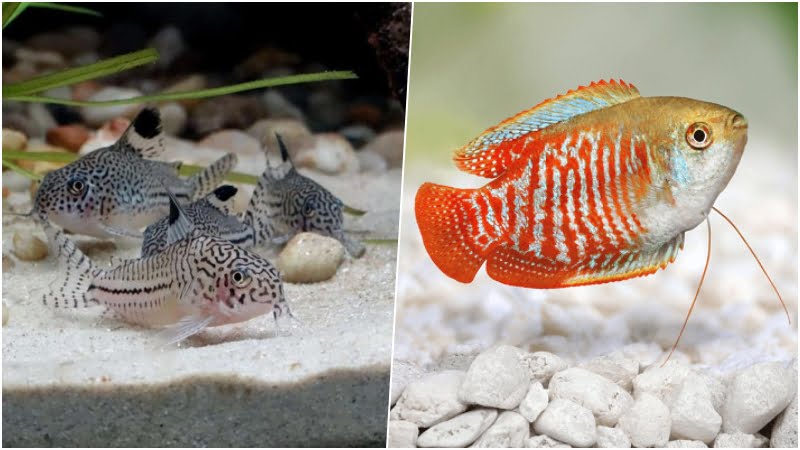 Dwarf gourami and cory catfish are both peaceful fish but pairing gourami with cory catfish needs more attention since the dwarf gourami can be both timid and slightly aggressive in nature.

To help you successfully keep dwarf gourami and cory catfish in the same community tank, this article will provide 7 important points for you to carefully consider.

Can Dwarf Gourami And Cory Catfish Live Together In A Community Tank?

Yes, they can live together. Some reasons that make them the suitable tankmate for each other include:

Cautions To Keep Dwarf Gourami And Cory Catfish Together

Some owners have noticed their dwarf gouramis attacked and nipped the cory catfish though they both have the peaceful temperament. This might be attributed to your fish having suffered from stress.

Here are some cautions that you need to look out for if you want your dwarf gourami and cory catfish to live in harmony.

Overstocking is a serious problem that can make your dwarf gourami get aggressive easily and cause the cory catfish to be terrified and inactive. This is because the gouramis do not have enough space in a crowded or too small tank, causing them to display bullying behavior toward the cory catfish for territory.

Therefore, you should consider the tank size and the number of cory catfish and dwarf gourami you want to keep. If you can get a suitable tank size for keeping these two species, you should think of other fish buddies.

As mentioned, tank size does matter, especially to serve the purpose of avoiding overcrowding situations. If you want to have a dwarf gourami and other cory catfish species, go for at least a 20-gallon tank.

However, it’s better to purchase a larger tank because cory catfish usually go in groups and they gonna need the room to zoom around and play. Moreover, the larger tank could prevent the dwarf gourami from attacking your cory catfish due to lacking swimming space.

Keep the water clean and other parameters stable

This is an imperative criterion for keeping both of them living healthily and actively.

Clean water with zero-level of ammonia and nitrite helps reduce the risk of fatal infections and increase their metabolism and lifespan. Moreover, the cory catfish are very sensitive to ammonia and nitrite, so keeping good water quality is always the priority.

Besides, maintaining the stability of other water parameters such as pH and temperatures is important. Too many sudden changes in water conditions often initiate stress to your fish, making their behavior change (causing aggression or being timider) and then cannot get along.

Cory catfish are schooling fish and they do well in a group of a minimum of 6. More is always better since they will be happier, enjoy discovering together, and feel safer. They are very social creatures, and you will notice a huge difference between having just a few of them and having a proper-sized school. If you keep less than the minimum number, they tend to be shy and mostly stick to their hiding places.

Provide hiding places in the tanks for cory catfish

Provide your tank with plenty of cover in the form of rock formations, driftwood, and caves. Cory catfish need a quiet place to rest and feed, as well as to hide whenever their gourami friends get nippy.

Stay away from other aggressive and bigger fish species

If you want to add more friends for your dwarf gourami and cory catfish, do not choose any bigger and more aggressive fish since these fish can make your cute gouramis and cories terrified. They can be bullied and easier to get stressed.

You can keep your dwarf gourami and cory catfish in the same aquarium with other species as long as they’re peaceful, not too big or too small, and can live in the same water conditions as theirs.

I’ve read many threads on the fish care forums and found out that the dwarf gourami often eats the sinking pallets for the cory catfish. The simple solution is that you can feed your cory catfish after the light is out in the evening.

The cory catfish are often active in the evening while their gourami friend prefers a good nap as soon as the lights go out. Therefore, they can enjoy their food after the gourami sleep.

If you think of building a fish tank with dwarf gourami and cory catfish, just go for it because these two species are compatible with each other. However, there are several critical things you should consider for the best harmonious living environment.

I hope that this article helps you in building a healthy and lively aquarium with your beautiful and favorite dwarf gourami and cory catfish.