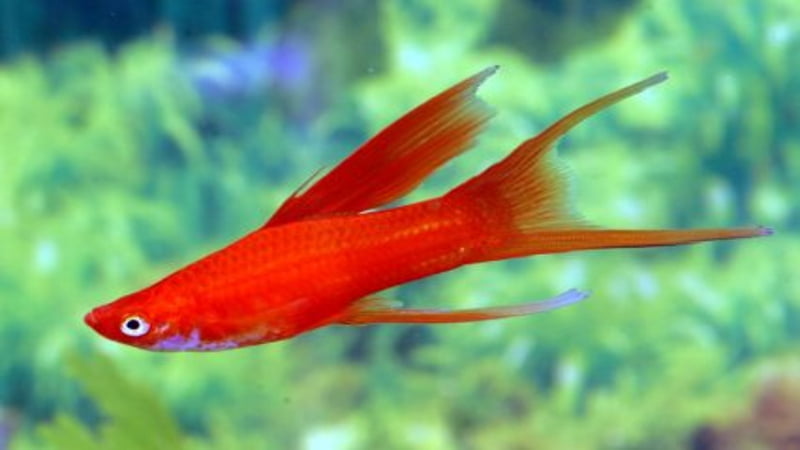 Double swordtail fish are popular options for freshwater aquariums. And if you are a beginner in taking care of these beautiful creatures, I have just the right guide for you. Learn about their appearance, requirements of living conditions, diets, and safety among swordtail tank mates. Every basic knowledge you need about double swordtail fish is here.

Despite differences in appearance, all types of male swordtails usually reach 5.5 inches in length when they hit adulthood. As for females, they are slightly bigger and can grow up to 7 inches. If you have a batch of adult double swordtail fish in the same tank and they were born at the same time, checking the size of the fish can help you differentiate more or less the males from females.

As for the lifespan of these colorful fish, it depends a lot on each individual’s living condition and health, but a healthy one usually lives up to 5 years. When a young swordtail lives past the fry phase and enters the juvenile stage, it is more likely to survive and live a proper lifespan. During the fry phase, swordtails are only 1/4 – 2 inches long, making them easy targets for bigger fish.

If you want to ensure the best lifespan for your double swordtail fish, keep the young from the adults in different tanks.

Double swordtail fish come in many different colors, but the red and orange ones indeed are the most common and easy to get. There are green, black, golden, neon, red tuxedo, green tuxedo, etc. swordtails as well.

There are many online stores where you can purchase colorful swordtails. Some of the platforms with the most secure shipping service are Aqua Imports, Liveaquaria, Coast Gem USA, The Consolidated Fish Farms Inc, etc.

Both male and female double swordtail fish have the same caudal fin design with elongated upper and underparts. This feature makes these babies special since, in normal swordtails, only the males have elongated tail fins.

Due to the same tail fin design, it’s hard for many beginner aquarists to tell the two genders apart. Here are 5 easy-to-remember tips that will help you identify them.

Female double swordtail fish carry babies in their womb, and the womb is somewhat visible. Typically, the gravid spot has a dark black color that highlights above the orange or white body of swordtails. But many times, the spot is not visible and is only slightly darker than the body color of a female swordtail when she isn’t pregnant.

As I have mentioned before, female swordtails are bigger than males. Males reach 6 inches in length max, while females can grow to 7 inches. This characteristic applies to this entire fish family.

Nevertheless, this is not an easy to perceive aspect, and I admit that it’s a bit difficult to compare the size of male and female double swordtail fish, especially when different generations live together in the same tank. I recommend comparing the size of the fish when all the tank mates are in the same development stage. For example, compare the size between adults only or fries only.

If there are males and females within the aquarium, male swordtails will follow or chase females in the hopes of breeding. Females don’t act the same when they are ready to mate.

Male swordtails can exhibit aggression. It is usually because they don’t have enough chances to breed due to a high number of male fellows in the same tank. If you notice the swordtails fighting, chances are there isn’t a balance male-to-female ratio within the tank.

If they’re pregnant or sick, female swordtails can become more hostile. However, they don’t strike out as viciously as males. Should your swordtails cease to be interested in food, swim in a weird and undecisive pattern, hide more often, or lie down in the water’s bottom, they are likely female and pregnant.

How To Care For Double Swordtail Fish

There are 5 things you need to pay attention to when taking care of double swordtail fish. They are:

pH Level Of The Water

The pH range for swordtail fish is 7.0 to 8.4, which means that they grow best in neutral and alkaline environments. Be sure to check the water’s pH each couple of days to prevent your water from becoming too acidic or alkaline.

Maintaining a safe ratio of males to females is recommended to reduce threats and aggression for other fish. It is recommended to have a ratio of 1:3 male to female. And the size of the tank also is critical. A 5 inches adult swordtail needs 10 gallons of water to thrive healthily and non-aggressively. So make sure that the tank is big enough.

Young double swordtail fish may have a hard time protecting themselves from adult fish if they don’t have enough hiding spots. In case you don’t know, a female swordtail can consume her fries right after giving birth. So having lots of greens at the bottom and middle of the tank will offer enough hiding space for the young or weak ones.

TThe swordtail fish are omnivores and can consume nearly every green found in the wild, especially duckweed or water lettuce. However, protein and vitamins are the things this specie requires to stay healthy and colorful. Daphina, brine shrimp, and larvae of mosquitos are among the most popular food choices for swordtails. You can purchase fresh or dried commercial ones. They aren’t picky.

The swordtail fish makes excellent tank mates for species of the same family, like platies, mollies, and guppies. The male swordtails tend to be hostile towards each other. So if the tank you have isn’t large, you should keep one male with three or two females in the same tank. Avoid keeping boisterous fishes with small swordtails because things tend to go badly for the swordtails.

Are all double swordtail fish males?

No. Even females have double-sword tails, which is very different from single-sword specie. In general, the male and female double swordtail fish have the same caudal fin design.

How can you tell if a double sword swordtail is male or female?

Can double swordtails kill each other?

Yes, and in most cases, the killing happens between males or between females and young fries. That’s why it’s essential to keep a safe male-to-female ratio and separate the tanks for adults only and fries only.