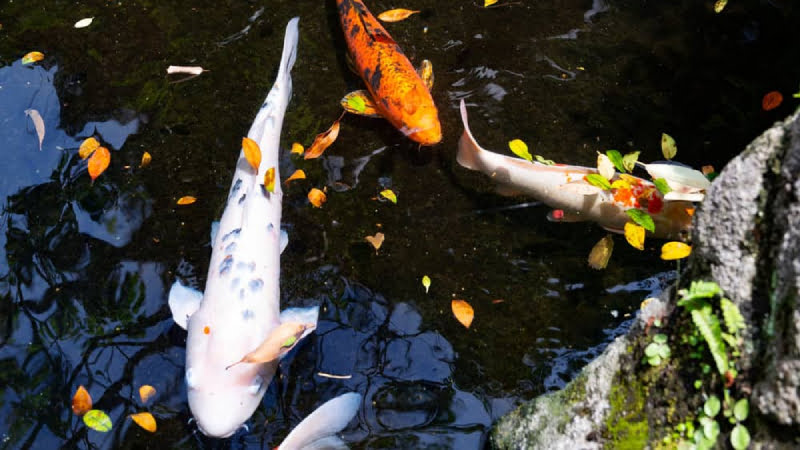 With their lovely colors and mesmerizing swimming patterns, Koi appear stunning and magnificent, but underneath their exterior splendor are many mysteries. One of these mysteries is “Do koi fish sleep?”

If you watched the outside of a Koi fish, you would think that it was constantly awake with its eyes wide open all the time. Humans generally indicate that they are sleeping by closing their eyes, whereas the koi are masters of subterfuge—almost nothing can reveal to them that they are sleeping. Nevertheless, like most living things, koi need sleep for proper rest and recovery from any health issues they may have.

You may be confused now, right? So, keep reading on to find out the answer and learn more about how koi fish sleep.

Koi, as with all living things, also require rest in order to ensure that they will recover. The Koi fish does not sleep as people do. Instead, they float in a comfortable place for short periods of time, during which they rest in a relaxed and safe manner.

Before the koi can rest in the pond, they must determine which area of the pond is comfortable for them to rest in so they can stay safe from predators such as raccoons or herons. In most cases, this happens in the center or at the bottom of the pond. It is also at the bottom of the pond where the water is the coldest. As koi’s metabolism slows down when they’re in cool water, they are less likely to become hungry. Thus, it helps them rest. The koi fish also hibernate in this manner during the winter months.

When the fish have found the ideal spot to rest in the pond, they will float in it for a while. Even though it may appear that they do not move, closer examination reveals that their fins are making small movements and that they hover in place.

The Differences Between Mammals And Fish

Since Koi carp are not mammals, they do not have the same concept of sleep as we do. In fish like koi, for example, the higher levels of brain functions are not present at the same level as in mammals. They do not and cannot experience the same type of sleep that we do, and they do not seem to experience dreams.

The other difference between koi sleep and human sleep is that koi do not close their eyes when they sleep. Koi are unable to do this because their eyelids are not present.

In conclusion, fish experts debate whether the resting and rejuvenating process of fish like koi carp can genuinely be called sleep, or whether it is simply deep rest and time for the fish to recover itself. As far as we can tell, koi go through cycles of minimal activity every day, during which it is fair to say they are if not asleep, at least resting deeply.

Where To Spot A Sleeping Koi Fish

It is most likely that you will find a sleeping Koi fish at the bottom or in the middle of the koi pond for a variety of reasons. First and foremost, I think we need to address the issue of predators, including raccoons, herons, hawks, owls, and even snakes. For animals such as this, koi fish would certainly be considered to be a quality source of food. As a result of this, koi fish tend to gather in groups since safety in numbers is better than individual safety.

In addition, it is also essential for these fish to float in oxygen-rich waters, which are more abundant at a depth further below the surface of the water. The dark is not a necessary or desirable condition for koi carp, as they can just as easily find a shady spot in the pond to rest under the cover of darkness.

When they are floating in one place, koi fish sleep upright with their eyes open. In general, they tend to be busier or to put it more simply, more active during the daylight hours.

You should be very careful if you have the chance to observe a Koi fish that appears motionless on its side. If they are dead or seriously ill, it is possible that they are lethargic due to poor pond health or water quality, or even worse, because of an insufficient amount of oxygen available to them.

The quality and temperature of the water in a pond can have a profound and decisive role in determining the health and well-being of every species of fish present. It is essential to take proper care of the koi and to provide clean water for them. Failing to do so may result in stressed koi or dead or sick fish caused by harmful bacteria. Therefore, it is a general rule that you should never keep pond water parameters located under direct sunlight in order to prevent unhealthy algae growth as a rule.

It has been known that this species of carp is susceptible to a disease known as Carp Adema Virus, also known as “Koi Sleepy Disease””. As a result of this infectious illness, symptoms include extreme lethargy, sunken eyes, swollen gills, loss of appetite, and difficulty breathing, and death can sometimes occur as a result of it. This illness is spread from fish to fish by mucus secretions produced by the mouth and nose of fish infected with this virus. Affected fish usually show symptoms within two weeks of infection.

The treatment for this problem involves removing all affected fish from the pond, quarantining them, and treating them with antibiotics until they are able to recover. It is important to understand that this situation is not the same as a Koi fish that is motionless and resting upright since this condition is much more dangerous.

If the temperature of the pond is below 50 degrees Fahrenheit, koi will not eat. During this period, their breathing rates tend to decrease, so those who are not familiar with their winter behavior patterns can sometimes be led to believe that they are dead fish. Due to the fact that Koi fish are cold-blooded creatures, warm water is necessary to increase their metabolic rate, increase their body temperature, as well as stimulate their appetite. This is because their bodies are very much affected by the temperature of the water that they live in.

During the cold winter months, temperatures are cold enough to cause a process of semi-hibernation, which is known as torpor. While enduring the cold snap, pond fish retreat to the bottom, safely away from predators. Through this sort of hibernation period, koi will remain relatively motionless, apart from moving ever so slightly in order to prevent their joints from becoming frozen.

In addition to the fact that their activity level becomes significantly reduced during the winter months, their immune system also becomes significantly reduced as well. After the pond temperature has increased again, koi fish become more susceptible to bacteria that can cause illness or even death as a result of this sudden increase in temperature.

Video About How Koi Fish Sleep

How long do Koi fish sleep for?

Koi fish might not be considered to sleep in the same way as humans do. It is just their resting period. You won’t see any koi fish dreaming on the bottom of the pond for eight hours, as they will not settle for a nap. The time spent sleeping by these apes resembles a period of intense rest, during which the body is naturally replenished.
When koi come to rest, they usually do so in the latter part of the evening and early in the morning.

Do Koi fish sleep on their sides?

In fact, we know that koi do not sleep, but rather float around in a comfortable area and rest. Thus, no, they do not sleep on the side of their bodies.
It is possible for a Koi to be sick if it appears to be asleep on its side. It could be an indication of several different types of illnesses.

Are Koi fish active at night if not sleeping?

It is true that koi are active at night. In the middle of the night, when humans are sleeping in bed for the night, koi are still active. They may rest, as described above, but they are never inactive.

The koi fish indeed do “sleep”, but in a way that is more similar to our idea of “resting” than sleeping. In order to determine whether or not your fish are sleeping, you will need to learn and become familiar with this sleep style. You have to observe their body language and appearance to realize if they are in a healthy state of inactivity or if they are in distress with an illness or bacterial infection.