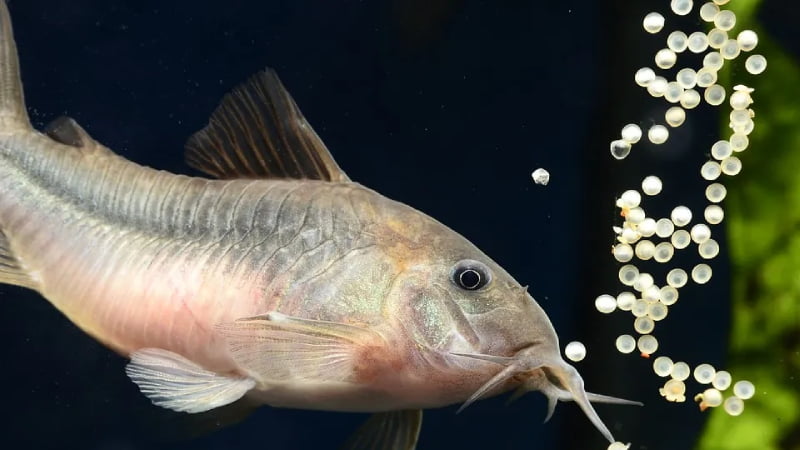 Obviously, fish can breathe in the water. We all know about that. But some kinds of fish have the ability to breathe both in water and air. Will the Cory catfish have that ability as well?

We sometimes see cory catfish swim to the top and gulp air with their mouths. Are they breathing? Do cory catfish breathe air?

Let’s find out the answer in this article.

Corydoras can breathe in both water and air. In the fish tank at home, you will probably see them rushing to the surface to breathe and then diving quickly to the bottom.

Unlike most fish, they have a thick outer skin that makes it more difficult to breathe. That’s why they use a technique of aerial respiration where oxygen levels are low under the surface. It is a natural and necessary process to maintain their oxygen levels.

In the wild, this is how they survive in low-oxygen waters. In the aquarium tank, we rarely see them floating to the water’s surface to breathe unless the quality of the water worsens.

How Do Cory Catfish Breathe The Air From The Surface?

After cory catfish gulp oxygen from the surface, they ensure that it passes through their bloodstream using their posterior intestine. Their mouths are used to swallow air, and their gut lining absorbs it.

Furthermore, they are also able to excess extra air by pushing it out through their vents. Without this ability, they would find it difficult to survive in low oxygen areas.

Why Are My Cory Catfish Gasping For Air?

First of all, I was hoping you could pay attention to how often they are doing this. If it happens less than 45 times in an hour, then it’s quite normal. This is a situation that natural cory catfish are accustomed to in a natural setting where the surface of the water is shallow and the oxygen levels are low.

As your fish tank is a new ecosystem for them, they are quite likely to continue this practice even if the oxygen levels in the tank are ideal. There are a few possible reasons why cory catfish are often seen coming up for air:

Do I need an air pump for cory catfish?

Normally, cory catfish do not need an air pump. However, if you want to reduce the number of times they have to swim to the surface for air, an air pump can be bought for a low price. Aerating the tank with air stones can also be beneficial as it allows more air bubbles to form in the tank. The cory catfish may also enjoy them and maybe play around near them.
An air pump is present to increase oxygen levels. Including plants in your aquarium can also help, as well as having a larger aquarium to minimize the cory catfish from having to come up for air. Your tank may be deficient in oxygen if the action occurs multiple times per minute.

Why are my cory catfish gasping at the surface constantly?

You can sometimes see the Cory catfish dart to the surface to gulp air. This behavior is normal, but constantly gasping at the surface may indicate low oxygen levels or water quality problems. You should check your tank conditions.

Is my cory catfish swimming up to the surface for digestion?

You may have noticed that after cory catfish eat their meals, they usually sink to the bottom of the tank, and then they quickly dart up to the surface for some air. This behavior could be regarded as quirky or even concerning.
While scientific evidence doesn’t support the idea that swimming up for air during or after eating can actually aid their digestion, it is something many cory catfish keepers have noticed.