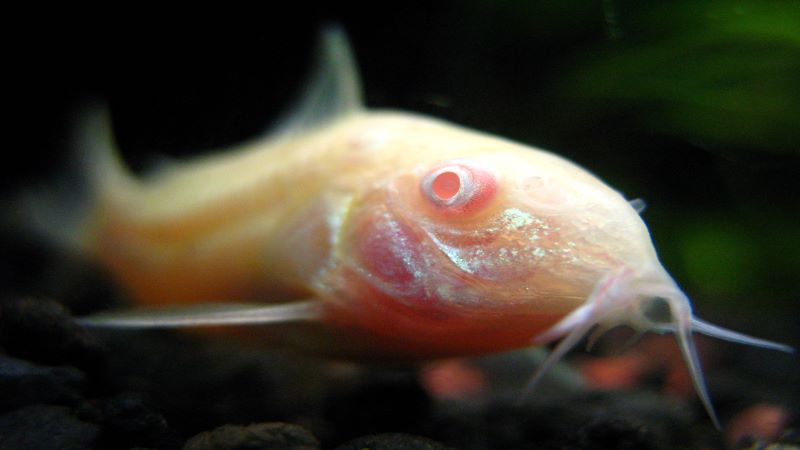 Cory catfish, a type of freshwater fish that is easy to care for in-home aquariums, are also less hardy than other types of fish. This fish type is sensitive to changes in variables like water quality and temperature and may develop Cory catfish red gills – a problem that often foreshadows other issues. It’s important to know the three primary reasons this symptom occurs so you can treat the underlying issues and save your fish!

This red gills symptom is often caused by three main factors below and can be fatal if left untreated. Fortunately, you can do a few things to treat this disease and keep your fish healthy.

A High Level Of Ammonia

You most likely have a high level of ammonia in your fish tank. Keeping the tank clean and monitoring the pH balance will keep things like this from happening.

You will see ammonia, nitrate, and nitrite levels rise without regular tank maintenance. The fish can suffer a number of negative effects from these levels rising.

It is common for the gills of the cory catfish to become quite inflamed when the ammonia level gets too high. Having red gills implies that the fish’s skin and gills are being burned by ammonia.

Also, cory catfish can be poisoned and killed by elevated levels of nitrites. The effects of high nitrate levels can be more devastating for some types of cory catfish than others.

Due to these factors, you should keep close track of water parameters. Conduct regular pH balance tests to ensure the water is in balance. This will enable you to catch fluctuations early before they become too serious. Fish tank owners who want their fish to stay healthy should be proactive.

Some fans believe that crimson gills are just an indication that the fish is sick. It’s possible that the fish aren’t obtaining the nutrition they need to keep healthy.

Do you feed the fish on a regular basis? If you’ve been feeding the cory catfish incorrectly, discoloration near the gills may develop.

It’s worth investigating what you’re feeding the fish. Cory catfish aren’t picky eaters, but you should offer them high-quality items to provide them with the nutrition they require to thrive.

The majority of people feed sinking nutrition pellets to their catfish every day. Various types of algae rounds, fish flakes, freeze-dried bloodworms, and vegetables, such as zucchini, are included in the diet of the fish.

It might be worth changing your cory catfish’s diet if you haven’t been providing it with a varied diet. Alternatively, you might be feeding the fish too rarely.

Feeding your cory catfish twice a day is the best approach when caring for them. It is recommended that you provide the fish twice each day and give them as much food as they can consume within three minutes.

As long as that works for your schedule, you can feed the fish once a day. The amount of food you give them should be what they can eat in five minutes if you only feed them once daily.

Infection on the cory catfish’s gills might be due to parasites. It can cause the gills to appear red depending on what is wrong with them.

I think you are dealing with ammonia issues more than parasites, but it would be wise to consider this possibility. It may be necessary to look for other symptoms and signs that indicate an infection in your fish.

Whether a fish has red gills or not, it is usually caused by poor water conditions. When fish live in dirty water, they are more likely to become infected with parasites.

Your water has probably been stagnant if you haven’t changed it. Skipping water changes can negatively affect the fish’s health if you haven’t been changing the water.

Make sure you keep the fish tank as clean as possible to prevent problems such as this. The fish will remain healthy under your care if they are kept clean.

How To Cure The Red Gills Of Cory Catfish

A water change immediately lowers the ammonia in aquarium water, which is the first step in treatment. You should test the water using an ammonia test kit to determine how much ammonia has been lowered. The following steps should be taken:

Within three to five days, you will usually see evidence of effective antibacterial treatment. If the fish are not eating normally, treatment should be continued until they are healthy, at which point they should be returned to the main tank.

Video: Why does my fish have red gills?

Are cory catfish sensitive to ammonia?

Cory catfish are also particularly sensitive to ammonia, nitrites, and nitrates. Ammonia and nitrite are among the most toxic, and they can kill in no time.

What does it mean if gills are bright red?

Your fish tank can become contaminated with ammonia due to high levels. Tanks that are newly set up often experience this problem, as well as when too many new fish are introduced at the same time.

After suffering ammonia burns, fish generally recover well and can be reintroduced to the aquarium within a week if they do not suffer severe bacterial infections.

There are a few reasons your Cory Catfish might have red gills. It could be a sign of a high ammonia level, an infection, or something more serious. If you notice your fish’s gills are red, take a closer look at their environment and see if there are any changes you can make to help them feel more comfortable. If this issue persists, it’s best to take them to a vet for a check-up.