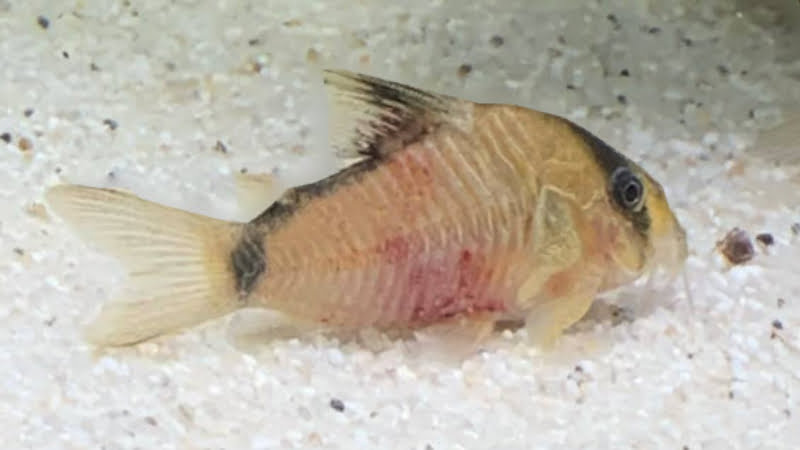 Cory catfish are excellent pets for the home aquarium. In your communal tank, you’ll discover that these fish are among the most friendly and peaceful.

Therefore, it’s probable that you’ll want to do all you can to keep these fish alive. In general, cory catfish are thought of as being a hardy species. Certain health problems, however, may be harmful to this fish. In the event that you observe that your fish has a red underbelly, it is reasonable for you to be concerned.

Cory catfish red belly occurs because of what? Do you think this may be an indication of a more severe medical condition?

To find out what causes the cory catfish have red belly, read on. In addition to this, you will get knowledge on the steps that may be taken to assist the fish in this circumstance.

The Disease That Causes Cory Catfish To Have A Red Belly

In most cases, when you notice your cory catfish have red spots on their belly, they are getting a disease called red blotch.

This is a disease quite common among cory catfish. Symptoms of this disease include red and bloody sores on the fish bellies.

The wounds on the belly could be free of dirt and debris, but they might also be oozing with blood. The sores will often have dead skin that is white in color, and this will give the impression that they are blisters.

Because this sickness has the potential to kill the fish, you need to treat the situation very seriously. When fish get infected with red blotch disease, the symptoms may not become apparent for weeks or even months.

The infection will keep progressing, and it is possible that it could ultimately be fatal for the fish. These red sores won’t simply occur on the belly, though; they’ll spread throughout the body.

It is not unusual for bleeding sores to appear in other locations on the body. When affected by this illness, your fish may have an appearance that is somewhat disheveled.

Fin rot may affect any fish, while red blotch disease seems to affect exclusively bottom-dwelling species. According to one theory, red blotch illness is brought on by the fish spending too much time resting on the substrate.

Of course, there are a number of factors that might increase the likelihood of a fish developing red blotch. Poor water quality, for example, will have a significant impact.

If you haven’t been keeping a careful check on the water’s pH balance, then the parameters may be out of control at times. It’s important to note that too basic or too acidic water can become problematic for your fish.

Keeping fish in unclean water or failing to keep an eye on the water temperature can all lead to problems. Your fish will be badly impacted by a variety of water quality concerns.

Your fish may go into shock if there are significant changes in the pH or temperature of their environment. This will increase the likelihood that they may get the disease.

If you want to keep the bacteria from coming back, there are many things you may do. The greatest thing you can do is to keep the cories’ skin in good condition at all times.

Make adjustments to your substrate so that it is safer for your corydoras fish, such as switching to sand or fine gravel. Avoid sharp things that might harm your corydoras’ skin.

Avoid using thicker or more porous substrates since your fish’s whiskers might become stuck, torn off, or ground down if they are mechanically injured. Remove any unnecessary or obtrusive features. Plants and driftwood are gentle on the skin, so use a much of them.

The Corydoras catfish is extreme sensitivity to nitrate levels. When nitrate levels are too high, bacteria might attach them to the damaged skin. So, keep nitrate levels below 20ppm, with an optimal target of 10ppm. It’s easier in a bigger tank, but even with 10-gallon tanks, you’ll struggle. Nitrites and ammonia are both zero.

In addition to adding a natural look to your aquarium, plants may assist in alleviating stress in your corals and lower nitrate levels.

Red blotch may be caused by a variety of water quality issues, including high ammonia levels, nitrates, or just too warm water. So constantly keep an eye on the quality of your tank water.

Make sure that you choose an airstone bubbler that will add extra oxygen to the water, as well as a filter that will remove any additional waste that could harbor bacteria.

What causes my catfish to be red?

Infections may take some time to spread, and fish that have been infected with red blotch disease may continue to show signs of the condition for many weeks or even months before they ultimately die. Red blotch disease and other opportunistic illnesses, such as fin rot and fungus, are quite comparable to one another and, to some extent, are brought on by the same factors. Just like I mentioned above, red belly in cory catfish can be caused by bacteria or poor water quality.

What can be done to treat red blotches?

There is currently no treatment available for the red blotch illness. The sole method of control that can be used is to remove infected plants from vineyards and replace them with ones that have been tested and shown to be free of viruses.

What causes the red blotch to spread?

The red blotch disease may easily spread over an area or vineyard if diseased plants are planted or if contaminated rootstock is used for grafting. Even though it does not normally spread from one plant to another within the same vineyard, there is still a chance that it may do so if the roots of the plant graft with one another underground.