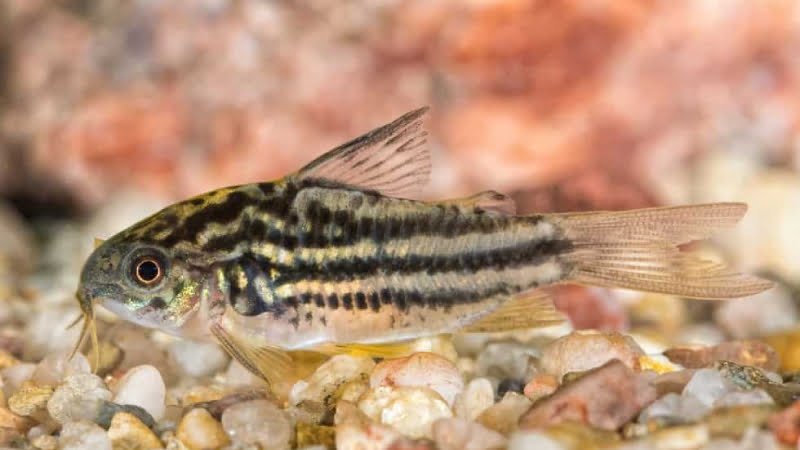 In general, cory catfish are relatively hardy, great fish that will be easy for beginners to take care of.

Due to their omnivorous nature, these fish do not have fussy eating habits. You shouldn’t have too much trouble getting them to eat in general.

This is why it’s strange when the fish aren’t eating normally. It could indicate that something is wrong if a catfish isn’t eating.

Read on to discover some the reasons why cory catfish might stop eating. It will help you figure out what is going on with your situation, which will help you deal with this.

13 Possible Reasons Why Is Your Cory Catfish Not Eating

It takes a bit of time for fish to get used to a new tank in most cases. If you just purchased the cory catfish, they might still not feel comfortable in the aquarium tank yet.

A cory catfish is well known for its shy behavior when introduced to a new aquarium for the first few days. It might take some time for the fish to adjust to the new environment before they are able to behave normally.

In most cases, after two or three days, the cory catfish will start to get better. The fish may not feel comfortable consuming food until around a week has passed.

They can survive without food for up to a week if necessary. Therefore, you should not panic too much and simply hope that the fish will soon adjust to the new environment.

There is also a need to note that taking the time to acclimate the fish properly in the early days will make them feel more comfortable in the long run. It is best if the bag is floated on top of the tank for a while and added tank water slowly to it before placing the fish in the tank so that they can get used to things quicker.

2. Affected By Aggressive Tankmates Or Bullying

Some tankmates can become too hyperactive or bully around your cories, disturbing their peaceful coexistence. There are even cases where bettas, tetras, and even guppies can harass your cory catfish and cause it to retreat, hide, or just lay motionless without the desire to eat.

If you want your aquarium to function properly, it would be wise to double-check all of the fish’s compatibility. If some of the fish are not compatible, you will have to separate them from the others and place them in a separate tank to ensure their safety. Also, make sure the tank has enough space for all fish.

Cory catfish may feel uncomfortable if there are not enough of these fish in the aquarium. Cory catfish can also get very lonely if they are kept alone.

4. Eating Through The Night

Despite not being nocturnal, cory catfish are active at night. They may choose to eat after everyone else in the tank has finished eating for the day. Throughout the night, you will probably notice lots of cory catfish hunting and sifting through the substrate while taking some 5-10 minute naps.

You can try feeding your cory catfish just before turning off the lights for the night. Instead of forcing them to eat at the same time as their tankmates, you could let them feast throughout the night so they could get the most out of their food.

5. Scavenging The Substrate And Already Full

During the time you are not around, your catfish will find scraps in the substrate that they can eat. However, once your catfish notices that you are around, they stop hunting. Cories who aren’t as outgoing as others might display this behavior. They may prefer to scavenge the substrate at night when the lights are off.

Corydoras prefer sand or smooth substrates. Their gills enable them to expel sand and ingest nutrients they find while sucking in the sand.

It is common for cory catfish to eat their own eggs. You may not notice the eggs and before you know it, they’ve been eaten. Eggs are quite nourishing and filling. It is very likely that, once they get used to it, they may prefer eating eggs more than what you are offering them.

The best thing you can do is remove the eggs as soon as you see them so that this habit does not get in the way of regular and controlled feedings.

7. Too Many Plants Or Decorations

If there are too many plants or decorations getting in the way of the cory catfish, they will be annoyed. They are very moody at the bottom of the tank, and it could be a sign that they want you to change the scenery of the tank. Give them more space and make it easier for them to hunt unobstructed and more comfortably.

You should avoid cramming too many fish into a small fish tank, which will adversely affect them. When placed in a crowded tank, many types of fish will become stressed and stop eating.

Beginners to the hobby often have this issue with the cory cats because they are good community tank fish. They often mistakenly put too many fish in a small aquarium.

Be sure to take into account the amount of space each species needs. As you plan your community tank, keep in mind that you will need enough space for at least six cory catfish and any tank mates that you intend to add.

Don’t overcrowd the tank. Only add as many fish as they can comfortably fit. I think it would be better to get a second aquarium or to acquire a bigger tank than to overcrowd your existing aquarium.

If you have a problem with your marine life, one of the first things any professional asks you is whether or not the water parameters are correct. When you think your cory catfish are not eating enough, you can perform larger water changes up to 50% weekly.

The Cory catfish is extremely sensitive to ammonia, nitrate, and nitrite levels. Cory catfish can even be suddenly killed by nitrite poisoning.

Nitrites and ammonia levels must be kept at 0 ppm, while nitrates can hover between 5-10 ppm. Your cory catfish could be stressed because of poor water quality, so they aren’t eating as much.

Sickness, of course, can cause the fish to stop eating. If a fish is infected with certain types of diseases, you will notice that it appears sluggish and that it is losing its appetite.

Monitoring your fish regularly will allow you to notice any symptoms as soon as they appear. Cory catfish can suffer from many different types of diseases and infections that can cause them to stop eating.

In order to figure out what is wrong with the fish, you may need to pay close attention to it. If you want to get an accurate diagnosis in a timely manner, you can also enlist the help of an exotic veterinarian.

The fish should be treated as soon as possible, and the tank should be checked to see if anything there had led to the fish becoming ill. If you catch the problem quickly enough, you should be able to identify the right treatment options, and the fish will be able to eat again.

11. The Cory Catfish Simply Doesn’t Enjoy The Type Of Food

12. Water Temperature Is Too Warm

We offer a temperature range of 72-80°F, but try to keep it on the cool side. For example, pepper cory catfish cannot tolerate warmer waters, while sterbai can tolerate higher temperatures. As a result of the warmer water, not enough oxygen is being provided, and therefore, the water could be causing stress, which can lead to the refusal of food.

Cory catfish can be stressed by any loud sounds, speakers, or vibrations. The fish may stop eating until the noise stops. In order to prevent these sensitive fish from going on a hunger strike, you should replace noisy filters and prevent vibrations from affecting them.

Video About How to Care for Corydoras Catfish

Is it normal for Cory catfish to be still?

The Corydoras Catfish is an active and curious bottom dweller, scavenging the bottom of the tank for food to eat. They can be very active during the daytime, but they can also spend quite a bit of time peacefully resting motionless.

What do cory catfish eat in a tank?

In nature, the cory catfish feed on insects, larvae, and worms, while captive cory catfish will eat pellets, algae rounds, and other pellets and tablets. A typical diet for a Cory catfish consists of algae pellets, shrimp pellets, fish flakes, worms, and anything else that fits into its mouth.

How much and how often should Cory be fed?

The amount of food your Cory will be able to consume in five minutes is just how much you should give them. It is ideal for feeding them once a day, or at the most, twice a day. They would spend the rest hours scavenging for food and getting food for themselves.

There should be a way to get your fish to eat normally again. All you need to do is determine what the problem is.

Putting in the effort will allow you to solve the problem and get things back to normal. Hopefully, your cory catfish will do just fine, and you’ll be able to take better care of them in the future.