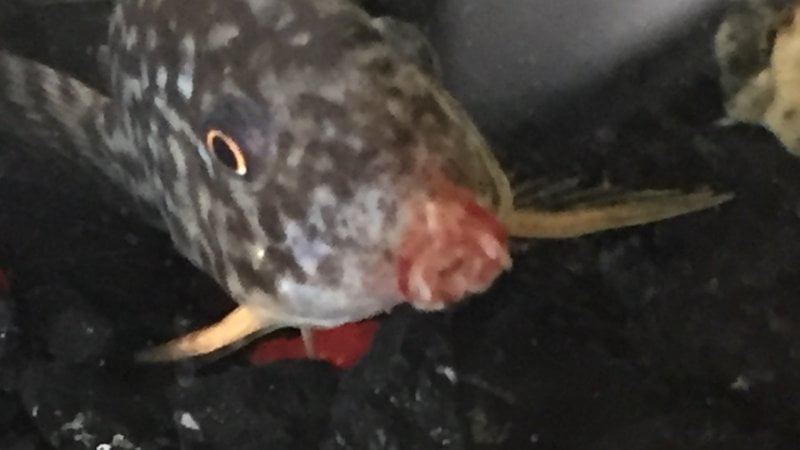 A few days ago, I witnessed cory catfish mouth rot for the first time, and I succeeded in curing this fungus-based condition after only about a few days (3-4 days). The rot wasn’t severe like in some cases where the entire mouth of the fish is infected. I got to cure it when only a patch on top of the fish’s upper lip had problems. I will tell you the symptoms of cory catfish mouth rot and how I cured it.

Mouth rot or cottonmouth is quite a widespread problem that aquarium fishes suffer. The condition is the consequence of mouth fungus, a bacterial infection caused by a bacteria called Flavobacterium columnare.

Most columnaris infections are caused by an external source and manifest as grayish or white spots on the head, around the fins, or gills. This is the clearest sign of mouth rot, and a bigger spot indicates that the fish has been going through hell for a few days or even a week already.

However, cory catfish catch this disease mostly when their immunity system is weakened, which originates from various reasons like competition for food, mating, overpopulation, bullies, stress, low oxygen in water, incompatible tank mates, etc. The water hardness also affects the possibility of infection since columnaris survive longer in 50ppm water.

Columnaris exist in all environments, and freshwater fishes are more exposed to suffering rots because of this bacteria. However, it doesn’t always attack the fish. Only when the living conditions and health of the fishes are lowered will the bacteria be able to sneak into the fins, gills, mouths, or wounds.

Follow these 5 steps, and you should be able to cure the mouth rot condition shortly, the same way I did with my cory catfish mouth rot.

#1. Treat With Salt On Early Stage Of Mouth Rot

If you notice a small cotton rot patch on your cory catfish, which has occupied the entire mouth in the form of a cotton ball, it’s possible to try to treat it with salt.

Requirement: All you need is 1 to 2 tablespoons of Sodium Chloride in a 10-gallon tank to disinfect the fish softly. Leave the fish in this saltwater for 1 to 2 days should be enough to remove the bacteria. If the rot spot is more severe, you can add more salt using the tablespoon measurement, but never put more than 4 spoons if you want to avoid irritating the fish.

Do we simply pour the salt into the tank, and that’s all?

No, it’s essential to remove a part of the tank water. For example, we are working with a 10-gallon tank. We have to dissolve 1-2 tablespoons of salt in clean dechlorinated water separately in a bowl. Pour the mixture into the tank with 1/3 or half of the old tank water. It’s essential to prevent the fish from getting into shock due to drastic water changes.

Leave the fish in this saline water for up to 48 hours to remove the bacteria from all infected body parts. In the end, we have to perform another water change.

The 2 “pesticides” that I recommend are Paraguard and Kanaplex. These are chemical medications that your cory catfish mouth rot needs. Evidently, this method is recommendable for severe cases of cottonmouth.

In the case of ParaGuard, for every 10 gallons of water, we use 1 capful of ParaGuard. ParaGuard can also be used for dips, but if a fish is infected, it doesn’t matter if they are given a dip treatment if we are going to put it in the same tank with the same water conditions and parameters.

As for Kanaplex, we use 2 spoons of medication with each 10-gallon of water. We can repeat the dose every day, but the total doses shouldn’t be over 3.

We have to remove the water filter that filtrates chemicals with both types of medications. Leaving the equipment in the tank while the medications work will only lower their performance. Also, it’s essential to carry out water changes. We have to change the water before each new dose.

This requirement has been repeating itself throughout this article. Every aquarist will agree with me that treating a fish with rot spots while not changing the water is just a way of killing the fish slowly. Before anything, performing a water change will allow the fish to relieve its stress and handle the bacteria treatment better.

Nitrofurazone, cephalexin, erythromycin, penicillin, etc., are some antibiotics that exist in powder form. They are perfect for mixing in tank water. Aquarists have been using antibiotics to boost animal growth and prevent disease outbreaks. In other words, I recommend adding antibiotics into the tank after we finish the removal of bacteria. This is a prevention step, not a fixing step.

#5. Quarantine The Sick Fish In A Separate Tank

Flavobacterium columnare spreads quickly and wildly. If you want to avoid affecting other tank mates heavily, it’s wise to quarantine the cory catfish with mouth rot in a different tank and treat it. Keep in mind that this bacteria already exist in the original tank, and it requires the use of pesticide and water changes as well. Treating both tanks at the same time is recommendable in this case.

How do you treat bacterial infection in cory catfish?

At an early stage, using 1-2 tablespoons/ 10 gallons of water can cleanse the gills, fins, and mouths of the fish from bacteria. Performing sustainable water changes and adding antibiotics like nitrofurazone, cephalexin powder, or erythromycin are some powder options for aquariums.

Can cory catfish be treated with salt?

Yes, cory catfish with infections or parasites can be treated with salt. Unlike the false myth that cory catfish don’t have scales, this breed is covered in scutes, ensuring that their skin won’t be burnt due to salt. However, a low amount is recommended (1-2 tablespoons per 10 gallons of water), and we should strictly use Sodium Chloride.

How do you treat Corydora fin rot?

Salt, antibiotics, parasite control products, etc., are some necessary ingredients that help treat corydoras fin rot. You can check out Paraguard and Kanaplex if the rotting spots are in a severe state.

Video: How to identify and treat FISH MOUTH ROT