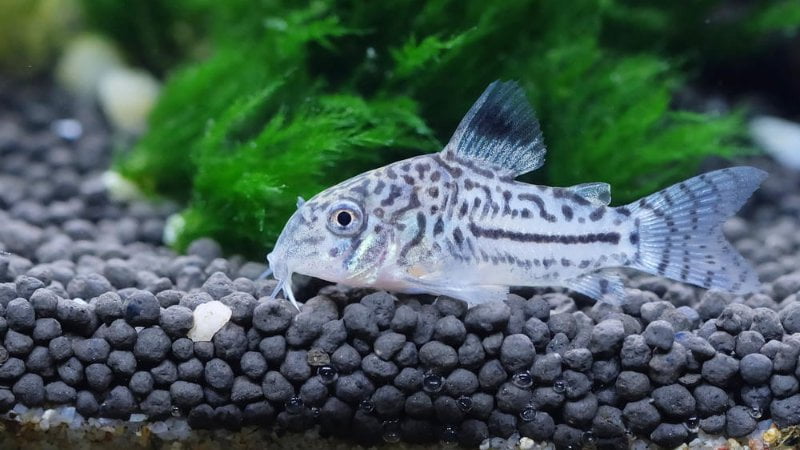 Corydoras are known as cory catfish, which has the feature called “cory catfish hiding”. It sounds so weird and special, right? Let’s find out!

There is peace and harmony to be found in Corydoras and it is an easy fish to keep in an aquarium.

Corydoras tend to hide initially when they are new to a tank due to their fear of unknown environments.

If Corydoras feel threatened or intimidated, they might hide in the corner of the tank when among a group of people. Corydoras tend to be timid, and for the most part, they spend their days hiding at the base of the tank.

The fish prefer hiding behind plants and substrates in order to avoid being observed.

It is for this very reason that they love to place live plants in their tanks and various decorations around the tank.

Furthermore, the traits that I am going to list below are some of the reasons why cory catfish live in hiding.

Corydoras have a reputation for being rather timid and shy. In the tanks, the most common activity is resting and hiding at the base of the tank.

On the other hand, you are likely to see them shoal in the evenings and at night.

The Corydoras that are found at the top of the tank are either attracted to oxygen or in search of food.

The fish in the community tanks don’t mix with them. It is much more common for them to remain separate.

Cydoras are able to ingest oxygen through the lining of their intestinal tracts. In water that contains low levels of oxygen, this behavior serves as a mechanism for increasing oxygen uptake.

This is true both in the presence of good conditions and in the absence of them.

Aquatic aquarium fish of this species do not have any aggression in them. Neither of them poses any threat to other tank members, nor do they attack other members of the tank.

Despite the fact that it will live peacefully in the same aquarium, Corydoras won’t obstruct the activities of the other peaceful members.

However, should there be any threat, they will huddle together and hide.

Corydoras will live comfortably with peaceful members in the same tank without interfering in their activities. However, they will hide once they feel threatened.

The Appearance Of Corydoras

Corydoras are characterized by their small bodies which lend them a distinctive appearance. It is easy to distinguish Corydoras from other species based on the features they possess.

In spite of nearly all favorable conditions, it is only possible for them to grow to a maximum height of 2.5 to 4 inches.

It is possible for them to grow to as small as just one inch in size. Three barbels are located on the face of the Corydoras.

It is believed that these barbels can detect food present in the sand by using their sensitive nature.

In addition to the adorable factor, they have quite large eyes, which can be regarded as an adaptive trait.

By having such wide eyes, they are able to keep track of the situation around them.

The main color categories of corydoras are red, green and blue. In some cases, they can be thickly colored so that they can blend into the sediments of the rivers. Others can be pale and seem to shimmer in the sunlight.

As a result of its flat underside and short face, this fish has a distinctive appearance. As the pectoral fins of their bodies stick out, they give the impression that they are armored.

Two types of dorsal fins are found in the Corydoras species. Many marine fishes carry their dorsal fins in a sail-like manner, whereas others present more rounded fins.

Forked tail fins also add considerable length to the body as a result.

A good thing about keeping a Cory Catfish is its ease of care. Corys have a calm, peaceful temperament and their temperament is not aggressive or aggressive at all.

Depending on the type of Cory Catfish you get, you may be more shy or timid.

What is the sleep pattern of the cory catfish?

There is no mistaking that these fish sleep: their metabolic performance slows down and their reaction times go down, but that does not mean that they are asleep completely.

Instead, they are not waking up from their sleep but are getting the rest they need.

Why do cory catfish swim so erratically?

Whether it is stress, dissatisfaction with their environment, or both, your Cory Catfish may be swimming erratically at times.

If this behavior persists, there may be a number of possible causes, such as poor water quality, poor tank conditions, improper feeding, or tank mates.

Corydoras are adorable fish that can fit into any aquarium because the fish’s attractive shape makes them adaptable.

They are also ideal for keeping in a community aquarium since they are easy to maintain.

In addition, some of their behaviors can be interpreted as signs of their moods.

A Corydoras is more likely to spend its time at the tank’s bottom, hiding underneath live plants or other decorations.

If the fish feel uncomfortable or if they are threatened in the tank, they will keep hiding in the darkness.