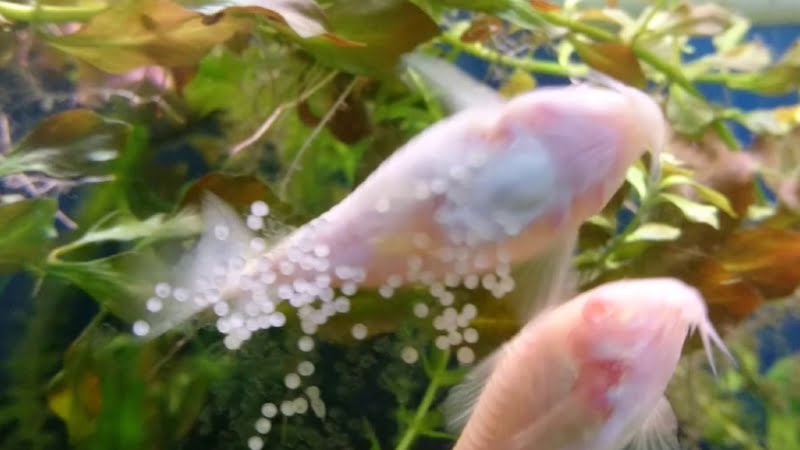 For aquarists, a major problem that kills the unhatched eggs is Cory Catfish Eggs Fungus (there are many species of fungus such as Saprolegnia, Achlya, and Fusarium). Not only do cory catfish hobbyists have to deal with this complex but also most aquarium breeders. So, preventing the affection of fungus is the first stage of raising our tiny newborn fries.

The common species of fungus are Saprolegnia, Achlya, and Fusarium, which attach to corydoras fish eggs and kill them before they hatch. The easiest food source is the egg yolk, so the fungus burrows through the shell to get to the yolk. As a result, the eggs will be destroyed completely.

By regularly cleaning the eggs and fanning the eggs to ensure adequate water flow, fish prevent fungus from establishing itself on the surface of their eggs. But for other fish, such as Corydoras catfish, the eggs are not cared for by the parents. That’s why you must handle this before all eggs are destroyed.

The 7.0 – 8.0 pH alkaline environment, which is preferred by most corydoras, is also an ideal condition for fungus to develop. You can’t change the natural pH level for corydoras because they may die, but this problem can be treated with chemicals.

Poor quality water with lots of organic water, unremoved wastes, high levels of ammonia, and low oxygen levels is the second cause of the fungus.

If your tank does not have an adequate amount of airflow (or lacks aeration), it can result in poor oxygenation and rapid buildup of harmful gasses. It leads to the eggs being easily affected by fungus.

Another reason why they may get fungus is if they are not fertilized. Therefore, you should make sure the corydoras eggs are fertilized.

Cory Catfish Eggs Fungus: How To Prevent And Treat Efficiently?

First, collect the eggs as gently as possible, remove the catfish parents, and treat the water with Methylene Blue. You can use Hydrogen Peroxide instead if Methylene Blue isn’t available. These efficiently protect Corydoras and their egg from fungal or bacterial infections.

Then, use an airstone to keep the water moving slightly. Whenever possible, it is best to move dead eggs away from living ones. If a dead egg creates a foul environment around it, remove it immediately. Even worse, if you don’t do this, the dead eggs caused by a fungus can spread to good eggs so fast.

Third and also important is keeping the water always at its best status. Change the water regularly by draining 25-50% and wiping away algae buildup. Remember, don’t do it dramatically because corydoras and their eggs are sensitive to changes. Plants consume nitrates to help prevent eggs from fungus, so adding live plants to your tank will help keep nitrate levels down.

Alder cones are also helpful in preventing fungus. The cones will slowly release tannic acid, which can slightly lower the pH level in soft water aquariums into the aquarium water.

The fungus can be prevented from growing on corydoras eggs by using API fungus cures before hatching. It has received many good reviews from worldwide customers.

Special Notes For The Treatments Of Cory Catfish Eggs Fungus

Hydrogen Peroxide can be used. Just stop dosing when the eggs hatch. The same with Methylene Blue.

I see some people add RCS Shrimp to help keep the tank clean besides water cycling, but there is a risk because these shrimps can damage the healthy eggs.

By lowering the pH levels, alder cones are beneficial, but please bear in mind to remove them before the eggs hatch. The young fry will take shelter in them and get stuck.

Cory catfish are freshwater fish, so no need for aquarium salt while you have Hydrogen Peroxide and Methylene Blue to treat eggs that are affected by fungus. Aquarium salt is needed only if your mature fish have diseases, and don’t forget that even mature cory catfish are sensitive to salt.

What do you do when your cory catfish lays eggs?

It is often best to breed cory catfish in a tank of their own or prepare to remove all other fish from the tank they spawn in, as it can lay eggs anywhere.
If you observe a cory catfish laying eggs, separate it from the eggs in another tank. Touching eggs by bare hand is difficult and rarely works and could have caused the fungus to grow.
When raising young in the main tank, the bigger problem is finding and feeding them, and this is always easier in a smaller bare-bottomed tank.  Live foods like “chopped” black worms, micro worms and baby brine shrimp are less polluting for fries.

Fertile eggs look beige in color, and they develop a dark spot in the middle as they get closer to hatching. The fry will most likely hatch successfully if the eggs do not develop fungus. An infertile egg is white, translucent, or has a plain appearance.

How long does it take for corydoras catfish eggs to hatch?

Depending on the temperature and species, the eggs hatch in three to five days. The tiny wrigglers (with yolk sac attached) can be observed on the aquarium bottom.