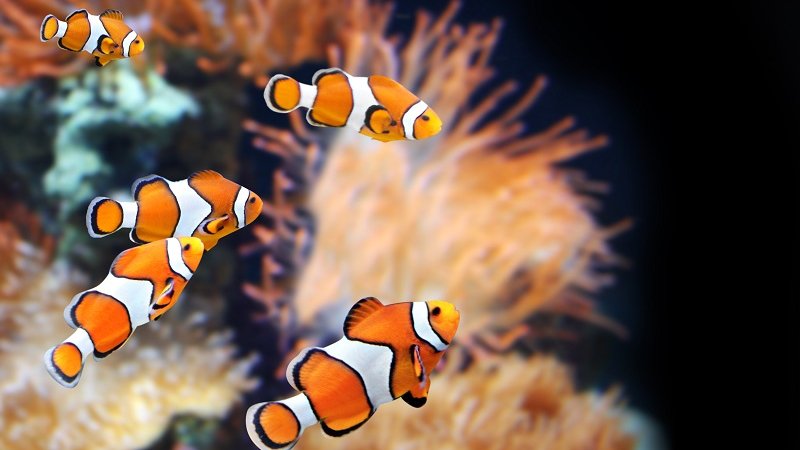 Temperature is considered to be one of the most important environmental factors for aquatic environments as it affects the growth, reproduction and distribution,… of aquatic organisms, including clownfish.

In this blog, I will discuss in depth what is ideal clownfish water temperature, what affect it and how to achieve that range even during winter and summer. I will answer also the question that many of you often wonder “Can clownfish live in cold water?“

What Is the Ideal Clownfish Water Temperature?

Clownfish are known to be easy fish to rear. They can survive in a variety of water conditions. However, you should need to keep their parameters within the appropriate range if you want them to thrive well. One of the critical parameters is the water temperature. Clownfish thrive when living in waters with temperatures ranging from 75 degrees F to 80 degrees F.

You do not need to keep the water at any particular, fixed temperature because the water in the wild where clownfish live does not maintain at any specific temperature. You just need to ensure the water temperature is within the acceptable range.

The temperature of water in the wild is always fluctuating, often due to weather factors, and clownfish can survive well. And so, many believe that they can also survive with fluctuating temperatures in the aquarium.

This is why it is crucial for you to know your clownfish’s temperature requirements and ensure that you keep the parameters within the prescribed range.

Can Clownfish Live In Cold Water?

Yes, of course. Clownfish can thrive in water that ranges between 23.89 to 28.89 degrees Celsius (75 and 80 degrees Fahrenheit). The temperature of your tank doesn’t matter, as long as it is regulated to within this range by a pool heater/cooler. Clownfish are colorful, cute creatures that inhabit tropical reefs around the world. Clownfish, being hardy fish, can be safely kept in the home aquarium.

The clownfish, like “Nemo,” is usually 2-8cm in length. Clownfish form an unusual symbiotic relationship with sea anemones in the wild. If other fish come too close to the anemone, they may get stung and killed. But clownfish are immune to the poison in the tentacles. They will feed on leftovers from their host, as well as bring it food. It is advisable to keep at least two clownfish together because they are social fish that thrive on companionship.

There are several Clownfish farms around Australia, which is the best option for those who want to purchase a pair of these fish. Captive-bred animals seldom have parasites or other harmful diseases and can be easy-going when it comes to food.

What Could Affect Your Clownfish Tank Temperature?

There are many factors that cause the temperature in the tank to fluctuate, one of which is:

These same problems can also occur in case you place the aquarium near a radiator or vent.

I suggest placing the aquarium next to a wall where there aren’t any windows. And also avoid the attic because the temperature there is also easily affected by the weather outside.

Artificial light and water temperature also have a connection. For example, incandescent bulbs produce enough heat to increase the temperature in small tanks. Therefore, we must understand the effect of light on temperature in order to make the necessary adjustments to compensate for the presence of their illumination mechanisms.

Changing the water in your aquarium can affect the temperature. The larger the change, the more dramatic the impact. To avoid temperature fluctuations, test your water before pouring inside your tank. Ensure that the temperature is within the required range

It is difficult to account for this issue. Sometimes, the temperature in your tank fluctuates because your equipment is faulty.

When the temperature in your tank fluctuates, it’s sometimes because there is a problem with one of your equipment components such as a thermostat or a heater. Your thermostat may be not showing the right temperature. Also, your heater might refuse to generate the heat it was programmed to deliver.

So, you should not be subjective that only rely on the device to determine the temperature. Observe the clownfish’s behavior, if their habitat is inappropriate, their behavior will be strange.

How Do You Keep Your Clownfish Tank Cool In The Summer?

One of the most challenging things to keep track of as an aquarist when summer arrives is water temperature. Ensure that your tank doesn’t overheat by following these tips:

This sounds odd, but it works. Place the clownfish tank in a cool location. You can do this by adding an air conditioner unit to ensure that the room temperature is always at a suitable level.

You should also close the curtains. Don’t forget to position the tank away from the window. That’s what I explained above.

One way to keep the water cool during the summer is by using effective filtration. A proper filtration system prevents the water from reaching a higher surface temperature for extended periods of time and allows it to be consistently mixed, which diffuses residual heat throughout the entire tank.

If you believe the temperature in the tank is rising faster than your countermeasures can handle. Take advantage of ice by taking frozen water bottles and adding them to the tank. This will definitely lower the temperature inside the tank.

You can also attach frozen bottles to the tank from the outside. That will keep the water temperature from dropping too much. Either way, make sure you measure the water so it’s not too cold.

Hot water reduces oxygen levels, increasing the metabolism of clownfish. They will eat more food and generate more waste. Therefore, you should feed them less than usual to combat the accumulation of waste. However, we are not starving clownfish either. Limit feeding prevents excessive waste while ensuring the health of your fish.

During this period you should also change the water more frequently so that the clownfish does not have to endure the stress caused by both the heat and the discomfort caused by the dirty water.

5. Keep Lighting to the Minimum

Light will generate more heat. If you are trying to reduce the temperature in the tank, you need to turn off all the lights of the aquarium. But that doesn’t mean you don’t provide any light for the aquarium. Give your clownfish the number of hours of light they get in their natural habitat. That would be about ten hours a day. However, if the water temperature is being high, the number of hours can be flexible, only 8 hours a day, for example.

What should be the water temperature for clownfish in Celsius?

The water temperature should be set to around 26 degrees Celsius so that it mimics the sea.

Can clownfish live in 30 degrees?

Why is the wrong temperature bad for your clownfish?

Clownfish do not like fluctuations in temperature. If the water gets too warm, it can stress clownfish, worse, damage their immune systems and expose them to all sorts of diseases. If the situation is not rectified, your clownfish will eventually die.

If the temperature is too low, they will become weaker, slower and more sluggish. In this case, the end result is also death.

Are clownfish tropical or cold water ?

Known for its orange-and-white coloration and affinity for hiding in sea anemone clusters, the Ocellaris clownfish is a small tropical fish. It’s a good thing that clown fish are generally quite hardy and easy to take care of compared to many other tropical fish!

The ideal water temperature for clownfish is between 75 and 80 degrees Fahrenheit. But remember, excessive fluctuations can harm your clownfish, even if the average temperature is in that range.

I hope you find my article informative and know how to keep an ideal water environment for your clownfish.