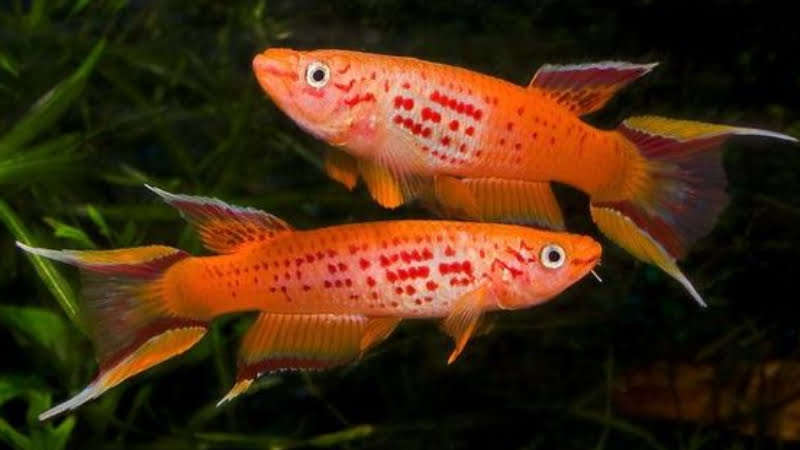 It has been more than a century since the Chocolate Lyretail Killifish became well-known in the aquarium hobby. In addition to other well-known species such as Fundulopanchax Gardneri, Aplocheilus Lineatus, and Aphyosemion striatum, this species is quite popular. Due to the ease with which this species may be kept and bred, many experienced Killie keepers (Killinuts) would recommend that a novice Killie keeper begin with this species. It is an ideal beginner’s fish.

As a consequence of the German merchant ship Waganda’s trip to Port Gentil in Gabon, in 1928 the African species was collected by Öser . These fish were imported alive into Germany and this is a record of this species. Therefore, the aquarium-strain Lyretail has been circulating from hobbyist to hobbyist for a very long time.

There is a wide distribution of fish in the coastal forests of northwest Gabon to the southwest of the Congo. Additionally, the species has a wide range of hues; some populations are more vibrant, while others are more subdued. Port Gentil (BSWG 97/24), Cape Esterias (EBT 96/27), and Parq du Mondah (BDBG 04/19) are three of the natural populations of A. australe now available in the hobby. In addition to the collector’s last name and place code, location codes often provide a year of collection.

The female killifish, like most of the Killies species, is drab when compared to its male counterparts, which has a lighter brown body with somewhat fewer red spots and without paired fins–the caudal is rounded, rather than the extended structure seen on the males.

The best manner in which to maintain this peaceful species is to keep it in a small soft water aquarium with a good supply of plants and bogwood to make sure it remains healthy. It is also highly recommended to use a peat filtration system. It is perfectly safe to keep this species alongside other small, peaceful fish with the same requirements and needs such as pencilfishes, Kuhli loaches, Corydoras species or Croaking/Sparkling Gouramis, and so on.

In an aquarium, the water movement must be gentle in order to mimic the slow movement of water that these fish are accustomed to in their wild habitat. It would be great if your aquarium had surface cover in the form of floating plants, and it would be especially useful if the coverslides matched tightly, as these fish are accomplished jumpers. Chocolate Lyretail Killifish does not have a seasonal occurrence, making it an excellent choice as a killifish first-time keeper who has no experience caring for this family of fish.

This species, Chocolate Lyretail Killifish, is strictly a carnivore, which means that they will not be seen chomping on the plants you have placed in the community tank. As a result of their tiny size, you may feed them cyclops, baby brine shrimp, mosquito larvae, daphnia, and other similar foods. They like meaty items, but we must make sure that they are sized appropriately for the killifish’s mouth so that they do not find it difficult to chew them.

Chocolate Lyretail Killifish is not just timid in social situations, but they will also maintain this behavior if they are fed. Depending on how rowdy his tank mates are, Lyretail Killie may prefer to hide rather than come out to eat the meals you’ve supplied for him.

At this stage, you would need to do a visual feeding in order to determine whether or not your Chocolate Lyretail Killifish has acquired a fair portion of the meals in the communal tank.

Chocolate Lyretail Killifish are a fantastic option for both beginning and seasoned fish keepers due to their ability to adapt to a variety of water conditions. Furthermore, since they are naturally calm, they can get along with a wide variety of different fish species with relative ease.

The Chocolate Lyretail killifish, like the majority of other killifish species, may be found in shallow waters in the wild. When you are setting up your aquarium, it is important to keep this in mind. You should set up a long, shallow tank with a lots of ornamental elements such as driftwood, pebbles, and gravel to make it seem more appealing. As an additional precaution, you should give floating plants so that the fish have plenty of hiding places.

The aquarium should have a reasonable size in terms of volume because there should be plenty of space for the fish to swim about and explore. If you overcrowd your aquarium with a large number of different species of fish, the Chocolate Lyretail killifish will get anxious and become lethargic, their colors becoming bland.

You should also make sure that your aquarium is adequately secured so that they do not have any opportunities to escape. They are fond of leaping, just like any other killifish, and they cannot survive for an extended period of time out of water.

Chocolate Lyretail Killifish are non-annual killifish, which means that their life cycle is not restricted to a single calendar year. As a result, they prefer to spend their time in permanent bodies of water in the natural environment. Currents in the water of your aquarium should be avoided at all costs since they will interfere with the swimming activity of your fish.

They are at ease in dim lighting, so you should notice that there is no sunshine shining directly into the aquarium all of the time.

It is important to note that not each species in these families is compatible with Chocolate Lyretail Killifish. Because of this, you must do more study about the interactions and unique characteristics of the tank mates before introducing any of these individuals to the communal tank with Lyretail Killie. It would also be beneficial to group together those who consume similar diets.

Another guideline for tank mates is that they must not have a noisy personality that might scare Chocolate Lyretail Killifish and cause them to be hesitant to come out of their hiding spot. Furthermore, tank mates should be capable of thriving in shaded and highly vegetated settings as well as in open water.

If you want to broaden your selections and information about Chocolate Lyretail Killifish’s tank mates, you may turn to some online resources. Consult with local experienced aquarists or look for discussion groups related to Lyretail Killie on the internet. Because there are so many variations, your investigation would be really beneficial.

The breeding technique for Chocolate Lyretail killifish is a simple and straightforward one. The only precaution you need take to ensure that they reproduce successfully is to arrange them in a ratio of at least two to three females to one male at the time of breeding.

This species of killifish is an extremely continuous breeder, and its eggs are often laid on the leaves of plants or mops.

Experiential fish caretakers may sometimes raise the temperature in the tank to encourage reproduction. Following spawning, you will not need to remove the eggs from your main tank. And it will take roughly a month for the eggs to develop.

You should move the fry to a new tank as soon as they emerge. This new aquarium does not have to be large, and it does not have to be filled with thick vegetation. In addition, live brine shrimp should be fed to newly hatched fish from the first day they are born, and daily attention should be given to them. In order to prevent hazardous materials from building up in your tank water, be sure you clean it every day.

To tell the difference between male and female fry, look at their colors as they develop. Unlike males, females do not have pointed fins, but rather rounded fins.

After spawning, the Chocolate Lyretail killifish will not be able to survive for much longer. They will live for roughly two months until they die.

A dark substrate will let the vibrantly colored Chocolate Lyretail killifish to shine. Besides, it’s a good idea to give your fish live food on a regular basis to keep them happy and active in your aquarium.

Should Chocolate Lyretail Killifish be kept in pairs?

Like other killifish, the males of Chocolate Lyretail Killifish may be aggressive towards each other in communal tanks. Therefore, if you’re a newbie, we suggest keeping a pair of killies in a species-specific tank.

Are Chocolate Lyretail Killifish for beginners?

One of the easiest fish to breed and maintain in an aquarium is the Chocolate Lyretail Killifish. It is a wonderfully beautiful fish, and the way it spawns is interesting to see as well. However, as with many annuals, a newbie will have to wait a few months between the initial spawn and the first hatch.

Can you put Chocolate Lyretail Killifish with Betta?

The answer is no. Chocolate Lyretail Killifish are unable to coexist with bettas. It is possible for bettas to feed on the eggs and fry of killifish, and if the two are housed together, they may become violent against one another.