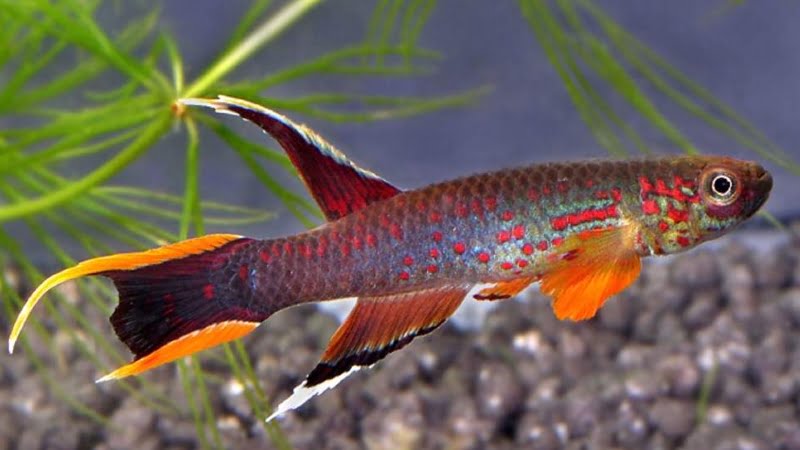 There are two different colours to choose from when choosing an australe. This type of fish is naturally brown and is referred to as ”’chocolate” in the aquarium hobby, but there is also a mutant form known as “gold” that is orange.

It was created via natural mutation by a Finnish aquarist called Hjerssen in 1952. On average, the males of this species grow to be about 6 cm in length, whereas the females are a little shorter.

A characteristic of this species is its caudal fin, which is shaped like a lyre. Lastly, the females appear much less colourful; in the wild form, they have a brownish tan coloration, while in the gold/orange form, they are a light tan, and they also have rounded fins.

An Overview Of The Origins Of Aphyosemion Australe

A lot of the aquarium hobbyists have been familiar with the Cape Lopez lyretail for more than a century.

I am not surprised that it is very popular, especially among other species of well-known species such as Fondulopanchax gardneri, Aplocheilus lineatus, and Aphyosemion striatum.

Despite its easy breeding and easy keeping characteristics, this species is an excellent choice for newcomers to killie keeping, as many experienced keepers advise newbies to start off with it because it is easy to maintain and keep and breed successfully.

The name of this fish has changed a number of times since its discovery, as happens so often in the scientific community.

It was not until 1913 when Arnold & Cramp published the first description of the imported specimens from Kap Lopez as Haplochilus from Kap Lopez that the species was introduced into Germany.

In 1921, he proposed the name Haplochilus australis for this fish. Moreover, the first record of Panchax polychromus from the Cape Lopez area of Gabon was made by Ahl in 1924 based upon 27 specimens collected there.

There was a later investigation that confirmed they were a population of A.australe that lived in an aquarium.

This species was collected by the German merchant ship Waganda in 1928 while traveling through Port Gentil in Gabon, and these fish were brought into Germany in a live state as soon as they were caught.

In other words, our aquarium-strain lyretails were around the hobby for a very long time before we came into existence.

Apparently, this species of fish can be found in coastal forest areas from the northwestern part of Gabon up to the southwest corner of the Congo.

In addition to color variation in the species, there is also variability in population coloration as some populations display more vibrant colors, while others exhibit a more plain appearance.

There are a lot of red spots and markings on the body of male fishes, as well as brown or golden spots on the fins. There is a bright iridescent green area behind the head of all male fishes.

It is actually the caudal fin of this fish, which also bears the name lyretail due to the shape and size of its long, white extension; the extension can reach up to 12 inches (30 millimeters).

Killifish are unlike most other fish found in the ocean, which are generally drab looking. They are mostly brown in color, with a much smaller number of red spots and the unpaired fins–the caudal has a rounded shape, as opposed to the long extensions found in the males.

This species displays a golden or orange variant as well. However, this specimen is not a subspecies but rather simply a mutation of the chocolate form of A.australe.

Generally, the chocolate brown colors on the body of this species have been replaced by orange. A.australe hjerreseni: this orange variant was originally described by Meinken in 1953, but the name it bears is incorrect.

It bears the name of the breeder Hjerresen, who discovered the first specimens in his collection that bore this color.

It can be suggested that some breeders produce extraordinary strains of this variant, which is certainly more attractive than the original chocolate strain.

It is perfectly possible to maintain Cape Lopez lyretails within a communal aquaria because I have observed that they do not hurt other species of similar size.

When a larger male chases a smaller one, he will end up doing quite a bit. There is a preference to avoid adding fish that are aggressive or fin-nipping to your aquarium.

If you do this, the males’ beautiful tail extensions will disappear under such conditions. In addition to the aforementioned, small rasbora tetras and barbs are also suitable companions.

They are not afraid of being handled by people. The majority of them readily display, and when they sense their owner is going to feed them they come to the front of the tank.

As opposed to Rivulus species found in South America, Lyretails do not jump, so it would be advisable to have the top of the tank covered to keep from having unpleasant outcomes.

There seems to be a preference for A.australein soft water, so for every 10 gallons (38 liters) of water, I put a teaspoon of aquarium salt.

If at all possible, it would be best to avoid hard water conditions because, even though the fish might survive, they will not be able to reproduce. It would be ideal if the pH of the water was between 6.5 and 7.0.

According to my research, the optimal temperature for keeping these fish is anywhere between 76° and 78°F (approximately 25°C).

For the most part, live foods are preferred to crushed flakes, micro pellets, and frozen foods although, I have “trained” my Kryptonite to take these as well.

It is due to the simplicity of breeding this fish in an aquarium and its ease of maintenance that this killifish is considered a favorite of those just starting out.

Depending on the number of pairs or trios, I find that it is best to put the pair into a small tank of 5 gallons (19 liters) for a week, give the mop a few dark-colored acrylic spawning mops, then collect the eggs over the following week or so.

Breeders will produce more eggs if live foods are fed to them, so it makes incubation in water of the eggs, which are round and clear and have a diameter of 1 mm, can be done through mops. They hatch within 10 to 20 days.

The eggs can also be stored in damp peat for approximately three weeks at 76 degrees Fahrenheit (25 degrees Celsius), and then the peat is allowed to become fully wet, causing the eggs to hatch.

The aquarist can monitor the development of the embryos and the eventual hatching of the eggs if they are collected and stored in water.

By using this water method, any white eggs (infertile or fungus-infested) that have been laid can be removed, even though the process of collecting eggs is time-consuming.

It is indeed possible to grow a plant in a tank, but it would not be so easy. I simply put a small amount of peat or peat fibre at the bottom of the tank and harvest it after a few weeks.

My expectations are that I will get anywhere from 40 to 60 fry from the breeders if they are well fed. In my experience, if I use the damp peat method, the eggs hatch uniformly, and all hatch within 24 to 48 hours.

However, does it happen that some of the eggs fail to develop and remain clear? This may occur once in a while, but I’ve seen undeveloped eggs before.

I think the peat method of preserving species is nature’s way of ensuring its survival in the event that the water levels drop to dangerously low levels, and that the species will be preserved only by the eggs, with the adults dying off the adults dying.

If the parent fish have adequate live food in their tanks, the fry will also appear spontaneously if there is adequate food for the parents.

These little black spots usually appear in the dark corners of the tanks as black slivers. The first week, they require infusoria, and after that, they go straight to brine shrimp and micro worms that have just hatched.

At first, they are fairly shy and tend to flee into the darkness at the first hint of danger whether it is real or imagined. Although if you provide plenty of nutrition and change the water regularly, growth is rather rapid.

It is not uncommon for the fry to reach a size of 12 inches (1.2 cm) within six to eight weeks.

Usually, it is wise to begin separating the bigger fry from the smaller fry at this point in time to avoid any possible cannibalistic tendency on the part of the larger fry.

As soon as the fry are hatching, they display female coloring, but once the young males are developing their characteristic caudal fin extensions, they start to show this characteristic coloring.

If the fry starts to become distinguished by gender, I tend to separate them as soon as they appear, because the aggressive males are more likely to outcompete the smaller females for food, so I might end up with fewer females than males. There tends to be a pretty even split between the sexes.

It is one of the prettiest, most active types of killifish, so it is no wonder that this fish enjoys such great popularity among aquarium hobbyists.

This is not surprising, given that we are living in an age where aquarists are increasingly interested in both chocolate and orange mutants of this species of fish.

Do australe killifish have an annual life cycle?

It is generally found living in permanent waters like swamps and small streams, and is not a species that occurs every year.

Is it necessary for chocolate australe killifish to be kept in pairs?

The chocolate australe killifish are often peaceful, and they are often willing to interact with each other in a community tank, however, they can be aggressive towards each other when they are young.

Due to this, if you’re a beginner, we recommend keeping at least two killifish in a tank where only that species of fish can be kept.

It is not necessary to have an air pump to keep killifish alive. This species of fish is a hardy one that doesn’t require the use of an air pump.

The only requirement they need is a tight-fitting lid over their tanks (they are jumpers), a heater, a faucet with a water filter, enough swimming space, and a well-balanced diet.