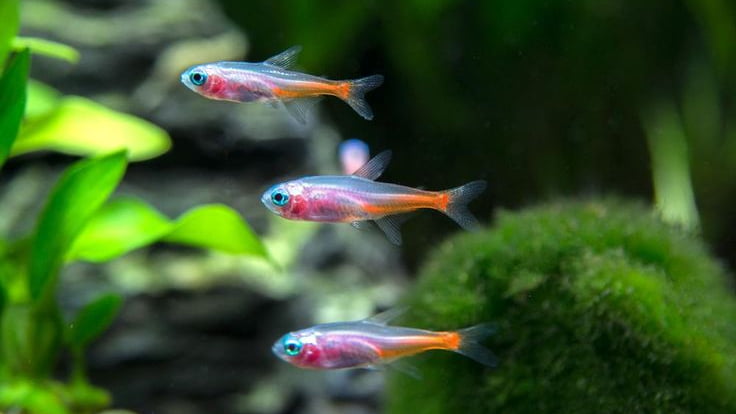 You have almost certainly been familiar with the well-known Neon Tetra if you have an aquarium or are otherwise passionate about fish. Neon Tetras are brightly colored tropical fish native to South American streams. However, since their popularity has grown, the majority of them are currently raised in eastern nations such as China and Thailand.

The Neon Tetra relies on a stable temperature to thrive in its environment. In addition to affecting their health, the temperature has a significant impact on their ability to reproduce. Hence, this raises the question for many aquarists: “Can neon tetras survive in cold water?”

In this article, I will answer this question and give you some examples of what could happen if you kept the neon tetras in cold water.

If you are new to the hobby of keeping fish, you may think that all you need to do is place your newly acquired scaled companions in an aquarium that has been filled with water from the sink and then treated with a water conditioner. However, this is not the case. So, is it possible for neon tetras to survive in water that is too cold?

The water parameters of each fish are varied since they are supposed to simulate the natural habitat in which fish are found in the wild. The Amazon basin in South America is home to a large population of neon tetras that may be found in the wild. Because they originate from warm oceans, they need warm water in their tanks as well, which means they can not survive in cold water.

The Amazon basin’s water temperature ranges from 72 °F to 80 °F. So, the optimal temperature for Neon Tetra is between 72 and 78 degrees Fahrenheit.

In point of fact, with the exception of the Bloodfin Tetras and the Bueno Aires Tetras, all of the other members of the Tetra family, including the Neon Tetras, prefer warmer water.

However, it’s not always the case that Neon Tetras will die the moment you introduce them to cold water. They will be able to live for a certain period of time and attempt to adapt to the harsh conditions of the cold water.

However, in the long run, the Tetras will succumb to the effects of living in cold water since the lower temperature causes them stress. This condition is the consequence of a malfunctioning metabolism as well as possible illnesses.

In addition, they will begin exhibiting a variety of other effects, such as a fading of their colors, sinking habits, growth on the mouth of the Neon Tetra, and the development of a variety of illnesses. Because of this, Neon Tetras cannot survive in water that is too cold for them.

In conclusion, putting your tetras in water that is too cold for them may be dangerous to their health, and it can even cause them to die. Because of this, you should try to avoid doing so as much as possible.

What Would Happen If You Put Neon Tetras In Cold Water?

When neon tetras are kept in water that is extremely cold for them, they almost never survive. They may be able to tolerate lower temperatures for a limited amount of time in an emergency situation, such as if you suddenly lost electricity and were unable to heat your water. But in the long run, they will be harmed by it. The following are some bad effects if your neon tetras are kept in cold water for a long time.

When introduced to water that is too cold, fish are at risk of going into shock. Even water as cold as 60 degrees Fahrenheit might possibly shock and kill your fish if they are exposed to it long enough. Neon tetras are quite vulnerable, and it is not recommended to put them in water that is too cold for them. Even if you were successful in removing your neon tetra from the water before it passed away, there is still a great probability that the fish will suffer considerable and lasting deterioration, which may significantly cut down on the fish’s lifetime.

There is a risk of stress for neon tetras when the water temperature drops. You will also note that their normally brilliant colors begin to fade when they are stressed out. When they are under a great deal of pressure, they moreover have a propensity to move in an irregular manner. This is most likely to occur if the water in your tank begins to become too cold for comfort or if you are transferring fish from one water temperature to another.

Neon tetras’ metabolisms slow down significantly if the water they live in is not at the appropriate temperature. Fish have no circulatory system of their own; as a result, their body temperature is dependent on the temperature of their environment. When their temperatures fall to less than 70 degrees Fahrenheit and they begin to experience a cooler climate. Then, their bodies will begin to slow down, and they will have difficulty digesting food and breathing; if this continues for an extended amount of time, it may be deadly.

Your fish are at risk of developing fin rot if they are kept in waters that are too cool. It is possible for fish to suffer from a disease known as fin rot if their immune systems are not functioning as well as they should be. This is a dangerous condition in which the fish’s fins become brittle and rot away as a result of bacterial infection. As the fish’s fins rot, they are likely to have difficulty swimming, or they may succumb to the condition and end up dying as a result.

Ich and other diseases

When neon tetras are kept in water that is cool or too cold, they are more likely to get infected with a wide variety of different illnesses.

Ich is a disease caused by a parasite found in aquatic environments. And this disease leads to white patches growing on many fish’s scales. It’s particularly frequent in the tanks of chain pet stores since that’s where they get their big shipments of tropical fish to sell. If you maintain your aquarium at too low of a temperature, your fish are more likely to experience stress, which makes them more susceptible to ich.

Ich is simple to identify. All you need to do is look for the white, fuzzy patches that are sprouting all over the scales of your fish.

And it is important to note that ich can kill your fish if you don’t cure it fast. However, it’s also pretty easy to treat if you maintain the water warm enough for your neon tetras to have a fully functioning immune system.

What temperature is necessary for neon tetra to thrive?

Although neon tetras prefer soft water, they may survive in medium-hard water provided the quality is good enough. For short periods of time, they can withstand hard water, but prolonged exposure to hard water may have detrimental consequences on their lifespans.

Do neon tetras require a heater?

An aquarium heater is a critical piece of equipment for maintaining the proper temperature in a Neon Tetra tank. In order to keep them in their natural habitat, they must be housed in heated tanks. Even while the temperature in your aquarium may reach the ideal range for most of the day, it is still not enough for the neon tetras.
A heater for your aquarium is an absolute necessity, and your Neon Tetra will be eternally grateful. There is a large selection of heaters available, and it is important to choose the right one for your needs.