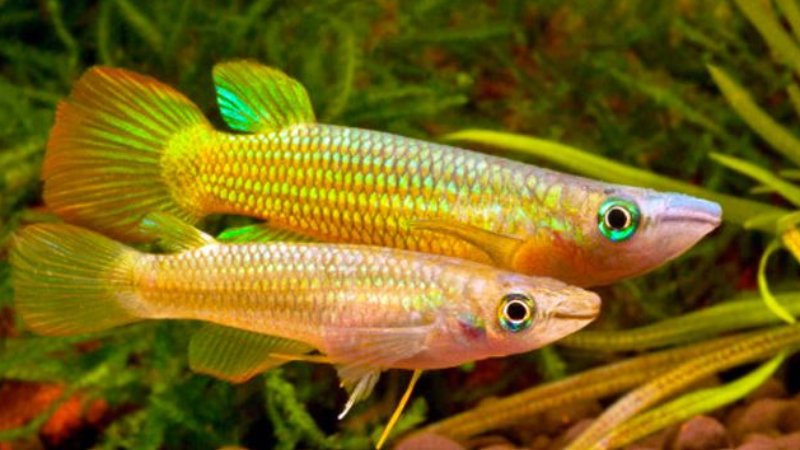 The Golden Wonder Killifish are becoming more and more popular among lots of species of fish kept in aquariums. As a result, there are an increasing number of fishkeepers trying to find an effective method of breeding Golden Wonder Killifish. Below are some useful information about their breeding and advice on how to reproduce them.

As I mentioned above, Golden Wonder Killifish seem to be very popular right now, and it appears that they are in high demand all the time. Their hardiness and tolerance to a wide range of water parameters make them an excellent choice. Additionally, they are long-living, attractive, easily breedable, and somewhat unusual. These fish lay eggs, like any other killifish. It is known that Golden Wonder Killifish lay their eggs on aquatic vegetation in the wild. After the eggs have hatched, the eggs and the offspring do not receive any parental care from their parents.

Here are some signs helping you distinguish between male and female Golden Wonder Killifish.

All of the males of this species are covered with a golden shine, which lends the species its popular name.

Similarly, females might seem to have a golden shine to them when exposed to the appropriate light; however, this sheen will be significantly less noticeable. Compared to males, females tend to be a darker shade of silver-gray.

Males have a striking greenish-blue tint to their iris.

Compared to males, females’ eyes may be a little more iridescent in color, but they are still far less vibrant.

Males are often bigger than females.

Now that you’ve learned the distinction between male and female, you’ll be able to tell them apart. It is time for you to begin breeding these creatures. If you recently bought the fish, let them a couple of weeks to become used to their new home before you try to breed them.

Non-annuals, semi-annuals, and annuals are all types of spawning that may occur.

Breeding this species begins with finding a suitable place for them to live. For one or two pairs, a fully-cycled 20-gallon tank is a decent starting point. Due to the fact that this species prefers to devote the majority of its time on the surface, long tanks are preferable over those with high sides. As a result, the surface area of the water is more essential than its depth. In addition, because all killifish are great jumpers, it is essential to have a tight-fitting lid in order to prevent them from escaping.

For the most part, you’ll maintain both males and females in a 20-gallon planted tank. Nevertheless, it also requires a 10-gallon tank for reproductive purposes.

Following is everything you’ll need for the breeding aquarium.

Once setting up a suitable tank environment for breeding Golden Wonder Killifish, here are 2 easiest and most effective methods I recommend for you:

Water should be removed from the breeding tank and placed in a shallow plastic container, which is about 1-2 gallons in volume. Here you’ll be keeping the eggs while they’re incubating. Ensure that the container’s water level is sufficient to completely immerse the spawning mop (s). In addition, keep in mind not to remove any breeding tank debris while siphoning off the water.

Adding an antifungal chemical to the incubation container’s water will prevent the eggs from developing fungus. A number of options are available. However, methylene blue is the most commonly used anti-fungal. Alerting!! It’s very hazardous and will leave a stain on whatever it touches.

Lots of people like to use 3 percent Hydrogen Peroxide. It is non-toxic, affordable, just as effective, and accessible at any drugstore. 10 -20 drops per gallon of water can help battle the terrible egg fungus. One disadvantage of using it is that it loses potency with time, requiring you to replenish it with 10-20 additional drops each gallon of water every 12 hours.

As soon as you have applied the antifungal of your choice, take your spawning mops from its breeding tank and transfer them to your shallow eggs incubation container. The eggs will not be damaged if exposed to the air for a brief period of time, provided that they stay wet.

The water in the incubation container must be maintained at or above 76 degrees Fahrenheit when you’re in a cold environment. The incubation time will be reduced if the temperature is increased. In addition, an air stone should be placed in the container to supply the eggs with some water movement and oxygen. Finally, the incubation container should be covered to keep out dust, pests, and other contaminants. It’s preferable to maintain my incubators in a dark area.

On a daily basis until the viable eggs hatch, look for and eliminate any eggs that have been infected with fungus.

For the fishkeepers, this method is the favored method since it is more efficient and requires less handling of the eggs. Nevertheless, let’s have a look at another approach.

During the first 24 hours after spawning stops or slows down, remove an egg-filled mop from the breeding tank. Make sure you have a clean towel and damp fingers to take the eggs out of the mop. Unexpectedly, the eggs are rather huge and quite resilient. Check each strand of the mop for eggs while going through it one at a time. In the process of removing the eggs from the mop, put them into a shallow container filled with breeding tank water and choose an anti-fungal agent to use. . The water just has to be 2 inches deep for this to work properly. Additionally, it is better to include an air stone with a gentle bubble and a cover.

If you choose this technique, you may also utilize extremely tiny containers, such as deli cups and margarine tubs, as incubation vessels for your experiments. These containers may then be placed in the main tank and floated about. Moreover, there should be no more than 10-12 eggs per container to avoid overcrowding.

The advantage of this method is the removal of eggs from the spawning mop. This makes it simpler to identify and remove the fungus-infected eggs, then will save time and effort in the future. However, there will be some disadvantages. Because you must handle the eggs, you risk damaging them and decreasing your hatch rate. Picking the eggs out of the spawning mop by hand also takes much longer.

No matter what technique you pick, after around 10 -14 days the fertile eggs will hatch into free-swimming fry. Fry should be stored in a tiny container so they can readily find their meal. And the fry may subsequently be fed with baby brine shrimp, micro worms, and vinegar eels. To make cleaning the fry tank simpler, the bottom should be bare. Male and female fish may be distinguished after two months, and immature fish are ready to breed after five months. They have a three-to-four-year life expectancy.

Additional ideas, suggestions, and information to assist you in achieving success

To complete the breeding process, the parent Golden Wonder Killifish lay huge eggs that attach to floating plants. They typically lay between 100 and 150 eggs at a time. Therefore, once the eggs have hatched, we suggest that you move them to a new tank for the fry’s care.   After the eggs have hatched, there is no need to keep the parent fishes in the tank since they lack a strong parental instinct.

The eggs hatch after around 14 days, but you can still see the egg sac clinging to the bottom of their body. That is what the fry eat for many days before they are able to swim on their own. Keep the fry healthy and happy by feeding them enough protein-rich, bite-sized food. Fry meal powders and fry Brine Shrimp are excellent feedable alternatives for your baby fish.

Is it easy to breed Golden Wonder Killifish?

When it comes to keeping captive-bred fish, the Golden Wonder Killifish is regarded as one of the most straightforward. They do not need to remove their eggs after spawning since they are not annual species. The ideal breeding habitat is a soft water aquarium with a variety of free-floating aquatic plants.

It is possible that they will eat their fries. Thus, you must maintain them in a different tank in order to avoid this from occurring. Crushed bloodworms, as well as other tiny insects, are the primary food source for the fry.