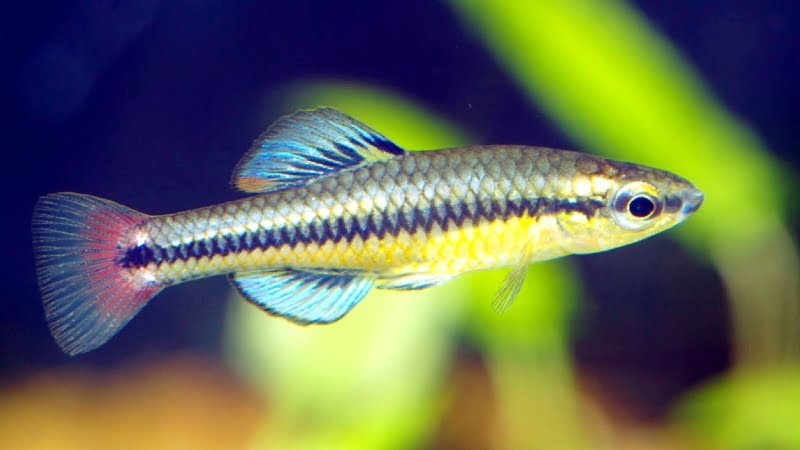 Bluefin Killifish originates in North America, along Atlantic Coast or southeastern Alabama in the Chipola River drainage, and is a freshwater type. It is not hard to see this vastly colorful and tiny-bodied Killifish that quickly catch your heart in each aquarium store.

Did you decide to have some of this beautiful and engaging Killifish? Or plan to own them in the future? If so, this article indeed provides all tips for Bluefin Killifish care!

Basic Information That All Bluefin Killifish Hobbyists Should Know

First, let’s review some basic information about them.

Bluefin killifish does better in aquariums with many plants. Your Bluefin killifish tank will benefit significantly from adding Java moss, banana plants, and elodea. You know, they need space to swim freely, hide and forage in. In a species tank, where they may interact with their tank mates, they’ll be less shy and more lively.

A five-gallon tank seems enough for a couple of Bluefin. And don’t forget regular weekly water changes and maintain natural light. These guys are diurnal, so these tips are essential for making them be happiest Bluefins. A photoperiod of 12L:12D or 14L:10D is recommended.

Other recommendations for water:

Bluefins are easy to breed. Because they’re omnivores, invertebrates such as mosquito larva, snails, and scuds are the preferred prey of bluefins, which prefer to eat them. Algae on aquatic plants can also attract bluefins. Frozen bloodworms are the best option if you have a finicky eater like a wild captured or pond/tub raised fish. The suitable feeding frequency is twice a day.

There is a reproductive peak from late March to mid-summer for the majority of its range, but some populations appear to reproduce throughout the year. While it may seem difficult at first, breeding is quite simple as long as you have plenty of plants, such as Java Moss or spawning mop under bright light, and feed them live/frozen food. Providing the fry with green water and then newly hatching brine shrimp will allow you to breed Bluefins in your aquarium. As a result, bluefins are the favorite native killifish for many breeders because of their playful personalities and easy care. Eggs are laid at the bottom of the mop. Open water/substrate egg scatterers can produce up to 200 eggs.

No need to worry if you have other aquarium fish species at home. This is rare to meet Bluefin Killifish to be aggressive, so you can keep them with other peaceful aquarium species such as Bee Shrimp or Tetras.

Additionally, please keep in mind this tip obtained from numerous experienced breeders. Due to Bluefins’ fairly quiet nature, it should not be kept alongside loud tank mates.

Parents can eat their fries, so you need to inspect the spawning substrates and remove the eggs within 1-2 hours after the lights are turned on. Additionally, there is a slight seasonal effect, even if they are not exposed to natural light.

Besides, it seems that the color of the fish and the quality of the water in which it lives can change. It is not hard to see this fish in bad shape, in a crowded tank, and without the bright colors that made it so well-known.

Do killifish need a heater?

The answer is based on what species of your Killifish is. For Bluefins, you will need one if you’re living in a polar climate zone. This area may have the warmest month at less than 50°F (10°C), while Bluefins should be kept between 75°F and 80°F.