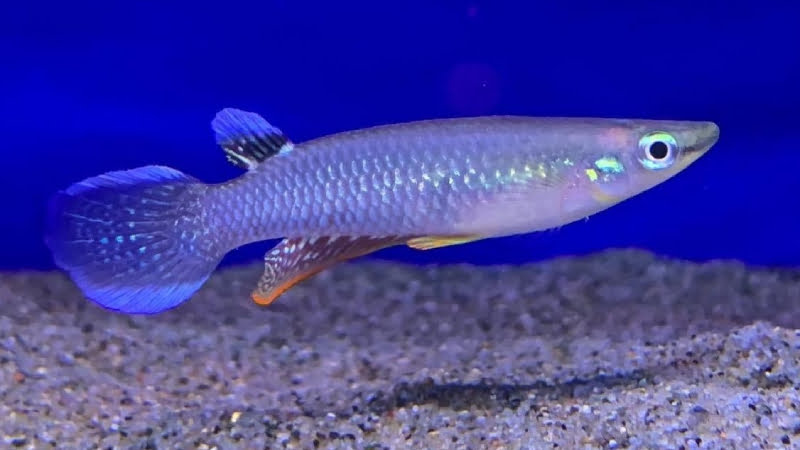 If you are selecting a species of fish to add to your home aquarium, why don’t you consider a Blue Panchax Killifish? This will be a terrific alternative that makes your tank vibrant with an attractive look of fish. The article below will give you all the facts you need to know in case you wish to maintain the Blue Panchax Killifish.

Anglocheilus panchax or Blue Panchax Killifish (Aplocheilus panchax) is a panchaxian fish described by Hamilton in 1822.  This species may be found in the following countries: Pakistan; India; Bangladesh; Myanmar; Malaysia; Indonesia; Nepal; Cambodia; Viet Nam,; and Sri Lanka Spotted Medaka, Orangetail Killifish, Blue Eye Killifish, Blue Panchax, and Spotted Ricefish are some of their other names. The IUCN red list does not include this species.

The Blue Panchax may be found in ponds, fields, and canals; they like clear water places with a lot of flora or the roots of mangrove trees. A few hot springs have also been discovered in Singapore where these fish are present, as well as in hypersaline waters. As a result of being introduced to new locations, their natural habitat has grown as a result of the larvae they feed on. In the wild, these fish mostly eat insects and larvae, which are their primary sources of nutrition.

The Blue Panchax Killifish’s body is long and thin, with a dorsal fin that extends all the way to the rear. Its scales are also spherical. They also feature a flattened skull on top, a sharp nose, and an upturned mouth with no barbels.

Their fundamental coloring scheme is an iridescent blue body with a black dorsal fin patch. On the fins of certain races, there may be variable quantities of red or orange. Besides, a  minor amount of yellow, green, red, or orange may be present in the body’s colour.

How To Raise The Blue Panchax Killifish

The Blue Panchax may be found in densely forested canals, ditches, reservoirs, ponds, and lowland wetlands. They are known to go into somewhat brackish waters in mangrove creeks, where they flourish on mosquito larvae that settle on the water’s surface. When keeping a pair of these top-dwelling fish together, a 3ft long aquarium is required. However, when a bigger group (including additional males) is maintained in the same place, a larger tank is required.

If feasible, the aquarium should be decorated with a variety of plants, including floating ones. In this way, the fish will have a natural network of places where they can hide and where they live. In addition, driftwood tangles may also be added to provide extra shelter. Due to the fact that blue panchax are skilled jumpers, it is critical that the tank possesses snug-fitting cover slides.

Because they are known to take insects and bug larvae off the water’s surface in the wild, these fish need a wide range of meaty frozen meals to keep them healthy. Bloodworm and white mosquito larvae are the favored prey; however, they will also eat brine shrimp and daphnia, which are high in vitamins.

Blue Panchax are highly resilient fish, and illness is seldom a concern in their aquariums if they are kept in good condition. However, there is no assurance that you won’t have to deal with health issues or sickness in the future. If water quality is poor, they are more vulnerable to velvet and bacterial infections.

It is a nice thing about Blue Panchax Killifish that a disease epidemic may be contained to only one or a few fishes if the problem is addressed early enough. Especially when raising more sensitive varieties of fish, it is typical for all of the fishes to get sick before the first indications of illness can be detected.

In this circumstance, giving your Blue Panchax the right surroundings and a well-balanced food is the greatest method to avoid illness in advance. Fish will be happier and healthier if they are closer to their native environment. Moreover, it’s more probable that a sick fish will become sick if it’s stressed out.

The Blue Panchax Killifish is typically calm with other types of fish, although they do sometimes squabble amongst themselves. Most of the time, this kind of combat does not result in any physical harm being done. The best way is to keep them among other peaceful fish of a similar size or bigger for the greatest possible living conditions.

These fish are predators with very large mouths. As a result, they should never be mixed with tiny community fish, such as Neon Tetras, as they will quickly become a snack. Keeping Blue Panchax with medium-sized fish who are placid and do not occupy the same extreme uppermost level of the tank is recommended for optimal results. In its natural habitats, this species is known as the ‘White Spot,’ due to the distinctive silver-white patch on top of the head when seen from above.

Egg layers like the Blue Panchax are quite simple to breed. After several weeks, a healthy couple may produce 130-300 eggs a day. For the most part, they’ll lay their eggs amid fine-leaved plants like Java Moss or in neat mop-like nests. Also, the removal and replacement of the spawning substrate holding eggs are quite straightforward.

In order to successfully reproduce in soft water, the selected conditioned couple should be introduced to an aquarium containing huge clumps of fine-leaved plants as well as floating plants. For some aquarists, conditioning male and female fish separately before breeding is the preferred method.

Eggs are laid on the water’s surface near plants, where they will hatch and grow to be enormous in size. After that, it is easy to transfer the young ones into another growing-on tank in order that they do not become prey to the parent fish. If you wish, you can also remove the parent fish from this aquarium once the spawning process has ended.

The eggs should hatch in 9-14 days (depending on temperature), and the young should be fed finely powdered ‘first meals’ and freshly born brine shrimp. However, please note that feeding may soon become a source of pollution if food is left unconsumed.

Additionally, there is a risk of cannibalism since some of the fries may mature more quickly than others. So, sorting the fry by size will help you avoid this problem and effectively grow as many of them as possible.

What class of animal does a Blue Panchax Killifish belong to?

How do Blue Panchax Killifish communicate?

The fins and eyes of Panchax are used to communicate. Unlike humans, they are able to see color in a way that we cannot. They have three-dimensional vision and more than 100 different kinds of pigment cells in their eyes. In order to detect food, predators, and other fish, they make use of these sensors. They also use fin clicks, vibrations, and color shifts to communicate with others.

How fast can a Blue Panchax swim?

Due to the fact that they do not swim quickly, these gentle killifish like to associate with slow eaters and swimmers.

Would Blue Panchax Killifish be a good pet?

Because of its flexibility and adaptability, the Blue Panchax killifish is a popular aquarium fish. Additionally, feeding and caring for them isn’t difficult or time-consuming. And, unless there are an excessive number of fish, they don’t require a huge aquarium.