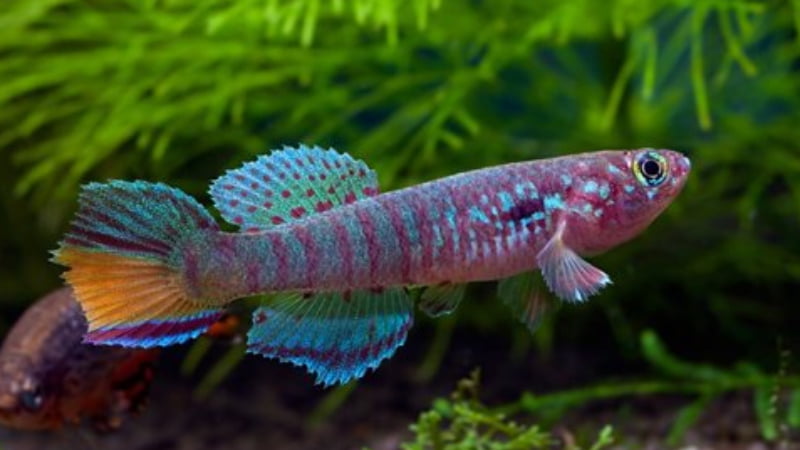 Blue Gularis Killifish are among the most visually appealing killifish species available. So many tropical fish keepers consider them to be among the most well-known and highly sought after of all killifishes.

Consider the following information of killifish and their requirements, which will help you decide whether they are the ideal aquarium fish for you or not.

It is known variously as the blue gularis, golden pheasant gularis, or red aphyosemion, and it is a species of toothcarp that is native to the Niger delta region. This species can only be found in two countries: Nigeria and Cameroon. The species is named after Bror Yngve Sjöstedt (1866 – 1948), a Swedish naturalist who discovered the type specimen near a waterfall by the Ndian River, in the Ndian department, Cameroon’s Southwest Region.

This species exhibits sexual dimorphism in its male and female forms. The males are more colorful and bigger than the females, and they display a variety of eye-catching colors. They are far larger than any other members of their genus, reaching lengths of 14 cm (5.5 in). It is a robust and predatory species that preys on invertebrates as well as tiny fish and other small animals. Nonetheless, this species doesn’t even rank among the largest; a case in point is the Gulf killifish (Fundulus grandis), which can reach a maximum length of 18 centimeters

Blue Gularis Killifish is a large, colorful, semi-aggressive, and extremely colorful species of the genus Gularis. It is able to produce long spikes or streamers from its tail tips, which frequently appear on the tips of the head.

Unlike females, males have a different color pattern that is mostly blue on the back as well as orangeish colored on the flanks, having dark reddish-brown stripes running through it. The sides of the fish are reddish in hue, with white dots placed on top of them, and the head has white spots with red patterns as well.

A brilliant blue and red coloration distinguish adult males, which also have a characteristic three-pronged “ice blue” colored tail that is speckled with irregular black striations and dots.

Light to flaming orange is used to paint the center of the three-pronged tail, with a faint black outline to distinguish it from the other two prongs. There are many brown patches on their pectoral fins, which are trimmed with white along the outside borders and splashed with white spots on the inside. The dorsal fin is golden blue in color and has a pattern that is similar to the caudal fin.

Female Blue Gularis are generally smaller than males and do not have the bright colors as the males. They are normally a drab gray to a brown hue, with faint black dots, stripes, and reddish patches on the fins, as well as faint light red bars behind the eyes, and they have a light red bar behind the eye.

Despite the fact that they will sometimes consume prepared and freeze-dried meals, this should not be their major source of nutrition.

In a community tank, shouldn’t keep them with little guppies, because they will hunt them down and consume them if they are not properly separated.

Use a dark substrate like peat moss or a similar material, and make sure there are enough plants and pieces of wood to provide cover in the tank. It is also advised that you use floating plants to offer shade for them. Also, It is necessary for the cover to be very tight fitting since the species is an adept jumper.

These fish require a minimum tank capacity of 26 gallons, which is about 100 liters. 73-79 degrees Fahrenheit, a pH of 6.0-7.5, and total hardness ranging from 5 to 19 degrees Fahrenheit are ideal conditions for them in their tank.

When housed alongside other calm species that are too big to be considered food, the Blue Gularis may be very happy. Peaceful cichlids, bigger characins, Corydoras catfish, and Loricariids make for excellent tankmates. Males are territorial and violent against one another, so in case more than one is to be kept together, enough room must be allowed for them. It is recommended that females be maintained in small groups of no more than 2 or 3 per man since they may be harassed quite a bit.

Breeding is feasible because of the fact that it is a substrate spawner. When it comes to spawning this fish in an aquarium, there are various different techniques to choose from, and a lot of it comes down to personal opinion. Space is not a concern, though, as a trio of fish may be successfully hatched in an aquarium as tiny as 15′′ x 8′′ x 8′′.

The use of a tiny, air-driven sponge filter to minimize stagnation in killi breeding settings is not a terrible idea, since many breeders do not utilize it in their killi breeding setups. pH 6.5 water (although there have been reports of this species being successfully produced in water as high as pH 8.0) and a temperature of 74-77°F are ideal conditions for this species’ breeding. It is recommended that the tank not be lighted, and that peat filtration be used.

The fish should be fed a diversified diet of live and frozen items while being conditioned. Maintaining separate conditioning tanks for each gender and choosing the best males and plumpest females before putting them in the spawning tank is the best method of keeping the sexes apart. This provides females with time to recuperate between spawnings. In nature, eggs are laid in the substrate; however, in the tank, the spawning medium may be any of the following: a layer of peat moss on the tank floor, spawning mops, or clusters of fine-leaved plants like java moss. The use of peat moss is widely regarded as the most productive way.

If the water conditions are favorable and the fish are in excellent health, spawning should be a straightforward process. Even though the eggs and fry may be left in the fish tank to hatch with the parents, some of the eggs and fry will be eaten by the parents. If you want to nurture a healthy group of baby fries, you should remove the eggs. It is recommended that each trio be allowed to spawn for no more than a week before being returned to the conditioning aquariums. The spawning process is difficult on the fish (especially the females), and if they are left for an extended period of time, they might grow exhausted and feeble.

Once the eggs have been extracted, they may be incubated in either water or peat moss. It should be noted that fungus tends to infect fewer eggs when the latter is used.

If the eggs are to be incubated in water, they may be moved to a small aquarium filled with water taken from the spawning tank to a level of 1-2 inches and containing about 1 to 3 drops of methylene blue, based on the volume. It is imperative to keep the container in darkness (eggs are especially vulnerable to light) and to inspect it daily for fungised eggs, which ought to be removed with a pipette. Hatching will take around 21 days or so depending on the temperature.

In case you incubate in peat moss, I recommend removing the peat moss from the aquarium and letting it dry for 2 or 3 hours on newspaper. It should then be kept refrigerated at 70-75 degrees Fahrenheit in a plastic bag (the zip-lock kind works well). The date, hatching date, and species of each egg should be written on the outside of each bag if you are spawning numerous species or many broods to avoid any catastrophes from occurring.

It is typically possible to stimulate hatching by simply putting the eggs in the raising tank after 10 to 12 weeks of incubation. The soaking of the eggs promotes the hatching of the eggs. Feed brine shrimp nauplii and/or microworms to the fry as early as hatching, but it will take around 2 weeks to introduce bigger, frozen species to the fry diet. The water level must be maintained fairly shallow at first, but as the fry develops in size, the level may be raised.

Where do the Blue Gularis Killifish live?

The Blue Gularis is one of the biggest Killifish species and is mostly found in Nigeria and Cameroon in West Africa.

Does Blue Gularis only come in blue color?

Similar to many other Killifish species, the Blue Gularis is available in a variety of various color morphs that are derived from both captive breeding efforts and naturally occurring regional, varieties such as Gularis “Dwarf Red” and “Niger Delta.”

Blue Gularis may be a difficult species to keep in community tanks. They have a range of temperaments, from neutral to rather aggressive. When fully grown, they are opportunistic predators that can readily consume a little Guppy or Tetra if given the opportunity. On rare occasions, Blue Gularis may nip at tankmates who are unable to feed them.