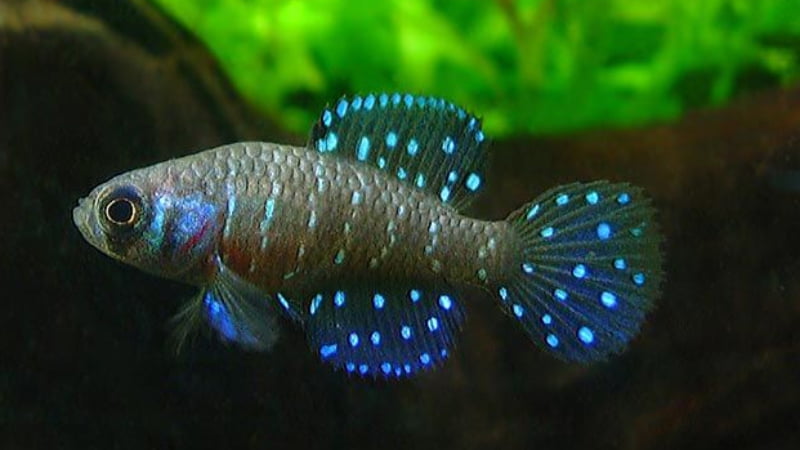 The Black Pearl Killifish, also known as Austrolebias nigripinnis, is a vibrant annual fish that may provide a lot of interest to your aquarium. You can simply maintain them with the bare minimum of maintenance. They are often regarded as the most attractive little aquatic species in the world.

Then why not give it a go and keep one of the world’s cutest freshwater fish in your tank for a while? The following are the top 5 most important information that can aid you in growing them more simply.

Area of distribution: Uruguay and Argentina are home to blackfin pearl killifish.

Physical characteristics: Killifish with a blackfin pearl are seldom greater than 2 inches (5 cm) in length. The fins have a blue-black color with metallic-green edges that are bright and reflective. Pearly white to greenish patches may be seen on all of the fins and the body of this fish.

Social behavior: Females that are not receptive may be harassed excessively by males who are very aggressive. They are best kept separately in a tank. It is not advisable to keep two males together.

This species of pearlfish has a relatively simple sexing process. The coloring of the fishes is commonly used to determine their gender, which is done through visual inspection. This magnificent species is well-known for the blue chromide color that it displays. Typically, both the male and female have a dark brownish stripe down the middle of their bodies.

Breeding success for this species in captivity is dependent on maintaining an ideal temperature range between 59 and 68 degrees Fahrenheit in their breeding tank. The cooler water is necessary to boost their spawning, which is necessary for reproduction.

This kind of Black Pearl Killifish is a bottom spawner, meaning that it will lay its eggs and deposit them wherever in the breeding tank. Coco peat in a jar is one of the substrates that can be used.

When these fish reproduce in their natural environment, their breeding practices are fascinating to observe. During the breeding season, both the male and female are prepared to lay their eggs in the same nest. In this condition, the male will swim back and forth and all around the female in order to show off their most appealing colors.

After displaying his impressive finnage, the male moves around by lowering his mouth and beginning to dig into the bottom of the substrate in order to find a suitable location for laying eggs in the future.

During spawning in captivity, the breeding pair dips into the coco peat to lay their eggs, much as they would in the wild. You must pay close attention to the time when the spawning occurs.

Immediately after spawning, remove the peat from the breeding aquarium and squeeze out the majority of the water from the peat. And, b ecause the eggs are sensitive to light, it is necessary to store the peat in a dark and chilly environment.

In this condition, you should be able to preserve the eggs for many months to several years. Additionally, you can gather the eggs and place them in a plastic bag for about 2 to 4 months to incubate. In order for the egg to incubate, it must be submerged in water that is half an inch deep. Next, place the eggs in soft water to help them hatch more quickly.

In the wild, the Blackfin Pearlfish is dependent on insects and small crustaceans for its survival. This species enjoys live meals such as mosquito larvae, daphnia, tubifex worm, glass worm, and white worm.

When it comes to the aquarium, though, you can supply a choice of food that they will eat without issue. A variety of meals, including live brine shrimp, frozen blood worms, and freeze-dried tubifex worms, can be obtained in a short period of time from a variety of sources.

The Black Pearl Killifish requires regular feeding with a range of diets in order to survive and reproduce. This aids in the preservation of their optimal health and coloring. These aquarium fishes can be fed a variety of commercially produced flakes and pellets, which are now widely available. The rate at which the Pearl Fish fry is expanding is incredible.

These Pearl Fish fry have voracious appetites and must be fed at least 5 times per day to maintain their health. They can attain adult size in eight weeks if they have a sufficient quantity of live feed. And, t heir reproductive potential is fully developed by the time they reach the age of three. Depending on the location, they may require four months of growth during the wet season to reach maturity.

Black Pearl Killifish prefers to survive in water that is soft and acidic. Your fish tank should have lots of hiding places for them to hide in. Create these hiding places by adding some live plants as well as rocks, timber, and driftwood branches. They require these hiding spots in order to reproduce successfully.

This kind of Killifish is quite easy to keep in your home aquarium due to its small size. It is common for them to spend the majority of their time at the bottom of the tank searching for food in the substrate. In the tank, you can use a dark, sandy substrate or a base of small pea gravel to create a more natural look. In addition, please note that You should keep in mind that they need a minimum of 15 gallons of water to be healthy and comfortable in their tank.

Keeping your Black Pearl Killifish in the tank with other fish isn’t a problem. Some smaller catfish variations, such as Rainbowfish, as well as other peaceful fish, such as Tetras, Danios, and so on, are ideal options.

These Killifishes are typically found in schools in the wild, which means they must be kept in groups in order to maintain their health and well-being at their best.

When they are left alone, they can become stressed very rapidly. However, please bear in mind that having two or more male Black Pearl Killifish is extremely harmful. They have the ability to be aggressive against one another and battle for their own interests. It is preferable to have the right male to female ratio in place (1:10). If you are raising those species together, make sure to keep cool water available at all times.

Black Pearl Killifish care after setting up the tank

It is not difficult to maintain a Blackfin Pearlfish. To care for them, you simply need to change the water on a regular basis (every five to seven days, for example), and also never overfeed them. Even without a filtration system, a pair, trio, or maybe even two pairs of this Black Pearl Killifish can be kept in an unfiltered 3-gallon tank with no problems. All you have to do is supply some floating plants within the tank as well as a jar filled with coco peat in which they can lay their eggs.

A Killifish reproduces every year, and this fascinating tiny fish has a remarkable breeding plan. As individuals, the fish have a natural life span of just 12 months, making them a species that is only suitable for use in a normal aquarium. However, they make an excellent breeding project, and with a little forethought, they can be transformed into a wonderful cultural species that can be passed down from generation to generation.

Black Pearl Killifish is a very aggressive species that should be maintained in a separate tank at all times. Males may harass unreceptive females in an unduly aggressive manner. It is not recommended to maintain two males in the same aquarium.

How to decorate a black pearl killifish tank?

Make use of a dark substrate (peat) and offer hiding places for your fish with wood or roots. It is advisable that you filter their water tank by peat.