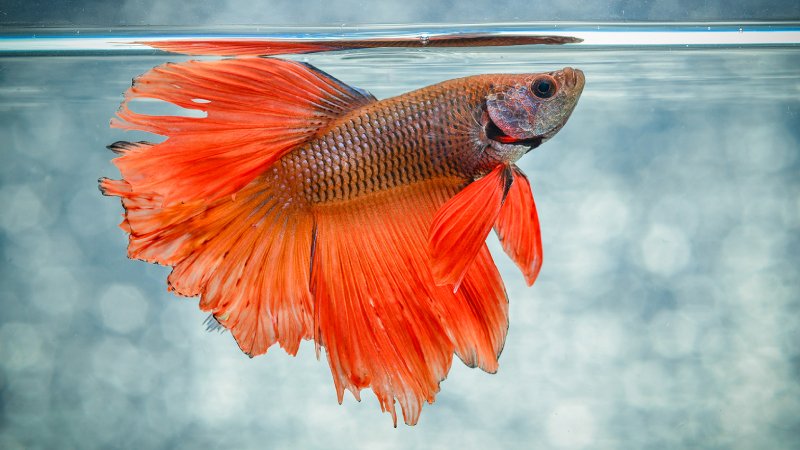 Getting betta fish for your home aquarium is probably one of the coolest things you could do. Typically, betta fish will prefer to be in the middle, not near the surface of the water. If you see your betta fish staying at top of tank, however, there is probably something wrong. So, why does my Betta fish keep swimming to the top? Let’s find out why your Betta keeps swimming towards the top of the tank.

Reasons Your Betta Fish Staying At Top Of Tank

There are some differences between bettas and other fish. Most fish obtain oxygen by using their gills. They do not have the ability to breathe with their mouths as we do. Betta fish have gills that allow them to breathe under water. Despite this, they also have the so-called labyrinth organ which works as a lung. Because of this structure, they are able to breathe air with oxygen, just like humans. With that said, Bettas are capable of surviving outside of water, but only for a short while. And during this time, the fish should remain moist.

It is likely that your betta fish is suffering from oxygen deficiency if you often find them at the top. The bettas that are struggling to escape the lack of oxygen might stick their mouths out of the water every once in a while.

The area on the top of the tank has higher levels of dissolved oxygen than the bottom of the tank, despite the fact that you can only see the fish swimming within this section. Although Bettas do not breathe air directly, it doesn’t mean they can have an oxygen deficiency.

For Bettas to survive, certain parameters must be met. It is recommended that you keep the temperature of their water between 75 and 80 degrees Fahrenheit and the pH between 6 and 8. Nitrites and ammonia levels are also to be kept below zero, as well as nitrates below 20.

Fish health can be affected by poor water quality. Despite being a hardy creature, Betta fish are susceptible to illnesses if they are exposed to unhealthy concentrations of pollutants such as ammonia, not to mention the wrong pH levels, because of the discomfort they will suffer. They will become distressed by this and try to escape the punishment by climbing to the top. The fish in some aquariums have been known to jump out of their tanks in order to escape the less than optimal conditions in the tank.

In terms of temperature, two considerations need to be considered. Bettas will run to the surface if the water is too cold, as the surface is usually warmer. The majority of this occurs in large tanks in the summer. However, if the water is too warm, then oxygen levels will plummet at the bottom and middle in response. As a result, the Betta will move to the top, where there is more oxygen. That’s why maintaining the optimum temperature is so important.

A small tank or too many fish may cause your Bettas to swim to the top because they cannot maneuver in the middle of the tank. Overcrowding may also cause conflicts between fish.

A Betta might also flee to the top if it feels threatened when in a tank with larger, more aggressive fish. A tank without plants, rocks, and decorations is more likely to experience this.

In regards to population, one gallon of water could be considered as the general rule of thumb for an adult fish of one inch in length. It is therefore necessary for a Betta fish, which measures between 2-3 inches in length, to have 2-3 gallons of water. If there were two Bettas, 4-6 gallons would be needed, and so on.

Betta fish are pretty smart. These fish know that they usually get their food from the top.You will see them swimming towards the top if they have gone without food for any reason. When they have looked everywhere else for food, they will also swim to the top. After feeding time, your Bettas may start turning to the middle of the tank.

When the swim bladder is not working properly, a Betta will have trouble swimming straight. Eventually, it will turn around and float to the top. Constipation can result from overfeeding, which can lead to swim bladder issues.

Constipated Bettas, in addition to swimming upward, will also start to swell. If you take a close look at the back of it, you will notice that stringy feces hang from its back. Normally, the feces of healthy fish fall immediately to the substrate, unlike the feces of diseased fish.

How To Keep Your Betta From Swimming At The Top?

A lack of oxygen in your tank will result in your Bettas gasping at the surface. To fix this problem quickly, you should add an air stone. As a result, the surface will become more agitated, allowing more oxygen to dissolve into the water (while still encouraging carbon dioxide to escape).

Alternatively, you can buy powerheads that create stronger currents in the water, ensuring a uniform distribution of oxygen in the tank. For large aquariums, that may be the better solution.

Whether your Bettas are escaping to the surface because of low temperatures or high temperatures are creating an oxygen shortage, you likely need a thermometer and a heater. The ideal temperature range should be 75 to 80 degrees F.

Maintain desired levels of nitrate, nitrite, and ammonia in your water by testing it regularly. Additionally, make sure that you have a reliable filter that will keep your water clean. Then, change your water frequently to eliminate waste and toxins. It is generally recommended to replace a third of your tank each week.

The last step is to get rid of dead plants. If there are decorations, wash them every now and then. Bleach them, then scrub them thoroughly with a brush to remove algae. Purchase a vacuum siphon pump if you don’t already have one. In addition to cleaning the gravel, you can also use it to remove any uneaten food and waste. There needs to be no doubt in your mind that Bettas cannot survive in dirty or cloudy water (at least not for long). You can avoid them escaping from the top only by keeping the tank clean.

Get the right tank size

Bettas require approximately ten gallons of water. Nonetheless, the larger the tank you need depends on the number of fish you have. It is recommended that you choose a tank that fits the needs of your fish.

In the event that you are unable to buy a new aquarium to accommodate all your fish, at least reduce the number of fish in the current tank. It is very important that you give your Bettas ample space to move around. If that is the case, they will be more likely to swim freely through the middle section of the tank.

Bettas should not be kept in an empty tank. You could give Bettas plants, rocks, and other decorations that they can use as hiding places. A large aquarium with larger, more aggressive fish than Bettas, for instance, should take special attention to this.

Providing your fish with a place to hide when they are stressed will reduce the likelihood that they will sit on top of your tank. Just be careful not to decorate with sharp edges. As soon as the fins are ripped, the Betta is exposed to parasites and diseases.

If you’re unable to feed your fish on time and in the right amounts due to your busy schedule, get an automatic feeder. As a result, your Bettas will be supplied in the correct quantities at the right time. The result is that your Bettas will not experience constipation and swim bladder disease.

In case your fish have already become constipated, delay feeding them for two to three days. Once their meals resume, give them boiled (and peeled) peas. Using this method, they are able to expel waste from their bodies.

In case you don’t have an automatic feeder, the best way to avoid overfeeding your Betta fish is to limit their intake to two meals a day. And you are able to realize whether your fish are getting too much food or not by observing  the uneaten leftovers in your aquarium.

Video: Top 4 Reasons Your Betta Stays At The Top of Their Tank

What is the reason my Betta keeps swimming to the top?

Your Betta is jumping on the surface because of the 4 common reasons as below:
Food is not enough for him.
There is a need for him to breathe more easily.
It’s an act of showing off.
He can’t breathe because the water is too high.

What is causing my fish to the surface to breathe?

If your fish is having difficulty breathing or if it has an ailment, it may be rising to the surface to breathe. And in case your fish have an abnormal tendency to come to the surface and not come back below, look for any signs of illness, such as blood or mucous in their water. Your fish may be experiencing a medical emergency if it exhibits these symptoms. Take it to the aquarium or hospital as soon as possible.

Can my Betta stay at the top all the time?

In this position, the water is more oxygenated than in other positions, which is why the top of the betta may linger. The betta will not remain in the water for too long if the flow rate of the water is set high enough so that oxygen is constantly flowing into the water. You should make sure, as well, that your betta has no particular preference as to which position it will be sitting in. It is possible to identify this by observing the activity patterns of your betta and observing the side he/she chooses.

Betta fish may prefer to sit higher up in the tank because they prefer doing so, so this does not mean that issues are present. Nevertheless, the presence of warning signs such as lethargy, loss of appetite, and faded colors may point to a problem. You should, in the case of such a situation, try to find out the causes as soon as possible so that they can be handled. The sooner you find the cause of your betta fish’s illness, the better chances your fish have of recovering.