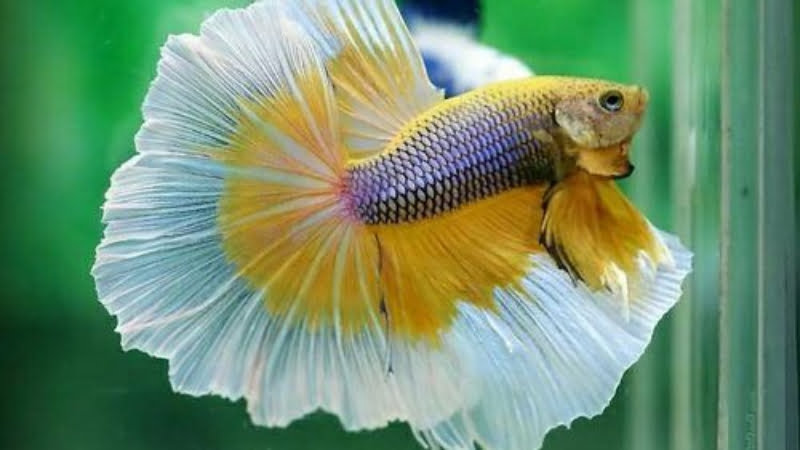 I am sure all of you have heard of Half moon which is one of the most popular types of beta fish. But have you ever heard of or seen a Betta fish Full moon? It is also a beautiful betta fish and will definitely bring stunning beauty to your aquarium. What are the differences between the two kinds of fish? Also, how to extend the lifespan of betta fish full moon.

If that’s what you want to know about these fascinating fish, keep reading this article

The full moon Betta fish come with a distinctive tail shape that is largely responsible for their name.

You will find a lot of information about Half Moon Betta Fish on the internet or anything else. We all know that the Half Moon has a single tail and it can reach 180 degrees when spread fully.

So, we can draw a logical conclusion that Full Moon means it has two halves or two half-moons. That is absolutely right. The Full Moon bettas have a double tail and reach more than 180 degrees when the tail spreads fully.

What Can We Do To Extend The Lifespan Of A Full-moon Betta Fish?

There is no doubt that the best ideal conditions are essential for making sure that all fish species live long and healthy lives. Full Moon bettas are no exception.

I have bred the fish for many years. All my fish usually live at least 4-5 years, even one lived for 7 years. It’s pretty cool, right? I will tell you what I have done.

The living environment, namely the tank environment, is the most important factor affecting the lifespan of fish. My first main success was doing water changes. Clean water is always something that any fish wants. No fish want to live in a dirty water source. When you change the water in the tank, you must take note of certain things. Don’t remove and replace all the water. You should change about 25% of the water each time and repeat this job twice a week.

I always raise them in long tanks, instead of tall tanks. It is because Full moon bettas come with big fins that tend to have problems swimming up in tall tanks to get air.

It is also essential to have a filter in the tank. But you should keep the filter working gently. That is because guppies have big fins that are like sails and if having too much current, they will be blown around and be exhausted.

Diet for your fish is another important factor we have to pay attention to. I will provide more details on what I am talking about in the following section.

When living in an aquarium, betta fish full moon also needs a day and night cycle as they would in the wild. So you have to make sure your tank is cycled by using an aquarium light to mimic the wild environment. Put the light on a timer or you can turn it on when you wake up in the morning and turn it off before you go to bed.

In the wild habitat, betta fish live with plenty of plants. So I mimic that, as best I can. I have kept a lot of live plants in my betta fish tank. That is the next thing I want to share, you should do that job. Live plants not only contribute to the quality of your betta fish’s life but the quality of water as well.

I am sure it is only after hearing what I am about to say did you notice the thing. You have never noticed the gravel in your tank, have you? It is an area that has a lot of waste. Let’s clean the gravel regularly.

Which Food Is Best For Full Moon Betta Fish?

As I said, diet is an important factor we have to pay attention to when wanting our betta fish Full moon live a healthy life and live to their full potential lifespan.

Try to vary the diet and feed the Full moon a high protein diet. Live or frozen food is the high protein source. Don’t feed them too much man-made food.

Live foods are better and more nutritious than other foods, in my opinion. Some great live foods you can choose include brine shrimp, moina, daphnia, scuds, fruit flies and their larvae but frozen food is still fine if you cannot give them live foods.

If you feed them frozen food, you should break the frozen cubes into smaller cubes because most may be quite big for one feed. Thaw them before throwing them into the tank to feed your fish. The rest of the frozen foods can be kept in the freezer.

Live and frozen crustaceans such as scud, brine shrimp, and daphnids not only provide high protein but also prevent possible digestive upset that is quite common disease in Betta fish. So it is worth using these kinds of foods.

In the wild habitat, bettas are surface-feeding insectivores like fruit flies. So if you do not have fruit flies on the surface of your tank, the crustaceans are the best closest alternatives to bettas’ natural food.

For dry food, I prefer Betta pellets sold in pet stores. If you want to keep your Betta healthy, you need to pick a pellet formula specially made for them. In case you choose pellets that are for other fish, it will not be healthy for your bettas.

After feeding them for 5-10 minutes, get rid of any excess foods that your betta fish does not eat. Otherwise, they will fall to the bottom of the tank and will degrade water quality.

Video: How To Distinguish Full Moon Betta vs Halfmoon Betta

What is the difference between Half moon betta and Full moon betta?

Why is it called Halfmoon betta?

Halfmoon Betta is among the most common types of Betta fish that can be purchased on the market. The name of this fish comes from its fins which fan out to 180 degrees.

How big do Halfmoon bettas get?

Including their tail length, long-tailed Halfmoon Bettas can typically reach a length of about 3 inches.

How much water does a betta fish need to be happy?

Ideally, the aquarium should hold a minimum of five gallons of water for your betta fish. Even though Bettas can survive in smaller tanks, just because they can do not mean they will be happy.

Fullmoon betta is a beautiful fish that will definitely bring stunning beauty to your aquarium tank. Keep in mind what extends their lifespan and what food you should feed them to make sure they can live as long and healthy as possible.