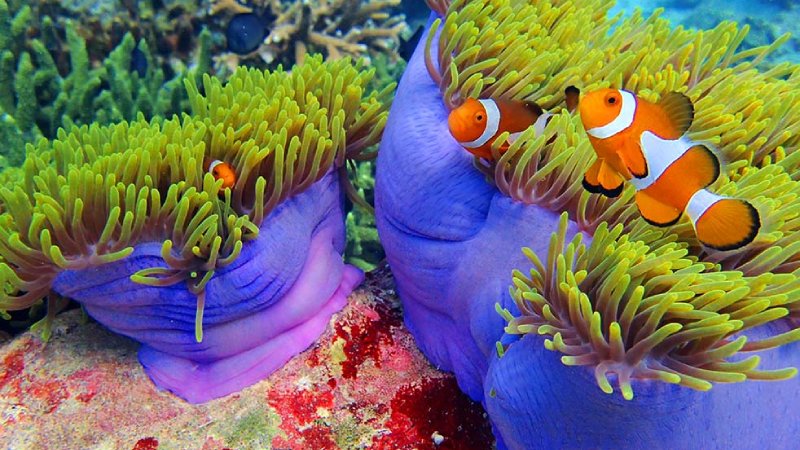 Clownfish make for the most adorable little pets, and as a proud clownfish owner, you probably want them to thrive in their aquarium. As clownfish originate from the ocean where they live in the shelter of sea anemones and corals. it’s important that you find a home that mimics this specific environment. Putting some in their aquariums will make them feel more at home. So, which are the best corals for clownfish?

In this blog, I will recommend some of the best coral for clownfish and some tips when your clownfish does not like its host.

What Makes Coral Suitable For Clownfish?

There are a wide variety of corals that can be good for clownfish, and many will work better depending on the type of clownfish you have.

The clownfish and Anthozoans (Anemones and Corals) take part in a symbiotic relationship that is the anemone provides a safe habitat for the fish by keeping potential predators away. In return, clownfish provide nutrients for the host and also clean the leftovers of algae from other fish.

Clownfish owners who desire for their pets to feel at home in the aquarium should invest in Anthozoans as they are instinctive for these fish. Plus, adding Anemones and corals can help illustrate an ‘ocean’ inside your home for guests to admire, as it will add beauty to your prideful aquarium.

Corals can make amazing hosts that your clownfish will love. These are usually more rigid in structure. Corals (and even anemones) are an essential part of natural reefs and they also contribute to bettering the environment of reef aquariums as well. Here is a list of a few corals that your clownfish might choose as a host:

Clownfish would love to live with corals in their aquarium, and these are a great option for anyone that loves reef-building. These can also help improve the environment of your water tank because they’re integral parts of natural reefs. Here is a list of a few corals that your clownfish might choose as a host:

Displaying vibrant colors such as pink, white, and cream with a white skeleton, Duncan Corals can add beauty to your tank. Unlike other corals, these have shorter tentacles and are also few in number, such that the skeleton can be seen as well. These are easy to care for and grow very fast. Ocellaris, False Percula, Orange Clownfish, etc tend to choose Duncan Colonies as their favorite.

Hammer Corals Often referred to as Euphyllia Hammer Coral or Anchor Coral. They have a unique look that can remind you of mushrooms because of their T-shaped tips and puffy tube-like tentacles. They appear in colors of blue-gray to orange, and often even fluorescent green.

These will sting other nearby corals and are considered to be very “aggressive”, so give them plenty of room. True Percula Clownfish tend to like these as hosts, but the corals themselves probably wouldn’t be that thrilled with it. So, it is best to just test it out before making a more permanent commitment with Hammer Corals.

Torch Corals, sometimes also called PomPom or Trumpet, are also another beautiful species of coral, which have illuminated tips that make them look like thin torches. These have large, tubular tentacles and can often be bi-colored with different colors for the tentacles and the tips, making them look illuminated.

While beautiful, certain clownfish can even kill corals or hamper their expansion by nuzzling them. This does not always happen as some clownfish like Oscillera can coexist with particular species of coral without problems.

Toadstool Corals are easy to care for, and almost any tank-bred clownfish like Percula Clownfish, Osciellera, etc. will host them. That makes these coral great for beginners.

Toadstool Corals are often called mushroom corals because they look a little like mushrooms. Toadstool corals have a long stalk and a small mushroom cap top (called a capitulum). As the cap grows, it folds up and looks a bit like a carpet anemone. When the polyps are fully extended, toadstool corals gain a fuzzy appearance. Every night – and a few times during the day – they look smooth when the toadstool retracts its polyps. The most common ones are peach or pinkish in color, while some may have green, “glowing” tips.

Zoanthid coral are one of the most well-known and easy to keep corals in the hobby. These “flowers of the reef” and the gardens that they will eventually create will blow your mind! The color morph combos of Zoa corals are practically unlimited and they are all very vibrant and beautiful. The polyps and tentacles can have some of the most amazing patterns of any coral. Each of these has different designs, which are often in circular forms, with tentacles on the edges, and they display a wide variety of bright neon colors.

Osciellera Clownfish may choose the vibrant zoa as their hosts.

Clownfish seem like they have very specific tastes, and they can thrive even without a host. But most tank-bred clownfish will gladly host anything they want, not necessarily anemone. So, there is no hard and fast rule as to which clownfish will host which coral or anemone.

The following suggestions are based on common experiences among clownfish owners and their behavior in natural environments. If your fish does not “like” the new host, there is nothing to worry about as this is quite normal with clownfish who are grown in captivity.

There is no need to fix anything in this case. Clownfish are not dependent on corals or anemones, so you can just leave them if your clownfish don’t like them. If your clownfish don’t end up liking the corals you introduced, they might find another host. Or you could introduce some other type of host and see whether they like that instead.

Sometimes though, even if the clownfish love the host, the host does not reciprocate and may stop expanding like with Torch Corals. In such cases, the corals can also die. It’s best to experiment with different combinations of clownfish and different host environments in order to find out what works best for your fish

Can clownfish survive without anemones?

Yes, clownfish do not need anemones to survive. They can survive without them in a domestic fish tank, where there is no danger of predators nearby. Nevertheless, they are essential to clownfish in the wild when there are predators close by and the symbiosis between the two is fundamental.

What is the symbiotic relationship between an anemone and a clownfish?

The symbiotic relationship between a clownfish and an anemone is a classic example of two organisms benefiting the other. The anemone provides protection and shelter for the clownfish, while the fish provides nutrition to its host via waste products while also scaring off potential predator fish.

Yes, clownfish can host in Torch coals. However, there is no guarantee for that to happen. Many clownfish ignore Torch corals and even harm them. Hosting is more likely to occur once the conditions in the tank are ideal, both for the clownfish and the torch coral.

Saltwater aquariums with clownfish are the perfect vessel to store, grow and display your amazing collection of corals and anemones. You can fill the tank with coral or anemones. That not only creates beauty for the aquarium but also creates a symbiotic relationship between clownfish and coral.

So, if you are a reef tank enthusiast and you own clownfish, you should check out the wide range of options that I have mentioned above for your clownfish to host. Hope you can choose the best corals for your clownfish.