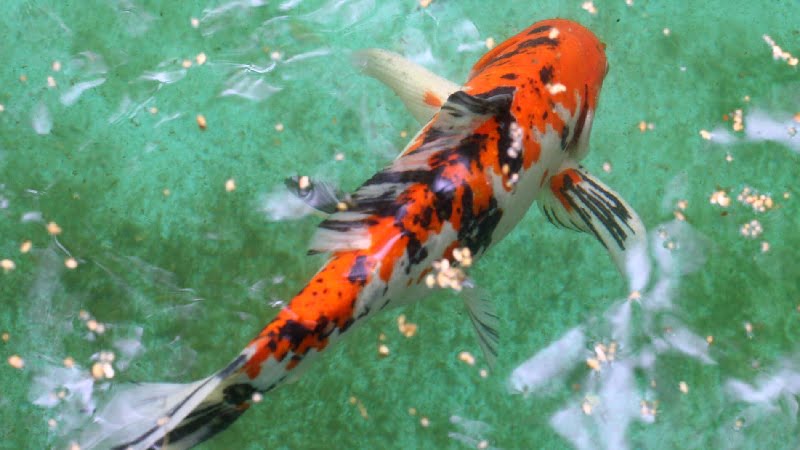 Are Koi Fish Aggressive? This is one of the most common questions that my readers often receive. First, you may know that koi fish are a type of carp native to East Asia. They are popular as ornamental fish in outdoor ponds and water gardens.

Koi are known for their bright colours and patterns. Some people believe that koi are aggressive fish, but this is not always the case. It is crucial to understand the temperament of koi before you decide to add them to your pond. Keep reading to find out now!

Koi fish are not aggressive by nature, but they can become aggressive if they feel threatened. If you have koi fish in your pond, it’s essential to ensure that they have plenty of space to swim and that their environment is not too crowded.

Koi fish are sensitive to changes in water quality. An imbalanced pond can cause aggression, so it is vital to maintain a healthy balance. Besides the mentioned factors, you can read other things you need to consider when caring for these fish. Let’s scroll down to discover!

How Do Koi Become Aggressive?

Though koi are generally calm and peaceful fish, they can be violent at times and may harass other fish depending on the conditions. We’ll go over the primary reasons koi might become aggressive and what you can do about it!

When males compete to fertilise eggs released by females, they can become hostile toward each other. In essence, the two individuals usually nip each other or push each other around a bit. This can be misconstrued as aggression when males pursue females because they often push the females into things or chase them.

Usually, these actions are not bullying or attacking; they are simply being done to assist a female release her eggs in order for them to be fertilised. When fish are spawning, they may sustain injuries, so ensuring that the quality of the water is excellent will facilitate their rapid recovery.

Stressed koi are more inclined to lash out (just like us). Your koi will be more vulnerable to sickness, disease, and bacterial infections. When they’ve had an illness in the past, stress might cause them to relapse.

Stress can result from excessive handling, crowded living conditions, lack of food or an unsuitable diet, polluted water, extreme water temperatures, being housed alongside incompatible aquatic animals, or even vying for mates.

Make sure you have enough predator deterrents in place to keep out common predators like herons, cats, and foxes, who constantly patrol the pond and stress the fish.

It’s pretty straightforward – if your pond isn’t large enough, your fish will most likely behave viciously as they compete for the area, food, and shelter. Putting two or more fish in a small pond could lead to fighting and result in nutrient overload, eutrophication, and algal blooms due to a nutrient overload. Never overstock ponds because the more space you can give your koi, the happier, healthier, and less aggressive they will be!

When a koi is ill or injured, it might get irritated the same way people do. Depending on the circumstances and the fish itself, some fish may lash out to avoid being seen as the “weakest link” while ill, while in other cases, the illness itself may change their behaviour so that they are not the same as before. It is possible for koi to become aggressive, agitated, or depressed until their health is restored.

Personality can influence whether or not a koi is aggressive. If your koi appear to be inherently hostile for no apparent reason, it is conceivable that you have an aggressive koi. When they are not pursuing other fish about the pond, fish with more aggressive attitudes frequently compete for food and are the first to the surface when food is available.

The quality of water directly relates to many of the other items on this list. If the water quality is poor, with too many nutrients or contaminants like phosphorus or ammonia, or if the pH or water temperature is wrong (too high or too low, increased water hardness, etc. ), your koi may suffer.

Your koi’s aggressive behaviour against its pond mates might be caused by a variety of factors, including disease, stress, or just being “odd.”

If you don’t have enough food, then your fish may not get along and become aggressive as a result of not being able to obtain the nutrition they require. You should feed your koi enough and give them the suitable types of food to ensure that they get all of their nutritional needs. For a carp to be happy and healthy over the long term, it must consume a high-quality pellet feed that contains protein, healthy fats, carbohydrates, vitamins, and minerals. Unsuitable Pond Companions

How To Prevent Koi Fish From Bullying Each Other

You can try my suggested methods below to stop your koi fish from attacking other fish in a pond or aquarium.

Ensure A High Quality Of Water

Other common-sense options include:

A good way to prevent nutrient overload is to regularly remove excess food and plant matter from your pond, use an effective filter system and aeration system, perform partial water changes whenever necessary, and test daily the temperature, pH, dissolved oxygen, ammonia, and nitrate levels of your pond.

Koi bullying can be stopped or prevented in a variety of ways. Put your naturally aggressive koi in a separate pond. For new arrivals, it’s better to quarantine them for a while, maybe by putting them in a separate enclosure or a secure tank, so they and the others in the pond can get used to them. Some pond fish can have a bit of pecking order, so it’ll take them a while to get used to each other.

Examine The Health Of Fish Regularly

Koi will benefit from having access to a range of natural and nontoxic plants in their pond, which will also enhance water quality. This is especially advantageous for shy koi, who can either flee from other koi that may harass them or hide to avoid becoming violent due to being exposed to interactions beyond their timid nature’s social tolerance. Artificial “koi shelters” can be used in conjunction with plants to provide fish with safe havens from predators and other fish.

Your koi will benefit significantly from including native and nontoxic plants in your pond, improving water quality, and providing valuable shelter. These can be particularly helpful for shy koi, as they can either run away from bullies or hide from them, which prevents them from becoming aggressive if they are exposed to more interactions than their nature allows. Along with plants, you can create artificial koi shelters that serve as safe hiding places for fish from other animals.

Which Fish Are Compatible With Koi Fish?

In a sufficiently big pond, goldfish may be raised alongside koi. However, koi’s bullying behaviour is typically directed against goldfish. This might be because they are frequently kept together, or it could have something to do with territory or breeding. Goldfish and koi can interbreed. However, because koi fish are often considerably larger than goldfish, their mating activity may be too harmful or stressful for goldfish. Other types of carp than goldfish may also be suitable pond companions for koi.

Catfish that feed on the bottom and enjoy the same water parameters as koi are a second choice for keeping with koi. Bottom feeders are unlikely to be bullied by koi since they frequently remain unseen and hardly leave the lowest sections of the water column. Catfish are typically more resilient than other types of bottom feeders, making them an excellent choice for koi that are too interested.

Fish from other ponds or rivers can be valuable additions, particularly in large ponds. Koi fish are nearly the same size as fish like perch and bass, at least enough to deter bullying. So you don’t catch half the fish in the pond. It’s best to keep koi with fish that can survive overwintering in the pond.

Despite your misconceptions that koi aren’t predatory fish, they are opportunistic eaters that eat whatever they can find. Koi will eat their own young, as well as other fish.

Can koi fish and goldfish get into a fight?

Certain types of fish, particularly fancy goldfish, have been observed to be aggressive towards koi.

Are koi fish and goldfish compatible?

The goldfish will breed with the koi. Some of the juvenile fish (fry) will be brown or grey when they first hatch and turn orange as they mature.

Koi has been a subject of debate for over one hundred years, and the answer is simple, yes, they bite. Do not let that discourage you from feeding your koi by hand or touching them.

Koi fish are not aggressive by nature, but there are a few things that can make them seem that way. If you have koi fish, it’s essential to understand what might trigger their aggression so you can avoid it. With a bit of knowledge and care, you can keep your koi fish happy and peaceful. Thanks for your reading!