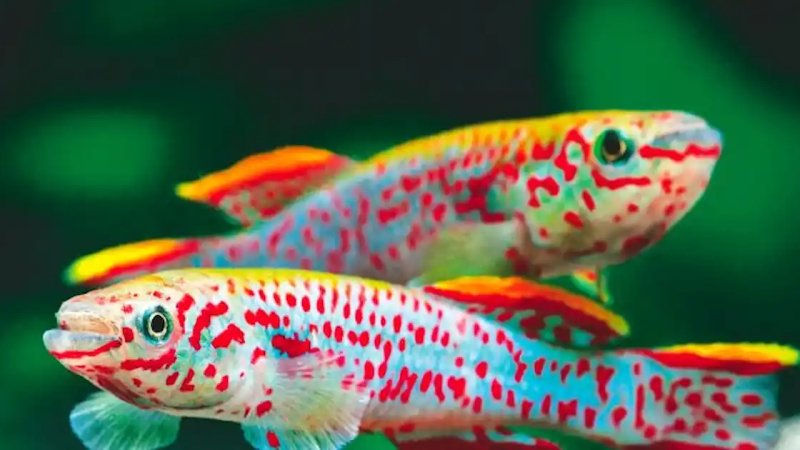 Killifish are not so popular in the mainstream aquarium hobby, and they may not be bought in local fish shops. However, they are one of the most colorful freshwater aquarium fish that will definitely bring stunning beauty to your tank.

For this reason, you should consider adding them to your aquarium tank. Now, what you are wondering is that “are killifish aggressive?” when keeping them. This article will help you answer that question and also help you set up an ideal tank to keep them healthy and happy.

Most killifish species are known to be passive and peaceful. If you are keeping them in a community tank, your killifish will generally get along well with other fish.

But if you ask me if they can be aggressive, I will say yes. Killifish can show territorial or aggressive behavior depending on the environment they live in.

But if you insist on keeping them together, you can handle that problem by providing your fish with lots of plants or hideouts so that the bullied male can escape from being attacked.

When it comes to keeping females killifish, you don’t have to worry too much as most of them are not as aggressive as the male species. So you can keep any number of them together as long as your tank has enough room.

Killifish are also said to be aggressive because they may eat tank mates, fry, and eggs that can fit in their mouths. But if other fish have a similar size, that will not be a problem, Killifish will make good tank mates. The most important thing is that you have to choose tank mates that require the same water conditions as the killifish.

That’s why we have to choose the tank mates properly and keep them in the right conditions to avoid aggression. I will provide more details in the following sections.

Killifish are known to inhabit a variety of habitats in the wild. Most of them are also quite hardy, and as such, replicating their natural environments in a tank setting is not too difficult.

You will need to decide the size and set up of the aquarium according to how many fish you plan on keeping and why you want to keep them.

The species of killifish will also determine whether you choose to keep your killifish in a saltwater or freshwater tank.

Most killifish like still water, and that’s why you should keep them in a tank with very little or no water movement. It is also best to keep them in a long, shallow tank, as they will occupy the top of the tank.

You should provide lots of live plants, especially floating plants. One type of plant that is suited for this is the cryptocoryne. This is because cryptocorynes are tolerant of low levels of light and thrive in the killifish’s environment.

It is possible to leave the tank’s floor bare, but most people prefer to cover it with dark gravel to make it look more attractive. In the event that you decide to use gravel, you should select one that won’t harden the water.

It is not recommended to use gravel if you want to get bottom spawners. You should use peat instead (so long as it does not contain any additives or fertilizers).

Also, it is very important to set out some hiding spots for your killifish; this can be rocks, roots of floating plants, or holes in wood.

The water conditions of your tank depend entirely on the species of killifish that will inhabit it.

The majority of killifish require water temperatures of 72-75oF, if you have just a single tank, you can use a regular aquarium heater. However, more serious killifish keepers who have a room full of tanks may instead heat the whole room.

The pH balance is different in each Killifish tank because each and every Killie has a different preference. For example, some come from soft acid waters and others inhabit hard alkaline waters.

The next parameter is water hardness. In most cases, killifish are best kept in water that has 120-160 ppm. Getting the water hardness right is not as necessary as getting the pH balance right. However, a few species are better bred when kept in soft water, and some species require hard water (for example, the Nothobranchius).

In terms of lighting, once again, it depends on the killifish species. Most killifish are used to sheltering from direct sunlight and therefore prefer tanks with low lighting.

Most killifish are not interested in high water movement. You should keep the water still.

In terms of filtration, if you decide to keep a small aquarium, you will most likely need to use a filter. Because the small tanks are easily polluted by building up waste quickly. But the filter may cause the water to move. To prevent that, you can do a 50-percent water change every few days.

If you have a large aquarium, you might want to consider using an under gravel filter.

Video About Are Killifish Aggressive?

What size tank do killifish need?

Killifish are generally small fish, but they are quite active, and some species can even be aggressive. In general, it is best to go with a larger tank for most species of killifish. The size of the tank is much larger than you might expect for a fish that is only a few inches long (5.1 cm). The best size tank for the majority of killifish species is a 20-gallon (75.7 L) tank.

Yes, killifish are fin nippers. When kept in an inappropriately sized tank or wrong tank mate, although killifish are usually peaceful, they can become aggressive. Especially, the males tend to be more aggressive than the females. It is best to keep the male killifish in separate tank.

After all, we have had the answer to the question “are killifish aggressive”. The answer is “Yes, they are”. But they are not always aggressive. They only show that behavior when you keep them in the wrong tank conditions and wrong tank mates.

Follow my guideline to setup up an ideal aquarium tank for your fish. I am sure that your fish will live a happy, healthy life.