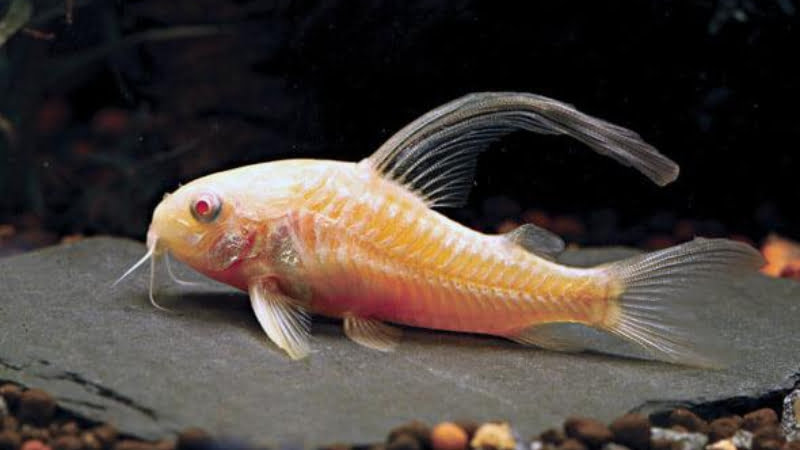 Adding an Albino Cory Catfish to your aquarium is a great idea. They’re calming and enjoyable. Many people, however, incorrectly assume that these fish are as blind as a bat due to their pale skin and crimson eyes. Their eyes are a sensitive part of their bodies, so it’s understandable why they’d say that.

Therefore, in the following paragraphs, I will tell you all you need to know about are albino cory catfish blind or not.

There is no truth to the rumor that albino catfish can’t see. They are quite active in their search for food, and as they do so, they have a tendency to swim in a disorganized pattern.

These creatures are well-known for their tendency to bump into objects and crazily swim at times.

Because they don’t seem to respond to objects like fish or barriers that are in their environment, you might conclude that they are blind.

Is there a problem with albino cory catfish’s vision?

Albino Cory Catfish may not be blind, but they will have trouble seeing, at least that is what it seems like they will experience. If you go through the vast number of internet forums, you’ll discover that many owners of these inquisitive fish will explain how their catfish swim about in a clumsy style. This is a common complaint among those who maintain catfish as pets.

They are going to run into each other, the decorations, and the glass, which is going to cause a lot of collisions. This kind of foolishness is what leads some aquarists to believe that the fish in their tanks are unable to see. However, this is not the case.

It’s simple that they just aren’t as interested in the activities going on around them as other fish are. They are just taking pleasure in their surroundings in their own particular manner.

Is it common for albino cory catfish to be blind?

Blindness is extremely uncommon among Albino Cory Catfish. Unfortunately, a large number of individuals have an inaccurate conception of albinism as being synonymous with blindness.

It is possible for Albino Cory Catfish to be born blind as a result of inbreeding or another genetic flaw; however, this is not a characteristic that is often seen in this species of catfish.

On the other hand, it is not unheard of for albino cory catfish to become blind as a result of being shipped or being kept with other fish that are too aggressive. In this instance, the individual’s blindness is the result of an accident, and the condition may be treatable.

If you have your Albino Cory Fish transported to your house from another location, you should examine their eyes as soon as you get them.

How To Determine If A Cory Catfish Is Blind

If you assume that the catfish you have is blind, there are a few things you can check.

Examine around their eyes

Make sure you check their eyes for any symptoms of inflammation or damage. It is likely that they are experiencing vision problems due to an illness or an accident that they have sustained.

Due to the fact that they are swimming so quickly around the tank, it is probable that they have collided with something that resulted in the injury.

Shine a light on them

You may try lighting them up with a flashlight and seeing if that helps. At first, rather than shining it directly in their eyes, try shining light close to them and all around them to see whether they respond to it.

If they don’t react to it at all, you can try shining it on them for a second or two to see if that gets a reaction out of them.

Video: Albino corydora swimming like crazy. Are they blind?

Are albino corydoras able to see?

Yes, they are able to, but their vision is severely impaired owing to the absence of a tiny pigment in the eye, a condition that is common with albino species.
As a result of their crimson eyes, many people believe they are visually impaired. However, this is a wrong understanding.
Due to the fact that they have limited eyesight, albino corydoras often depend more on their sense of smell (as a dog or a cat does). They use this ability to discover sources of food.

Are albino cory catfish blind due to their pinkish-red eyes?

One of the primary reasons why many people are under the impression that Albino Cory Catfish are blind is because of the delicate pink to red-eye color that they have.
Despite the fact that they will have vision problems, they are not completely blind. As a result of their albino status, they are likely to swim in a naive or careless manner.
In the case of Albino Cory Catfish, impaired eyesight is typical in albino animals, so it’s not out of the question to believe that this may be the case.
Neither their albinism nor their brown eyes are to blame if you have a blind albino cory catfish. When they were born, they already possessed this trait.
However, their eyes, like those of other albinos, are undoubtedly very sensitive to intense, white light. This means the tank’s illumination should be reduced.

How to tell if a fish is blind?

If you suspect that you are dealing with a blind fish, you can examine it with a flashlight or a penlight to confirm your suspicions. Inspect the area around their eyes for signs of infection, such as bleeding, edema, cloudiness, or discharge. In the event that your fish seems to have impaired eyesight and also shows signs of irritation, such as swimming into other fish or objects, you should contact an aquatic veterinarian as soon as possible.
If you find out that your fish is blind, don’t give up hope.
There is nothing that can stop them from living a long and happy life. However, it will want particular attention, feeding, and monitoring. As a result, you won’t be able to keep aggressive fish in the vicinity of it.