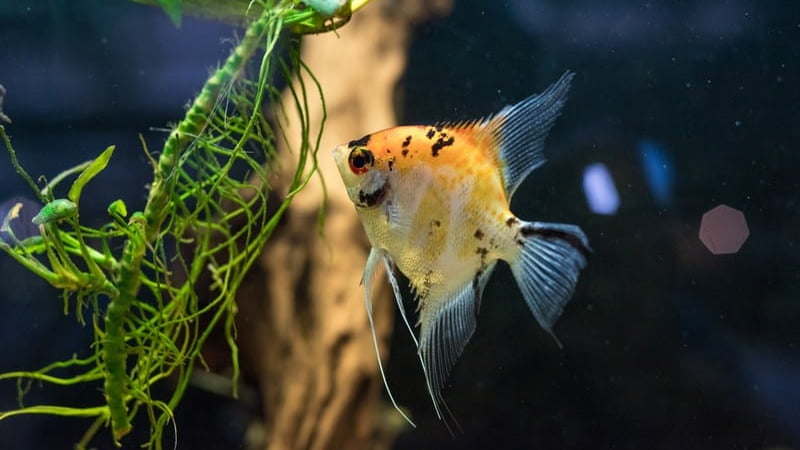 Anyway, there are still many dangers from what eats angelfish in nature in both the sky and underwater, such as fishes or birds that are larger than them. Angelfish are not a very big species compared to many others, except emperor angelfish which can grow up to 15-16 inches. Worse than that, if angelfish have to deal with aggressive, territorial, and cannibalistic fishes, they will be prey. These fish will kill and eat them if they have the chance to. Furthermore, overarching makes some angelfish species on the verge of being endangered. To survive, angelfish must develop the skills to fight or hide.

So, what fish eat angelfish, or what are their predators in general?

What Animals Eat Angelfish In Freshwater?

There’re four common species of angelfish predators, which are:

They share the trait of being carnivores, larger, sharper teeth, and aggressive if angelfish inhabits or reproduces in their territory. They are proficient hunters. Catfish are enormous, reaching lengths of up to 12 feet, and swift swimmers. They are opportunistic feeders, so they consume nearly anything that fits in their mouths.

What Eats Angelfish In The Ocean

Sharks are highly effective hunters, owing to their distinct teeth and extreme speeds. They have an ingenious method for hunting angelfish. They will herd their prey into areas where they cannot escape, such as against rock walls, throughout the reef. Even the gray reef shark hunts in packs, taking advantage of the abundant angelfish populations. Therefore, they pose the greatest threat to angelfish in the wild.

What Eat Angelfish: How Angelfish Protect Themselves

Angelfish in the wild can freeze in place when they detect danger. They can also determine how long they must remain still before bursting into action and escaping. Multiple species utilize this strategy in nature.

It is extremely important to freeze for a shorter period when encountering a predator. Angelfish in the wild will remain still for longer if they sense danger. This allows them to hide and observe a passing shark or barracuda. If they see the predator and are confident that it has seen them, they will act with less hesitation. Many other fish species lack this impressive ability to judge timing, making angelfish exceptionally intelligent.

A flat and slender angelfish can fit into crevices and plants that its predators cannot reach or enter. This makes flight an advantageous strategy. Having multiple escape routes significantly increases an angelfish’s success rate when attempting to flee.

Both freshwater and marine environments are extremely colorful and vibrant. Therefore, an angelfish’s luminosity and distinctive patterns have allowed it to blend in quite well. Even during sleep, the colors and stripes of angelfish fade, allowing them to maintain a uniform appearance.

Although angelfish are not notable hunters, they are aggressive. In fact, they have been observed eating smaller fish and fighting amongst themselves to protect their eggs or mates.

This fighting behavior is ineffective against larger fish, but it helps prevent smaller or similarly-sized fish from choosing angelfish as an opportunistic meal.

Similarly, fighting among angelfish contributes to the maintenance of the social hierarchy. Thus, they can form groups and swim together. Predators are less likely to target them in large numbers. If they are, the predators will have difficulty capturing them all, becoming disoriented by the waves of color and movement.

Sharp spine on the gill cover

Angelfish employ a sharp spine on each of their gill covers as a defensive weapon and to wedge themselves into reef fissures, making them more clever in nature.

Video: Why Angelfish Fight Each Other?

Are angelfish prey or predators?

Angelfish are ambush predators and prey on small fish and macroinvertebrates. Larger species hunt for angelfish, while angelfish consume anything that fits their mouths.

Angelfish are carnivores in the wild, and their prey is shrimps, insects, or worms. The Pomacanthidae family of angelfish are omnivores that feed on both marine plants and animals.