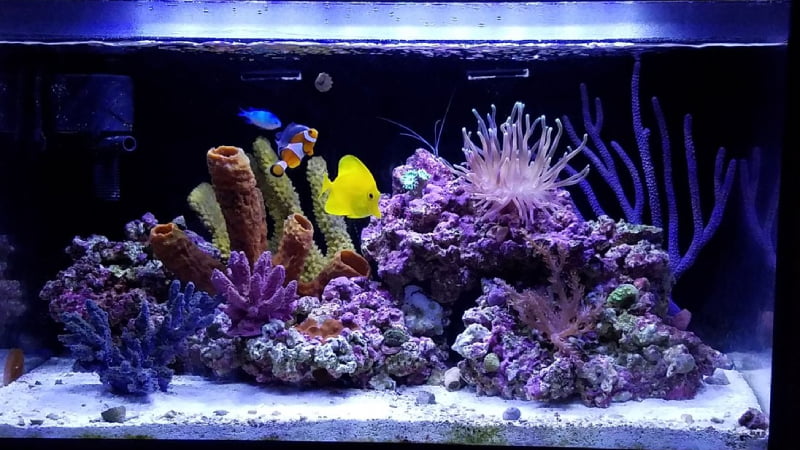 This blog post will cover multiple topics about multiple creatures in one tank including how many should be included, what size tank they need, and what other things you might want on your list of items for a multi-creature aquarium.

The clownfish is the most popular marine aquarium fish. It’s known for playing a pivotal role in Disney Pixar’s “Finding Nemo” and “Finding Dory.” There are 28 different species of clownfish, as well as many color variations, such as pink, black, brown, orange, etc, or multi-colored stripes.

The cinnamon clownfish is one of the larger species and can grow to 5 inches in length! They’re semi-aggressive, so it’s important that they should live in a fish-only tank.

Maroon clownfish are often known to be aggressive, even with mated pairs. Combined with their large size, it is best not to place them alone in a tank because they will become stressed due to lack of space.

The pink skunk clown has a timid personality, which often leads it to be the victim of bullying. The species can survive in small groups clustered around large anemones, and they will only grow up to 4 inches long. They also live for at least 20 years when cared for by people who can keep them in captivity.

Saddleback clownfish usually grow between 4 to 5 inches long and are fairly aggressive, but found on reefs near anemones. They can live in a community tank with smaller fish and easier-to-care for rocks and plants.

Tomato clownfish have a similar territorial nature as their cousin, the cinnamon clownfish, but are slightly more aggressive. Some other marine fish might experience harassment from tomato clowns if they’re not watched closely when the tomato starts to mature.

The percula or orange clownfish is not as large and aggressive as other types of clownfish but has proven to be an excellent addition to a community tank.

Are Clownfish Good If You Leave Them Alone?

Clownfish are genetically genderless until they reach a certain point in their life. When two of them live together, the dominant one becomes female and the submissive one becomes male.

However, when a sole clownfish is placed in a tank by itself, it will lean towards becoming female. Since there is no companion to suppress it, the gender of the fish doesn’t really matter—it either becomes male or stays as female.

Clownfish don’t seem to mind living alone until they get used to their surroundings. If you want to keep a pair of these fish (suitable for a new tank, where no other clownfish previously lived), it is best to buy them at the same time and introduce them simultaneously into the aquarium.

Is Putting Multiple Clownfish In One Tank Necessary?

Clownfish often live in small groups in the wild, but they are not schooling fish. They can be considered “pairing” fish, where one dominant female and one smaller male will mate for life. You should only house two clownfish together with an anemone in captivity.

Most animals live in pairs or other small groups. Clownfish don’t need to be kept separate from one another, but should always keep company with their own species. This way they can still find romance while living peacefully without any aggressive behaviors.

Ways to keep the clownfish’s aggression down

To reduce aggression among clownfish, you should keep them in a large tank with plenty of room. Ensure the environment closely resembles their natural habitat by supplying abundant plants and live rock to replicate an oceanic coral reef.

Clearer: To reduce aggression among clownfish, purchase a larger aquarium and mimic their natural ecosystem by installing plenty of live rocks

Although you should keep clownfish of the same species in one tank and no more than two, there are other factors to consider when keeping multiple clownfish. You also need to allow periods of darkness for 12 hours each day, as clownfish tend to be more aggressive during the daytime with plenty of (sun)light.

The most suitable tankmates for clownfish

Keeping multiple species of clownfish in a community tank can result in an unfavorable outcome, not because they are particularly territorial but rather with regard to size and temperament.

Cinnamon clownfish should always be kept with bigger species like tomato or saddleback clowns, but they can occasionally be kept with a smaller species – such as true percula – provided that you have a very large tank.

Saddleback clownfish, or Amphiprion polymers, may be kept with other small species of clowns but require a larger tank. A good option is the tomato clownfish (Amphiprion frenatus) which can also live in smaller tanks of less than 60 gallons.

Adding other fish to a tank with clownfish is challenging. The best options are creatures of similar size or larger, and whose preferred temperament matches the clownfish’s. Choosing skittish or timid creatures is not recommended as they’re likely to be bullied by the more assertive and dominant adornment

When stocking a saltwater aquarium, you must consider two important factors: the size of the fish and the size of your tank. Don’t add smaller fish to an aquarium that already had a clownfish in it. This will incite aggressive behavior or territorial characteristics from your own clownfish.

Nighttime introductions are best for notoriously territorial clownfish but don’t forget the rule-of-thumb for stocking an aquarium which is ½ inch of fish per gallon of water.

A tank only has limited space, which means that overcrowding will cause stress for all the fish. Leaving plenty of room for each individual fish means they can swim freely and still feel safe in their surroundings. A tank that is crowded isn’t a pleasant environment for any of its inhabitants because they are facing overpopulation. Therefore, please be noted that a larger aquarium is always better.

How many clownfish should be kept in a tank?

The best way to balance aggression and partnership life is to keep clownfish in pairs. To grow a school, get yourself a comparatively large tank.

What needs to do to reduce the aggressiveness of clownfish?

Which species of clownfish will be the best tankmates?

To conclude, for a successful aquarium with multiple clownfish, make sure you provide them with plenty of room to explore and swim. If you only have one small tank, the larger species in your assortment may bully or attack any smaller ones that it sees as potential competition for resources.

Hopefully, you’ve my article had shed some light on your question. Thanks for reading and good luck with your clownfish saltwater aquarium!