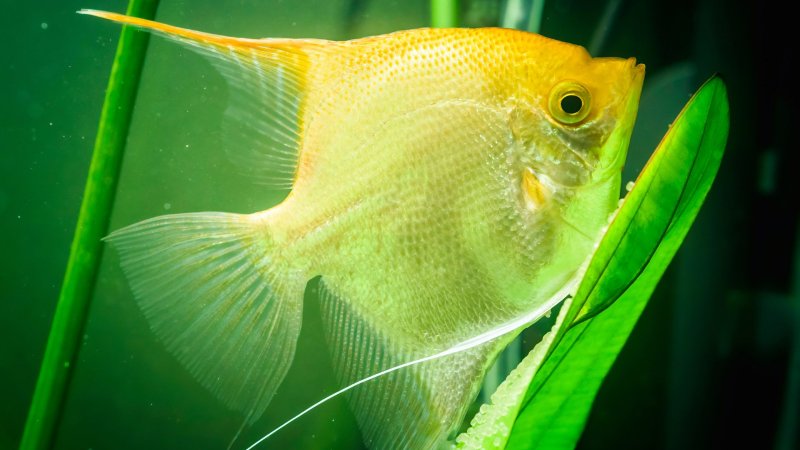 Many tank keepers want to move the angelfish pair to a breeding tank when they are about to lay eggs. To catch this moment, we must know how often angelfish lay eggs. That’s why I have researched this topic.

Angelfish may take some time to spawn, but there are several things you can do to ensure that the spawning occurs. Additionally, there are a few reasons why it takes them so long.

Keep reading this article to find out all about “how often do angelfish lay eggs.”

How Often Do Angelfish Lay Eggs?

There has been a study that researched the breeding intervals of the angelfish. The researchers distinguished between older and younger females (those over and those under 1.5 years of age). Researchers measured the spawning frequency of 204 females.

This may seem like a very long breeding frequency, but it’s important to remember that many things are happening during this period.

The male and female angelfish pair up first. They then choose where to spawn. They will begin to lay eggs once they have located a suitable surface. A female angelfish will lay eggs repeatedly and may produce up to hundreds of eggs per cycle. In the meantime, the male will go toward the eggs and continue to fertilize them.

About three days later, the eggs should hatch. If the fertilization had failed, the eggs would typically turn white, and the process would have to be repeated. As opposed to this, if they hatch, their parents will now take care of the fry.

In either case, the female will maintain her breeding intervals, and she is likely to lay eggs again in about 12 to 18 days.

It must be noted that the process above is only implemented when the conditions are ideal for the angelfish. There can be many obstacles to breeding fish on your own.

For example, if you choose an angelfish pair that hasn’t matured yet, it could take months for them to even begin breeding. Therefore, following the steps below will enable you to reduce the breeding intervals of your angelfish pair.

How Can I Shorten Angelfish Breeding Intervals?

Use A Breeding Tank

Angelfish would spawn more quickly if they were not housed together with other species. When the aquarium is already empty of other fish, you will save a lot of time because they don’t need to protect their territory now.

Additionally, there is a higher chance of the eggs hatching if there are no hovering enemies near the eggs. This will also make it easier for the fish to choose the appropriate spot for spawning since no other fish will be able to contaminate the surface, which has to be kept clean at all times.

Choosing a pair that has reached maximum maturity would be the first step in this section. If you move them before they are ready to reproduce, you may need to wait several months for the couple to begin reproducing. If you have owned angelfish for a long period of time (over six months), you can be confident that they are ready.

Step two would be to look for pairs that have already paired. You should make sure males and females are in the same pair.

If you notice the male and female swimming close to each other, it’s likely that they’re pairing up and you can move them to the pairing tank. However, you should wait a couple of days to be sure they continue to act like this.

You need to provide the pair with the ideal conditions so they can breed as soon as possible. Generally, you should set up your mating tank in such a way as to mimic their natural habitat.

Breeding angelfish require a certain water temperature. It should be around 80 F. In fact, if the water is too cold, it may even cause the angelfish to die before they reach the stage where they are supposed to spawn.

Feed Them More Than Usual

When you are trying to breed your fish, you should feed them more frequently after you learn their feeding schedule. As an example, if you had been feeding the angelfish twice a day, now you will feed them three times a day.

In addition, the food should be enriched with protein. Some examples are Beef heart mixture, Blood worms, White worms, Flakes,…

Use A Breeding Surface

If a proper spawning area is provided for the angelfish, the intervals between egg laying can be kept to a minimum. It does not matter what you use, but what shape it takes.

In general, they require a broad surface. You can, for example, use artificial plants that have large leaves. If you are willing to go the extra step, I recommend that you use breeding clay to create your breeding environment. The fish usually have a wide choice of areas available to choose from as these structures are usually designed in a cylindrical shape.

Apart from providing a possible place for laying eggs, plants also serve the purpose of providing a sense of security. Angelfish are less likely to choose to spawn if they are stressed, even if they have matured enough to do so. This might explain why companion fish prolong the interval between spawning.

Even so, when the male and female are alone, they should feel as though they are in their natural habitat. To achieve that, I would recommend adding a few plants to your breeding tank.

Once you’ve moved the pair into the breeding tank, my experience suggests that it is better not to replace any water at all. But sometimes, you don’t have a choice because things take time.

You should replace the water gently and avoid harsh movements in this situation. Instead of replacing the water all at once, you may choose to replace it gradually. Every week, you could take out a cup of water and replace it with the same amount of clean water.

Whenever you do so, you must make sure that the desired temperature and pH levels are always maintained, in order for breeding to take place properly. You should maintain pH levels between 6.5 and 7.1, with 6.8 being the ideal value for reproduction.

What Should I Do When The Intervals Take Too Long?

Even though you have provided all the conditions needed for successful breeding the female is refusing to lay eggs, even after more than 18 days of waiting.

Maybe the problem isn’t that you have done anything wrong, but rather that the pair is not compatible. If you are sure there is nothing wrong, you can try the following steps.

One of the worst mistakes you could make would be breeding a pair of angelfish of the same sex. Although it sounds silly, this situation is common because angelfish are known to be challenging to distinguish between the male and female.

Besides the pointy tube shape males have and the cylindrical form females have, there are a few other characteristics you can use to determine angelfish gender:

Get A Larger Tank

Angelfish require a relatively large tank to raise their fry. If you move the pair to a separate aquarium, you will need an aquarium that holds at least 5-10 gallons (19-38 liters). The breeding period will begin all over again once you switch to a larger tank.

Observe the behavior of the angelfish and try to determine if you notice anything unusual that could mean they are about to breed. The earliest sign of spawning would be cleaning spawning surfaces.

Switch Your Pair Or Buy A New One

It could be worth trying with a different pair of angelfish if everything went well, and you are certain both males and females are there. It’s hard to find out why they aren’t breeding, but we must accept their choice.

If you have more angelfish in your community tank, you may want to pick a pair that have been swimming next to each other for quite some time. However, if you do not have any breeding pairs, then you may consider buying one from the pet shop. Furthermore, by doing this, you will also be able to consult with experts and find out what might be causing the issue.

Video About How Frequently Do Angelfish Breed

Breeding angelfish is relatively easy in captivity. In a tank with the right conditions, angelfish can hatch into larvae and eventually grow into adults. You will be well on your way once you have learned how to breed angelfish.

At what age will angelfish lay eggs?

The angelfish have the ability to lay eggs as often as they can when they reach maturity, which generally occurs when they are between 6 and 12 years old.

When do angelfish stop laying eggs?

There are some lines in which female angelfish stop laying eggs around the age of 3 years old, which is unfortunate because this seems to be a genetic trait that is passed down and there’s no (practical) way to prevent this gene from being passed down.

An angelfish breeds every 12 to 18 days, depending on the age of the females. Older females lay eggs at shorter intervals when compared to younger ones. Usually, this occurs between the ages of six and twelve months, after the female angelfish has attained sexual maturity.