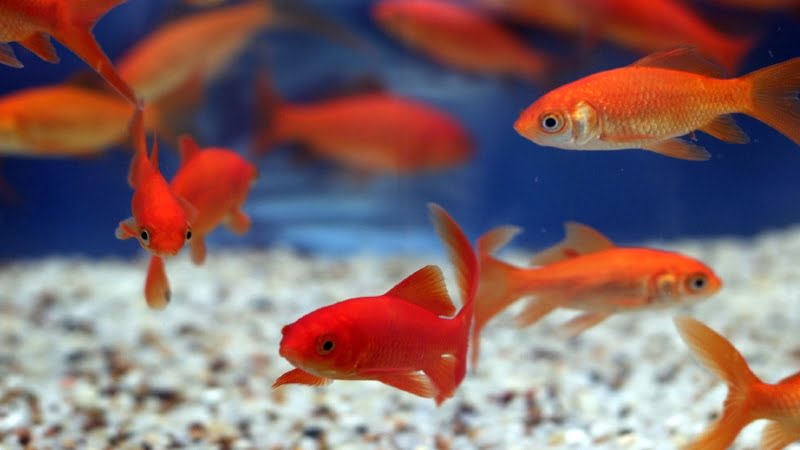 What do we call a group of goldfish? Are these lovely friends’ memory reset every 3 seconds? What else don’t we know about goldfish? Before purchasing a bunch of goldfish and jumping to conclusions, we must break down the most popular myths and facts about this fish species. If you are ready to explore the 7 most common mistakes and truths, humankind knows about these beauties, jump on the bandwagon with me.

#1. Myth: Goldfish can only remember things for 3 seconds

This is probably the most common mistake people make when thinking about goldfish. Imagine how hard their life would be if they remembered things for 3 seconds only. The truth is that a goldfish’s memory lasts for about 5 months. So they won’t be swimming around in a bowl, not remembering their tasks or purpose in life.

In general, they do remember what they want to do at the moment. They swim, feed, and play with a full conscience. Goldfish can even jump when they are excited. In other words, they have a sense of time and existence. They are woke!

#3. Fact: A group of goldfish can attack and eat each other…but not frequently

Goldfish are very peaceful creatures, and they coexist well with each other. However, goldfish can react violently towards the smaller ones or other fish species depending on the situation.

For example, if the size of the tank is too small and there are too many fish, goldfish will attack each other. And if we don’t separate the young ones from the adults, the adults can even feed on the small fries if there isn’t enough food. If it fits their mouths, they eat. Cannibalism is not uncommon in the world of goldfish!

#4. Fact: Goldfish are the easiest fish for beginners to take care of

It’s true! Goldfish are so easy to take care of that any beginner can purchase them from the store and have them for at least 3 years, with decent enough care, of course.

If you are a newbie aquarist or simply are a first-time pet owner, choosing a pretty goldfish is a great choice. It takes minimal effort and cares to keep them healthy and happy.

Even though most of the goldfish on the market are gold, we can still find those with more color variations. We can encounter black moors, which basically are black goldfish. This breed is totally pitch black and will add a unique touch to your aquarium. It doesn’t just have some black specs on its body. Some goldfish even have blue metallic scales, but those are very rare and almost impossible to get from a general pet store.

#6. Fact: Goldfish shouldn’t be kept in a bowl

We have seen movies where people keep their group of goldfish or one goldfish in a single bowl. But this is not beneficial for the fish itself. Providing a generous space for fish to swim is an act of kindness that any fish pet owner should have. If kept in a bowl for too long, a goldfish will stop developing typically in size while their organs expand, leading to premature death. We love our oldie goldfish, so it’s best to give them their space

That’s totally wrong. On average, a goldfish can live a very long and prosperous life, from 12 to 15 years. Some even live for over 20 years. Of course, this happens only when the owner knows how to take care of the fish by giving it a well-proportioned diet, providing it with a clean tank and good oxygen addition, and filtering the environment from bacteria.

A goldfish goes a long way as long as we give it enough attention, under 30 minutes per day.

Video: Goldfish facts: some of the most popular pets | Animal Fact Files